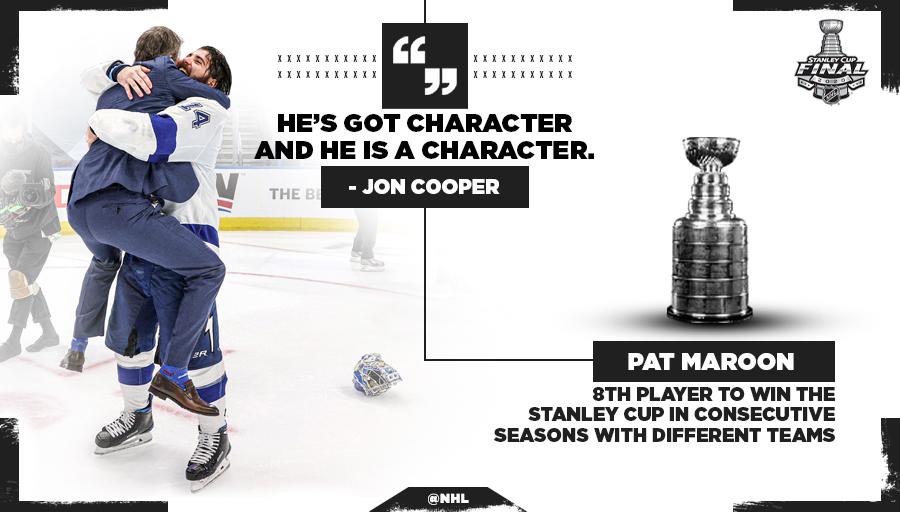 Tampa Bay coach Jon Cooper brought Maroon in to the team this year fresh off the Stanley Cup. The decision ended well as the Lightning also claimed the Stanley Cup Monday night, Sept. 28, 2020.

Maroon, now dubbed the “NHL’s latest good-luck charm,” is only the eighth player in NHL history to win the Cup back-to-back with different teams and only the third in the expansion era that started in 1967. Along the way to the Stanley Cup Finals, Maroon said he had his own good-luck charm in Officer Tamarris Bohannon, the St. Louis officer who was killed in the line of duty in August. Maroon wrote Bohannon’s name on his hockey stick during a victory that sent the Lightning to the Eastern Conference Finals.

“To be in that category is something amazing,” Maroon told NHL.com. “… I can’t believe I’m in this position again. … This is amazing. An amazing accomplishment for me and my teammates, and I’m happy to be still playing here.”

But Maroon has accomplished back-to-back celebrations with the Cup in ways no one else has, with the first-ever taste of victory for his hometown team coming in a Stanley Cup victory for the ages after years of playing for other teams followed by a season delayed and shortened by the COVID-19 pandemic.

“They were both emotional years, I guess,” Maroon said. “St. Louis was obviously different going from last (after games of Jan. 2) to first and then making that amazing run. And then this year with the pause (to the NHL season March 12 due to concerns surrounding the coronavirus) and then being in this bubble, two different scenarios but two amazing groups and I wouldn’t have done it without these guys.”

A St. Louis native, Maroon signed a one-year contract with the Blues on July 10, 2018. He scored seven points (three goals, four assists) in 26 Stanley Cup Playoff games to help St. Louis defeat the Boston Bruins in seven games. Maroon had six points (one goal, five assists) in 25 postseason games for the Lightning, including an assist on Blake Coleman’s goal in the second period Monday to help close out the series in Edmonton, the hub city for the Finals.

Due to salary cap issues and in an effort to free up enough money to sign goalie Jordan Binnington to a long-term contract, the Blues chose not to re-sign Maroon last year.

Just before heading to Florida to play last year, he visited his alma mater Oakville High School so that journalism students there could interview him. Maroon was a junior hockey star while still in Oakville High School, attending the school on and off while he was off playing hockey out of state. He led the high school’s hockey team to a state championship and another year as state runner-up while he attended in the mid-2000s, before graduating in 2007. Maroon attended Rogers Elementary, Oakville Middle School and Oakville High School. And just like he did for the Blues, he wore lucky No. 7. He wears No. 14 for the Lightning. The Oakville Tigers Marching Band performed in the Blues Stanley Cup parade (see photo gallery below).

Once in Tampa Bay, Maroon couldn’t resist telling his teammates constantly what it was like to win the Stanley Cup, which may have spurred them on: Captain Steven Stamkos said at the arena celebration, “Wow, this thing is ours. We were getting sick and tired of Patty Maroon telling us all year about how amazing it was to win the Stanley Cup,” as quoted by the Tampa Bay Times.

After winning the Cup 2-0 in Edmonton versus the Dallas Stars, the team flew back to Tampa Bay and had a celebration in Amalie Arena with people associated with the team and some season ticket holders.

The Lightning have only won the Cup one other time in franchise history, although the team has made it to the Eastern Finals four out of the last six years.

Lightning coach Jon Cooper credited Maroon for accepting what he was given on a team loaded with high-end skill. Maroon scored 23 points (nine goals, 14 assists) in 64 regular-season games.

“He’s a good teammate,” Cooper told NHL.com. “He knows his role, so he’s knows the minutes he’s going to get. I’m a big believer in giving guys roles and make sure they all know what they are, and he knows his.

“He’s got character and he is a character, so it’s kind of two good attributes to have. Really good team guy.”

Maroon’s latest championship run also marked the second year in a row that his team beat the Dallas Stars on the way to the Cup. Lord Stanley would have returned to St. Louis no matter who won, because Stars goalie Ben Bishop is also a St. Louis native.

During his time with the Cup last year, Maroon took it to the rink in Green Park where he grew up playing, and ate toasted raviolis out of it on The Hill.

See how Maroon celebrated the Cup:

Relive the Blues Stanley Cup parade last year with our gallery, including players interacting with the Oakville High School band: