For months now, the most cases have been seen in South County 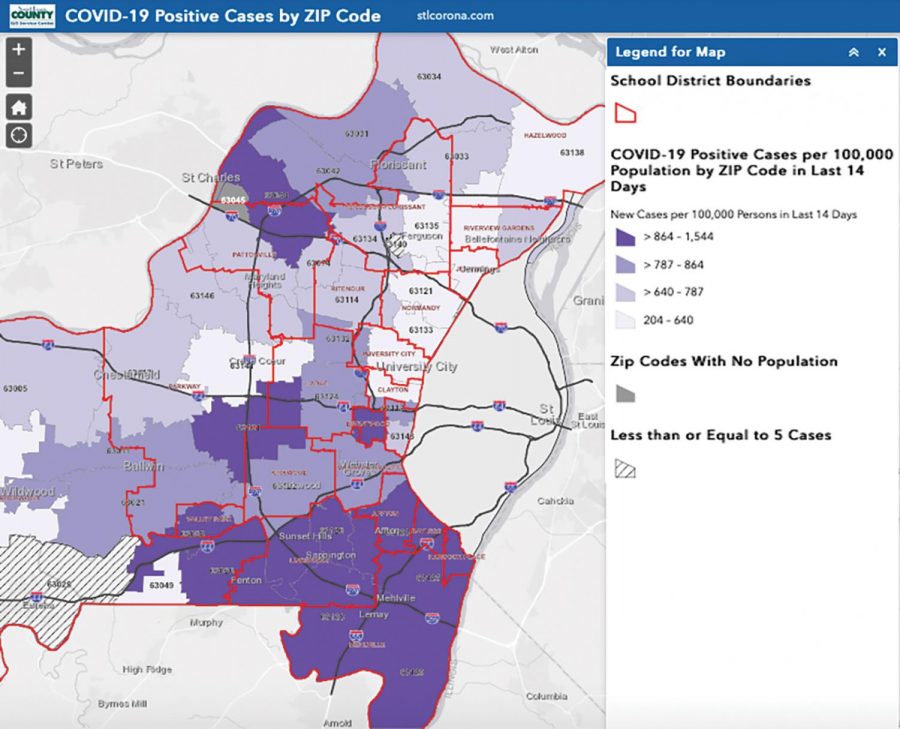 South County had the highest concentration of COVID-19 cases in St. Louis County for the last two weeks, continuing a disturbing trend that started in the summer but has become more noticeable heading into winter.

“The highest concentration of cases is in South County, south St. Louis County, we know that,” said County Executive Sam Page Nov. 30. “We see less masking compliance in general in South County, but we’re getting there —  the community is responding, and we know that they want to do what they have to do to protect their families and their loved ones. But we do recognize that COVID is being transmitted at a much greater rate in South County, and we hope to continue to get more compliance with our public health orders in that part of our community.”

The same report showed that while South County has higher case counts and positivity rates, it has lower rates of testing than other areas in the county.

Central County and West County had higher rates of testing going into Thanksgiving, with South County ranking in the middle of the county’s regions.

As of Sept. 14, the county had received 37 percent of its complaints about businesses not enforcing the mask mandate in South County, compared to 34 percent in North County and 29 percent in West County.

The county did not respond with updated data last week.

The reason behind the higher case numbers in South County could trace back to geography: The highest numbers within South County have consistently been reported in Oakville’s 63129 and Concord’s 63128 ZIP codes, which are close to Jefferson County.

That was true at the time of St. Louis County’s last two-week report heading into Thanksgiving, when all the darkest areas of the county were in South County, signifying the highest numbers of cases.

Arnold and Jefferson County have also repeatedly been singled out by the task force as having the highest numbers of cases per ZIP code alongside Oakville and Concord, and Jefferson County has gone in and out of the “red zone” but had not taken any countywide measures to stop the spread of the virus until late November. After months of debate, Jefferson County finally implemented a mask mandate Nov. 25.

Page said he believes that mandate could help efforts to combat the virus within St. Louis County’s borders.

“There is a lot of back and forth between South County and Jefferson County — we believe that their recent mask order will help us a great deal,” Page said.

The science behind face masks is indisputable after multiple studies have shown they work, but has been damaged by misinformation, said Akhtar.

“The simple science behind this is wearing a face mask keeps you from passing COVID to other people and most recently it’s shown that it also keeps each person wearing it from getting ill, so face masks do work,” Akhtar said.