‘Something has to be done’ about bridge, fire chief says 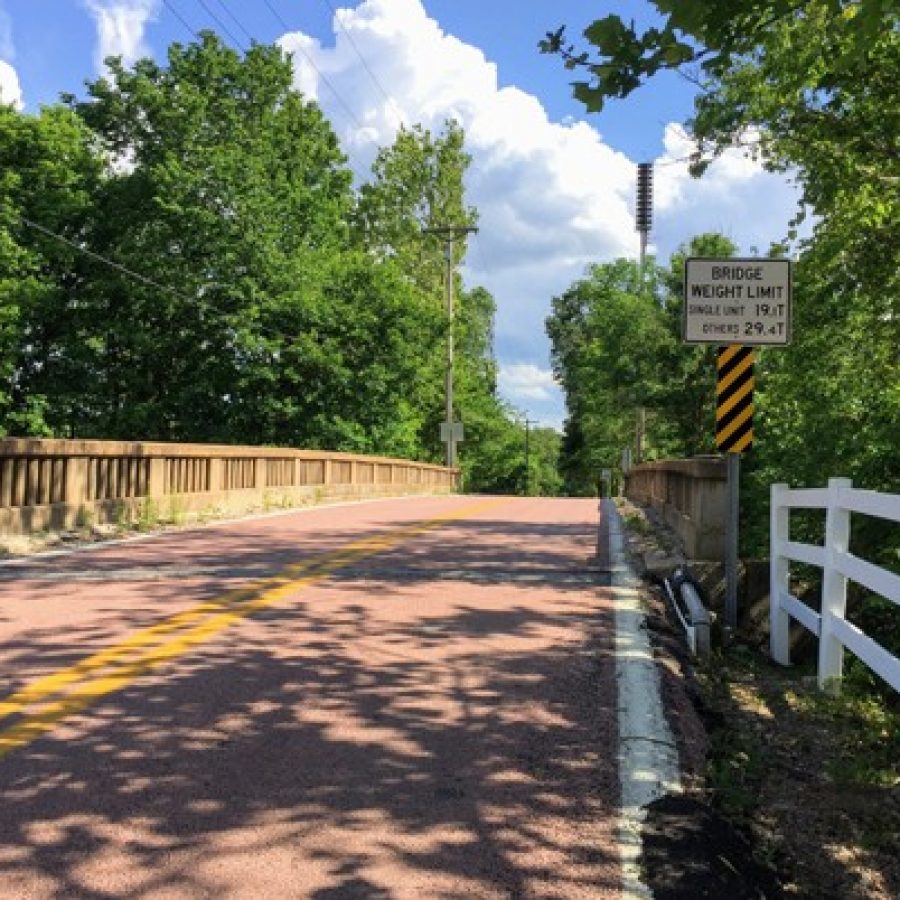 The Lewis Road Bridge in Eureka.

As the County Council continues to clash on replacing a bridge in Eureka, the city’s fire chief said he worries the council could be jeopardizing his residents with politics.

Lives could be on the line as the council weighs whether to approve the $2.5 million replacement of the Lewis Road Bridge, along with the nearby and similarly dilapidated Allen Road Bridge, Eureka Fire Protection District Chief Greg Brown said at the May 23 County Council meeting.

“Something has to be done,” Brown said. “We’re very concerned about public safety and trying to cross over the bridges in the event of an emergency, and the weight of our fire trucks potentially doing more damage to already crumbling bridges.”

The council voted the bridge down April 11 in a 4-3 split, with 6th District Councilman Ernie Trakas, R-Oakville, voting with most council Democrats against the bridge.

County Executive Steve Stenger asked State Auditor Nicole Galloway to launch a state audit looking into the vote to see if it was motivated by political payback against the councilman proposing the bridge, 7th District Councilman Mark Harder, R-Ballwin.

But in a letter Galloway sent last week to council Chairman Sam Page, D-Creve Coeur, she said that she would not consider the audit unless the council passed a resolution calling for it. The county would pay the cost.

With Page and Stenger absent from last week’s council meeting, another bridge vote and any discussion of the audit was delayed. The council is on recess this week for Memorial Day and next meets June 6.

The bridge first came up for a vote after Harder asked for an investigation into the same council members’ choice of Mark Tucker for county auditor.

County Prosecuting Attorney Robert McCulloch is investigating Tucker’s qualifications for the position under the county Charter, but has not yet released his findings.

“One has nothing to do with the other,” Trakas said of any connection between the Tucker investigation and the bridge vote. “This is about good governance and little else.”

The bridge appeared on the county’s five-year capital plan under the days of former County Executive Charlie Dooley, but the bridge leads to a house and 27-hole golf club owned by Stenger donor Michael Roberts.

Both the Lewis Road Bridge and the Allen Road Bridge cross two train tracks heavily used by Amtrak, coal trains and many of the freight trains heading into or away from St. Louis, Harder said.

Although Trakas acknowledged that the council was not aware of Roberts when it voted April 11, he points to that and other questions surrounding the bridge as to why he voted the way he did.

“Clearly we were not wrong on the bridge vote, and so there’s no political retribution or motivation here,” he said. “This is just a legislative body trying to do its job from a checks and balances standpoint. It’s nothing more complex than that.

“I think you can’t ignore the nexus between campaign contributions and the green lighting of this project.”

But Harder submitted documents to the council last week to clear up “misinformation” about the bridge. The bridge is ranked one of the worst in the state by the Missouri Department of Transportation, or MoDOT, and is the worst bridge currently maintained by the county, Harder wrote.

Those rankings came before Roberts’ donations and have not only been made by the county and state, but regional planning organization East-West Gateway, which decided the Lewis Road Bridge was the region’s top bridge project for matching federal funds.

Of the $2.5 million, $750,000 is slated to come from the federal government, which could move the funds elsewhere if county funding does not come through.

The county has maintained for years that the bridge is owned by Union Pacific Railroad, which has declined to replace it, according to county documents dating from the Dooley era. County officials see the bridge as such a safety issue that they finally decided the county should pay for it. They have a verbal commitment from the railroad to pay 15 percent of the project costs.

Trakas cites the ownership dispute as another reason he balked at replacing the bridge.

“If the county taxpayers don’t have responsibility for that bridge, don’t you think it make sense to investigate whether or not it’s appropriate to spend taxpayer dollars on that bridge?” he said. “I’m not opposed to it, but I want answers to questions.”

Repairs made under the bridge since MoDOT gave it one of the poorest rankings in the state mean the ranking may have improved, Trakas added.

But Harder said anyone who peers under the bridge at those repairs can see they are a “Band-Aid at best” and not enough to shore up the bridge.

“The concrete pillars are crumbling, and what they did is they took steel and sandwiched it together and put bolts through it to give it vertical strength,” Harder said. “So if you go under there, it’s scary.”