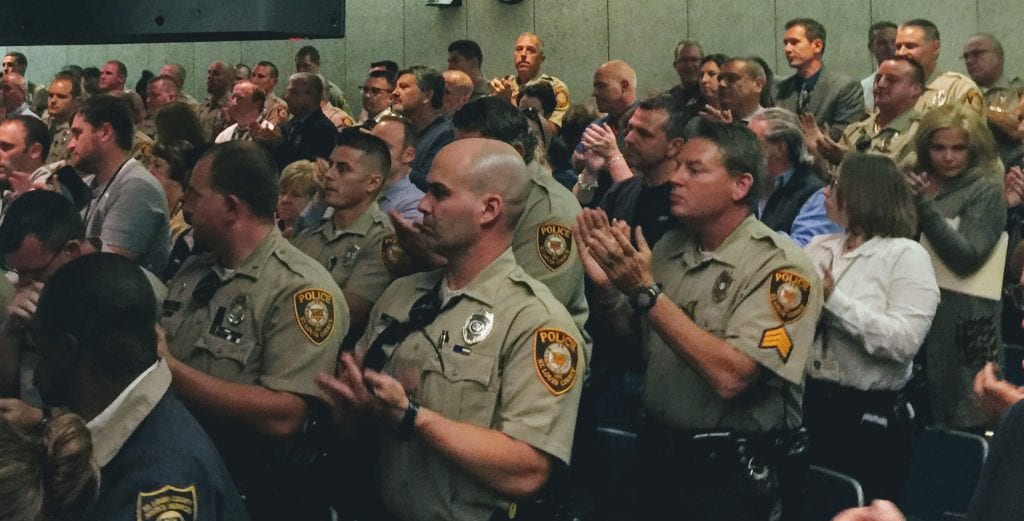 Officers and sergeants from the St. Louis County Police Department applaud as fellow officer and union representative Derek Machens calls for raises at an Oct. 12, 2017, hearing at the County Council.

More than 700 St. Louis County officers will soon get body cameras in a milestone supported by both the St. Louis County Police Department and by the union that represents police officers due to the effect it could have on officer safety and accountability.

To decide on the right company, 40 police officers field-tested the three top cam contenders and decided that Utility had by far the best system, Chief Jon Belmar told the council in a Committee of the Whole hearing June 18 introducing the camera systems. The department will run another pilot for 60 to 90 days to get a handle on using the cameras and see if the department’s proposed policies to govern the cameras need updated.

The Utility system is essentially a smartphone mounted on the officer that can charge as easily as a cell phone between calls and at night, using a regular cell phone charger. It runs on 4G wifi provided by the company. It can either store the videos temporarily or back them up to the cloud when it gets enough bandwidth in between calls to connect to the cloud. The same happens with the dash cam videos.

“It’s uploading all day as I go about my business,” said Lt. Colby Dolly, who runs the department’s Bureau of Research and Analysis and oversaw the department’s pilot testing on body cameras. He presented his findings to the council at the committee hearing.

The company’s storage fees are “impeccable” compared to other companies, and it offers advanced techniques for redaction of videos in case they are requested through the Sunshine Law, Belmar said.

The data is stored in the police car itself through a router in the trunk, which is in a locked box with a key so that the officer can’t tamper with it.

“There’s no way they can do that,” Dolly said of officers tampering with their own video footage, in response to a question from former police chief and 3rd District Councilman Tim Fitch, R-Fenton.

Compared to other companies, SLCPD officials said the Utility system has several advantages.

The bodycams have very accurate GPS tracking, which can assist with policing in several ways. If officers go radio silent, dispatchers can track where they are or if they’re in trouble.

“You’ll know where all your officers are,” said Mark Wood from Utility.

If an officer is shown to be prone on the ground for more than 15 seconds, an “officer down” alert is sent out to dispatchers who can send backup immediately.

“Now, does that save a life? Sometimes we don’t know, we’re in a hypothetical,” Belmar said, adding, “Maybe or maybe not it saves a life, but at some point it answers questions on what is or is not going on at a scene.”

The system automatically detects gunshots, either from the officer’s gun or from someone else’s. When that happens, the camera will automatically turn on and also go back and capture the last two minutes before the shots.

As one example, if dispatchers realize an officer is in an “active shooter” situation, the dispatcher can set up a geofence around a certain officer or location so that every body camera in that geographic area turns on. The department could also immediately know which officers are in that vicinity and contact them. Belmar said he found this one of the most intriguing features of the system.

Through Bluetooth, the system can track any time a gun is taken out of a holster.

The cameras can also connect to the “black box” of each police car, which can record or monitor if an officer hits the brakes or is speeding. Alerts can be set around those features.

In case of an emergency, dispatchers can access an officer’s body camera live to see what is happening. The department won’t turn on that feature as a general policy, but it’s a possibility for the future, Dolly said.

The safety features had officials wondering what difference the new alerts could make in the worst-case scenario. Between the time the council took up the legislation and final passage, North County Police Cooperative Officer Michael Langsdorf was shot and killed responding to a call for a bad check in Wellston.

And council Presiding Officer Ernie Trakas, R-Oakville, said he couldn’t help but wonder how things might have gone differently with the technology that St. Louis County will be getting.

“Had he been wearing a body camera, when he was prone and on the ground struggling with that man, the camera would have sensed that and immediately sent an ‘officer down’ notice to the dispatcher,” Trakas said. “And so help could have been on the way and maybe been there and prevented that tragic death from occurring.”

As for things that can inevitably go wrong with cameras like with all technology, the bodycam can go from zero charge to full in 45 minutes, Wood said. The officer will get an alert when the camera is 30 minutes from fully draining its battery.

To turn off the camera, officers have to hit a button three times, which prevents accidental shutoffs.

Shift supervisors can also remotely monitor each body camera on a shift for accountability.