District officials look to open ECE Annex by next August 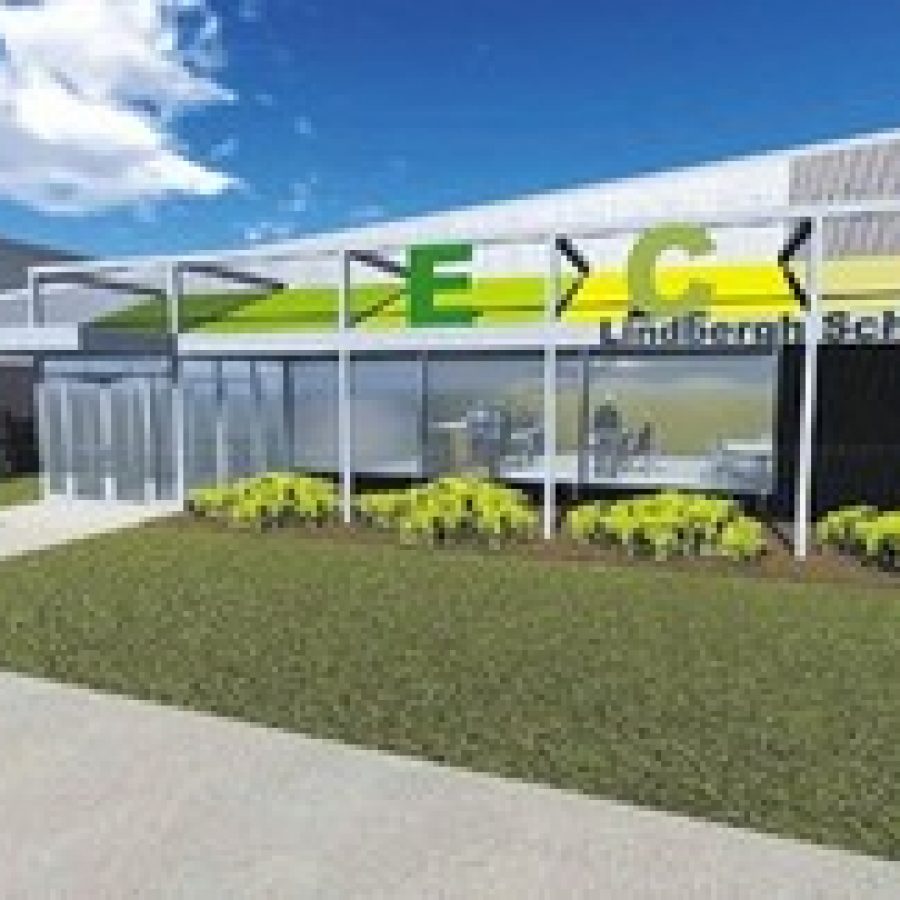 This is a rendering of an Early Childhood Education Annex that Lindbergh Schools officials plan to construct behind Truman Middle School, 12225 Eddie & Park Road.

The Lindbergh Board of Education’s decision to construct an Early Childhood Education Annex was “historic,” according to Superintendent Jim Simpson.

Board members voted 6-0 last week to move forward with the construction of the Early Childhood Education Annex behind Truman Middle School, 12225 Eddie & Park Road. Board Treasurer Kara Gotsch was absent from the Oct. 14 meeting.

During a special meeting Oct. 7, Simpson recommended the construction of the annex to replace classrooms currently housed in Dressel School, which will be demolished next year to make way for a new 650-student elementary building.

Of the board’s decision to construct the ECE Annex, Simpson told the Call, “… Historic — very historic, because anytime you build a building in a school district you can easily see (it last) half a century and most of them go much longer than that. This will also be like that.

“It’s a critical building for us because the thing we must have is more classrooms. We’re finding it very difficult to keep up with the growth curve. Even in what we think are very robust projections of growth, they exceed that every year, and so we are scrambling to make sure we have classrooms for our students …”

For example, the district had an increase of 248 students this September compared to September 2013. District enrollment has increased by 667 students over the past five years.

As proposed, Lindbergh officials hope to open the annex next August.

“We need seven more classrooms and we will use these classrooms to educate young children, early childhood children. It will be very beneficial for their education and for the community, and we’re very excited that we’re able to build this building without costing the taxpayers a penny in taxes — additional taxes,” he said.

“And this building is the only building we can build that has some state funding for it … We’re excited about that. It does have a revenue component to it to offset the cost substantially,” he said.

Revenue from the Department of Ele-mentary and Secondary Education’s Early Childhood Special Education construction fund could range from 25 percent to 40 percent of the cost of the annex.

The 12,800-square-foot, single-story ECE Annex behind Truman — estimated to cost $2.8 million — is a separate expense from the $34 million in Proposition G general-obligation bonds recently issued to pay for the new elementary school.

Besides state funding, Lindbergh will use district reserves to pay for the bulk of the cost of the ECE Annex.

The district’s special-education early childhood classes, along with part-day programs of the Early Childhood Center, are currently located in seven classrooms at Dressel School at 10255 Musick Ave.

Along with seven classrooms to replace the lost ones at Dressel, the ECE Annex will include a large multi-purpose activities room that can serve as a gym for the Lindbergh Athletic Association, or LAA, intramural program and offices, which are also currently housed at Dressel, and for physical education classes at Truman.

All seven classrooms in the annex will include an F-5 tornado shelter, the superintendent said.

“So all our children will be safe. All seven classrooms will have that. It’s a very progressive-looking building,” he said, noting some residents have expressed concerns about how the building will look because it will be a metal building.

“We promise, it will not be ugly. This building will be attractive. Lindbergh prides itself, we don’t build ugly buildings. We go through lots of effort to make sure these buildings are sources of pride for our community, and at the same time, making sure that the dollar value is there …”

The building will have “a wainscot of brick around all four sides,” roughly 4 feet high.

“So it does have masonry on the bottom and that will give it an attractive appearance and also that makes sure nobody runs a lawn tractor into it or dents it in any way. The building will have a 50-year warranty,” Simpson said, adding the most expensive roof that can be put on a building is a metal one.

As for the location of the annex, Simpson said, “… It fits really good on the Truman campus, tucked away in the back corner there …”

A parking lot next to the site is unused during the week, so the facility will have ample parking.

A metal building costs less to construct than an all-masonry building, Simpson said, but it also allows construction to be completed quicker.

“It is a more economical construction. You can do about 30 percent cheaper for the same square footage,” he said. “However, the thing that is really driving us is time. We are really focused on the fact that we need classrooms and we need them now.”

The goal is to have a ribbon-cutting ceremony on Aug. 1.

“… We’re going to do this building in a fast-track way, and we’re able to do that because it is a metal building,” Simpson said. “So we can actually get the building designed by the fabricators before we even go to bid for the general contractor. So we’ll be going out on the fabrication of the building soon ”

The goal is to get the structure “under roof” before the severe winter starts.

“We think we may be able to have this under roof by the first of January or mid-January. Once under roof, then every day’s a work day,” he said.

Lindbergh’s ECE program currently has a waiting list and even with the seven new classrooms, that won’t eliminate the waiting list, Simpson said.

“It will help it, but we can only build what we can build because the cost of this building … is coming not from a bond issue, but is coming out of reserves … We don’t want to draw our reserves down.”

Construction of the ECE Annex will drop those reserves to roughly $20 million, according to the superintendent.

“We have $23 million in reserves right now, and this will take us down to $20 million. We feel comfortable with $20 million in reserves. It’s good to note that if we are going to pay all our bills on time all year long, we must have $15 million in there,” he said. “Otherwise, we have to go to the bank to borrow money some months, and that is not Lindbergh … It’s pretty well written in stone: We’ve never done that and we’re never going to do that.”

Simpson added, “That vote was historic. It may be the first building that Lindbergh has built out of reserves … It’s pretty rare to build out of reserves.”