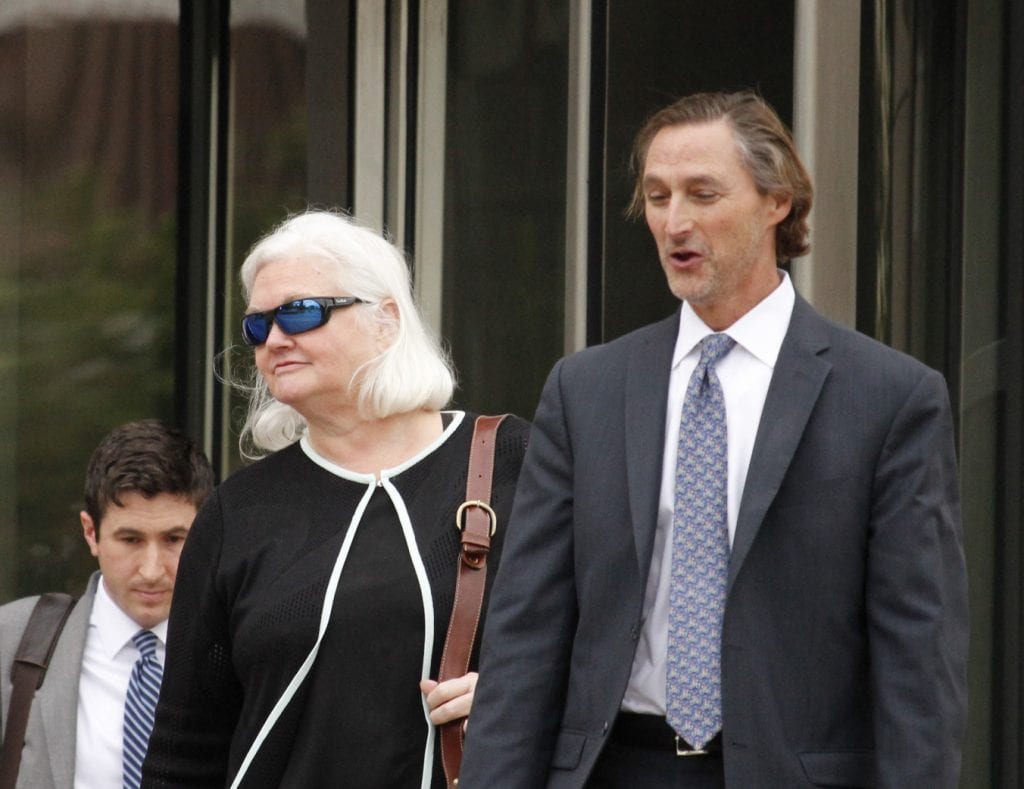 Former St. Louis Economic Development Partnership CEO Sweeney, 61, of Ladue, took a plea deal in a plea hearing at the Thomas F. Eagleton United States Courthouse in downtown St. Louis, telling U.S. District Judge Catherine D. Perry — also Stenger’s judge — that she is guilty of “misprision of a felony,” which is a felony itself and translates, the judge said, to mean that Sweeney both concealed Stenger’s crimes and knew about them and didn’t report them. Stenger pleaded guilty a week ago to bribery, theft of honest services and mail fraud, all felonies.

Sweeney will be sentenced by Perry Aug. 16, a week after Stenger. Under federal sentencing guidelines, Sweeney is listed as either a 9 or a 10, compared to Stenger’s 21. She could get four to 12 months in prison, depending on how prosecutors treat her in a pre-sentencing report. Stenger is facing three to four years in federal prison.

A separate judge held a bond hearing with Sweeney after her guilty plea hearing and released her on her own recognizance, with no bond. She surrendered her passport and, like Stenger, can’t leave the Eastern District of Missouri — including to go to Illinois — without permission.

Surrounded by her three attorneys, Sweeney agreed to take the guilty plea, bypassing the process of a grand jury indicting her as it did Stenger and the businessman he demanded she create contracts for, John Rallo. Rallo is charged with the same three types of fraud as Stenger and pleaded not guilty earlier Friday.

She told the judge she had “extensively” talked with her lawyers about the charge. At one point during a conference Perry held for the attorneys at the bench, she put headphones on as the courtroom was filled with white noise. At Stenger’s arraignment and guilty plea hearing, he went up to the judge’s bench with his attorney Scott Rosenblum.

Stenger recommended Sweeney as head of the Partnership in August  2015, after he took office as county executive in January 2015. She made more than $500,000 a year in the role, also serving as executive director of the St. Louis County Port Authority and as a board member on the Land Clearance Redevelopment Authority.

The Economic Partnership board chairman, Dee Joyner, said, “We looked all over the country and realized the best candidate was right here in St. Louis.”

“Sweeney had knowledge of Stenger’s ongoing bribery scheme, whereby Stenger accepted political donations in exchange for awarding contracts through St. Louis County and the St. Louis Economic Development Partnership and its affiliated organizations,” the U.S. Attorney’s Office said. “Stenger’s scheme deprived the citizens of St. Louis County of their right to the honest services of both Stenger and Sweeney. Knowing of Stenger’s illegal bribery scheme, Sweeney failed to report the criminal conduct to law enforcement.  Sweeney also took steps and engaged in conduct to conceal and cover up Stenger’s illegal bribery scheme which allowed Stenger’s scheme to continue undetected for several years.”

After Goldsmith outlined the evidence that a jury would hear during a trial to Perry, Perry asked Sweeney, “Is everything in this document true?”

Perry said, “Steve Stenger committed honest services, bribery and mail fraud in violation of United States code… You had full knowledge of that fact and you failed to notify authorities and took affirmative steps to conceal his crimes.”

Sweeney faces a maximum penalty of three years in prison and a $250,000 fine.  Restitution is also mandatory.

The Federal Bureau of Investigation and the Postal Inspection Service are investigating this case with the assistance of the Internal Revenue Service Criminal Investigations.