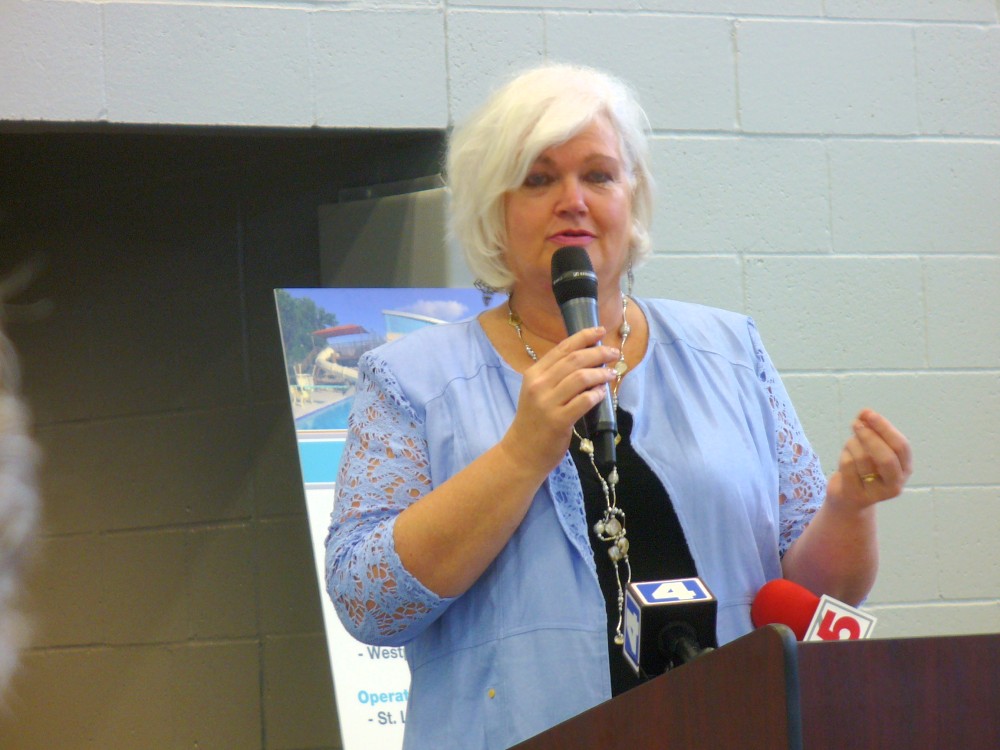 St. Louis Economic Development Partnership CEO Sheila Sweeney speaks at the June 16, 2015 ribbon-cutting ceremony of The Pavilion at Lemay, the recreation center and aquatic center that opened in Lemay with casino money.

Former County Executive Steve Stenger is not the only former county official that will plead guilty in a corruption scandal that has enveloped St. Louis County government.

Federal prosecutors say that former St. Louis Economic Development Partnership CEO Sheila Sweeney, who was forced out by the partnership’s board in January, will plead guilty at 3:30 p.m. Friday in the same courtroom where Stenger did a week earlier, in the courtroom of U.S. District Judge Catherine D. Perry.

Indictments against Sweeney and businessman John Rallo will be unsealed Friday morning, a spokeswoman for the U.S. Attorney’s Office of the Eastern District of Missouri said.

Prosecutors did not say whether Rallo will ultimately plead guilty, or what he is charged with.

Stenger, a Democrat, pleaded guilty last week in a plea deal with a recommended sentence of three to four years for a sweeping corruption scheme that permeated county government, as he commanded department heads and the head of the city-county joint economic development agency to steer county contracts to his campaign donors so that he could stay in power.

The county executive, 47, resigned minutes after an indictment a federal grand jury handed down April 25 was unsealed Monday morning, April 29. He pleaded not guilty at his arraignment later that day, while agreeing to voluntarily give up his law license.

Assistant U.S. Attorney Hal Goldsmith said that the yearlong investigation was kept undercover to not interfere with either of Stenger’s elections last year. Rallo and Sweeney both appeared to cooperate in the investigation against Stenger, with conversations and text messages with them appearing in the indictment.

Prosecutors accuse Stenger of five schemes violating the public trust, all centering around Sweeney and her roles as CEO of the Economic Development Partnership, executive director of the Port Authority and board member of the Land Clearance Redevelopment Authority. Four of the schemes revolve around businessman John Rallo, who over four years repeatedly pestered Stenger to give him county contracts in exchange for Rallo’s $10,000 a year in campaign donations. Overall, Stenger amassed more than $4 million in his campaign account for county executive for last year’s races against Democrat Mark Mantovani, then Republican Paul Berry III.