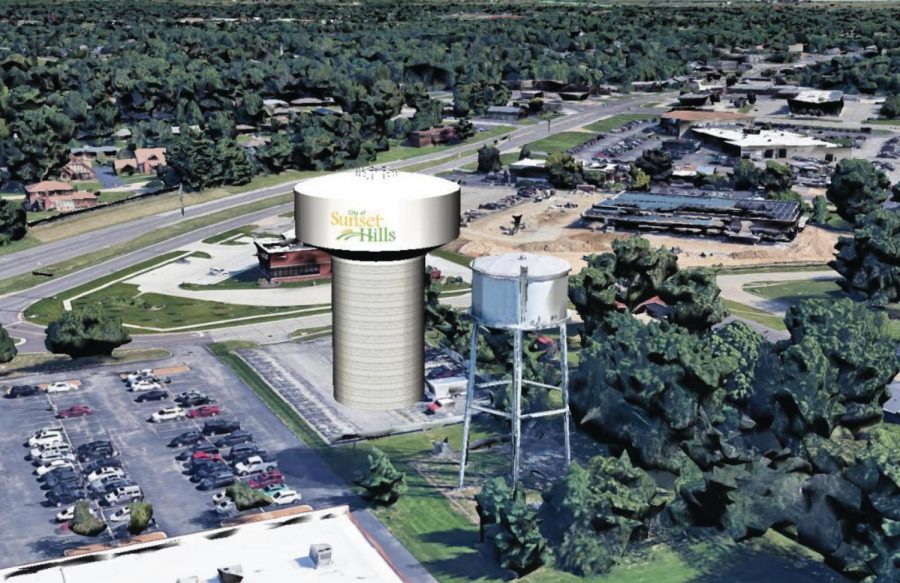 The proposed new larger water tower is shown in this rendering from Missouri American Water. The new tower with the city logo, left, is shown next to the existing smaller tower. The new tower will be 105 feet tall with an 82-foot diameter and hold 1.5 million gallons, compared to the current tower at 95 feet with a 60-foot diameter that holds 250,000 gallons. The parking lot shown to the left is for the Sunset Center shopping plaza, where Gallery of Beauty is located along Gravois Road.

The Sunset Hills Board of Aldermen voted to deny Missouri American Water an anticipated permit for a water tower for failing to meet setback requirements at its June 22 special meeting.

Lieber said the tower, located at 11382 Sappington Barracks Road, is unsafe, and the aldermen haven’t been kept in the loop about the tower plans. The aldermen have a seven day limit to discuss and halt permits after they are filed, so discussion before it is filed may have been necessary due to potential scheduling concerns.

“I would like to make sure our residents are protected, and I feel like there may be some safety issues,” Lieber said. “After listening to the meeting that was held between our mayor, our city administrator and Missouri American Water that jeopardized the safety of our residents.”

City Attorney Robert Jones said he received a call earlier that day from Missouri American’s lawyer, John Young, who anticipated a motion would be made at the meeting.

“Mr. Young basically said such a motion is improper because it isn’t on the agenda, it violates the Sunshine Law and the Board of Aldermen does not have the authority to direct staff to deny the permit, besides no permit has yet been applied for, and Missouri American will sue … to make sure their rights are protected,” Jones said.

Jones said in order to apply setbacks described in public comment, the tower would have to be considered a building and in his opinion it is not one, it is a “structure not subject to those particular setbacks.” He said he has lost a similar case before where the court found the city could not enforce certain rules on an emergency communications tower, because Sunset Hills is considered a fourth class city.

Friedmann, who made the motion originally, argued the water tower is a building.

“It has a roof, it has walls, it’s intended to shelter,” Friedmann said. “I don’t see which element of a building we are missing.”

She said brochures provided by Missouri American in the past describe how things can be housed within the column of the tower, and “housing something is sheltering it.” Jones said if a water tower is a building, then all other structures would be buildings as well.

According to Jones, Missouri American has approached the city in the past purely to let it have input on projects, as they arguably don’t need the city’s approval. The vote on the Conditional Use Permit in January was a result of voluntary participation from Missouri American, and Mayor Pat Fribis said she voted to approve the permit to avoid a lawsuit.

“We certainly want to keep our residents as safe and happy as possible and Missouri American has been working with them the way I see it,” Fribis said.

“I have heard the description of Missouri American numerous times as a good neighbor … I’m not saying I don’t believe that, but when I was in business my actions dictated my reputation,” Daues said. “Putting this tower where they are and not even considering going with a low, underground facility … to me is not an indication of a good neighbor. To me, when we have this discussion and we’re being told if we vote the wrong way we’ll be sued, is not an indication of a good neighbor.”

Daues said he can’t think of a better way to spend city money than public safety, and if the tower is indeed unsafe it should be looked at again.