Schlink sworn in as Crestwood mayor

Duncan elected unanimously to serve as board president. 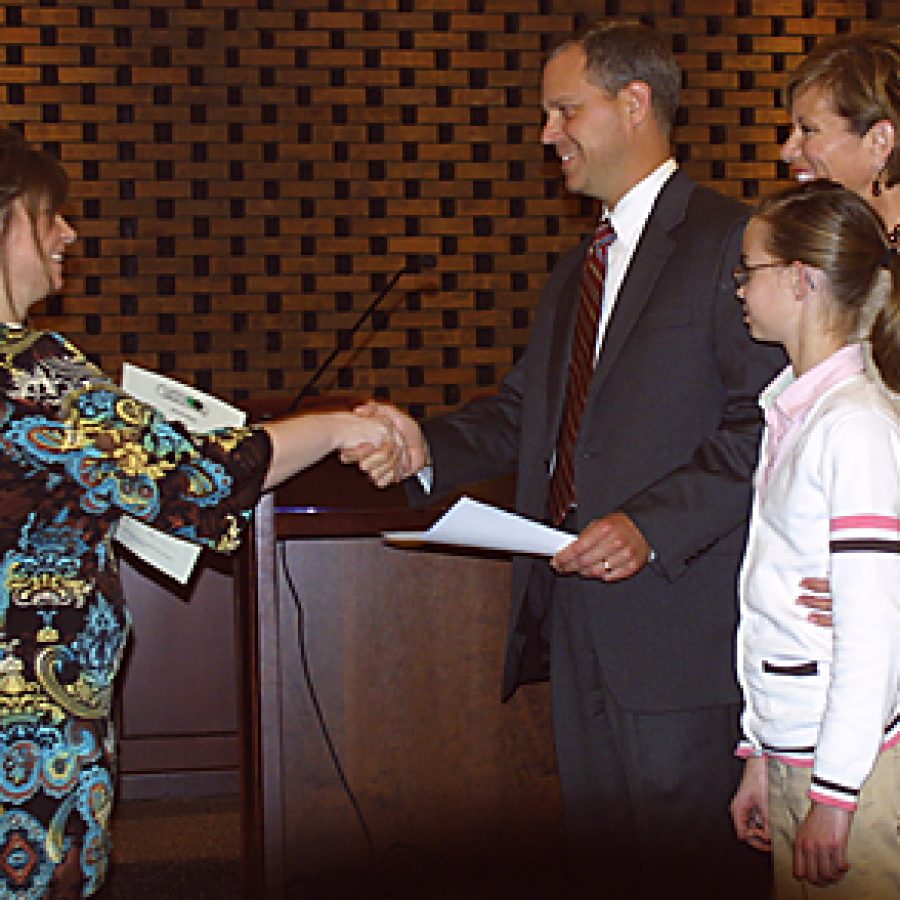 Before his tenure as Crestwood’s mayor officially came to an end last week, Roy Robinson wished his successor the best and said he was “honored” to lead the city for six years.

Jeff Schlink assumed the mayoral post at the April 26 Board of Aldermen meeting, taking the oath of office with his wife, Kim, and daughter Maggie by his side.

Voters on April 5 overwhelmingly elected the former Ward 2 alderman to a three-year term as mayor over Robinson, who was first elected to the post in 2005 and was unopposed for a second term in 2008.

Election data from the county show that Schlink carried all six city polling places. Of the 9,270 registered voters in Crestwood, 2,844 cast ballots in the election, putting turnout at 30.7 percent.

Shortly before Schlink was sworn in last week, Robinson encouraged the incoming mayor to “take good care of this city as we all need your help now.”

“It’s not going to be an easy task,” he said, “but I’ve asked not only the employees but the people of the community to get behind you and help you as much as we can to make sure you’re successful. Because if you’re successful, we’re all successful.”

Robinson added, “We’ve had a few little talks. Jeff’s a fine man and I just hope he has a great amount of success in keeping our city going.”

As for his own time in office, the outgoing mayor said, “I’m honored to have served this community the last six years.

“There are some that say I haven’t done anything but I just want to take objection to that because over the past six years we’ve come a long way in this city even with the economic situation that we’ve been involved in.”

He thanked the Board of Aldermen and “our fine city employees for all the work they’ve done to make this a better city.”

“Thank you everyone for everything,” said Robinson, to whom Schlink later presented a resolution recognizing his service to Crestwood. “I appreciate it.”

Duncan replaces fellow Ward 1 Alderman Darryl Wallach as president of the Board of Aldermen.

The board tied 4-4 on the vote with the nominees voting for themselves; Beezley, Foote and Ward 2 Alderman Chris Pickel voting for Duncan; and Schlink, Duchild and Miguel voting for Wallach.

Robinson declined to break the tie and the matter was postponed until the following board meeting, where Duncan withdrew her name.