‘Route for the Brave’ stops at Lemay VFW 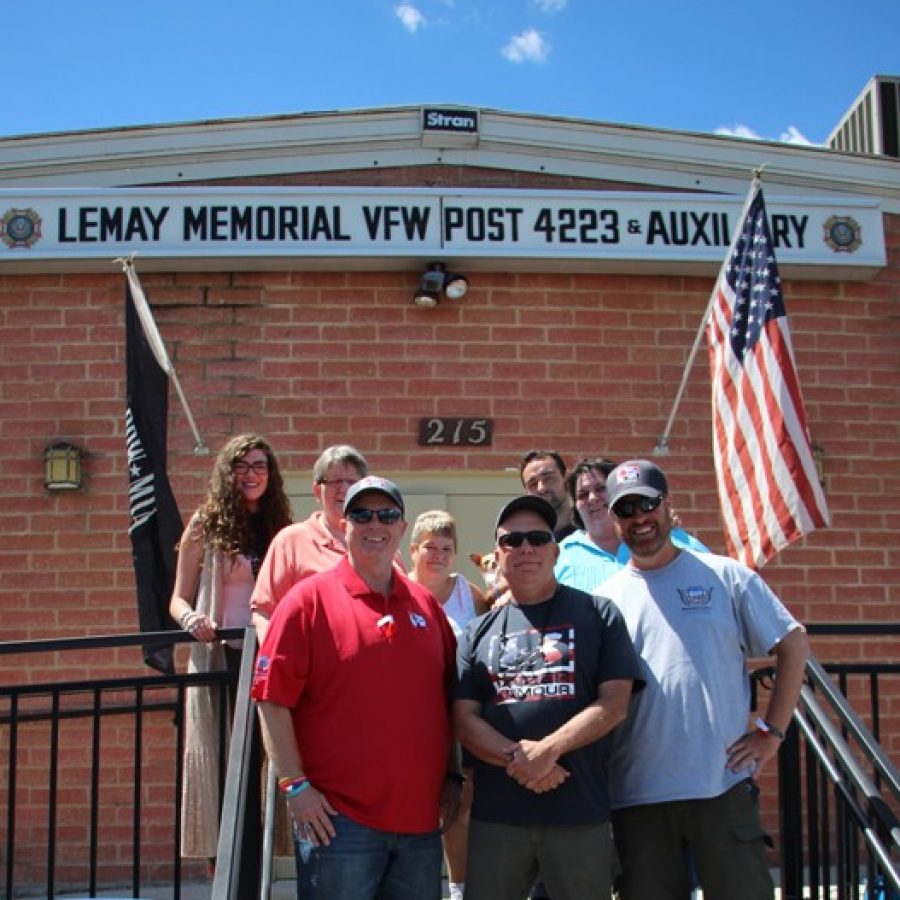 Cross-country walkers from Helping Hands for Freedom with representatives of Lemay VFW Post 4223 last week. Front, left to right, are Helping Hands CEO Darin Fishburn and walkers Kevin Winton and David Roth. In the back are representatives of the Lemay VFW including Ladies' Auxiliary President Jane Marshall and Jr. Vice and Manager Pam Jo Pinkley.

A teacher and a police officer walking across the country to raise money for veterans visited Lemay last week as they neared the midpoint of the 3,092-mile, five-month “Route for the Brave.”

They are walking west, 30 miles every day except Sundays, until they reach San Francisco Aug. 26.

Roth, chairman of the nonprofit’s board, hopes to raise $3 million to open a 46-acre “house of healing” with psychiatrists on staff, horse therapy and dog therapy for families who have lost members to war and treatment for veterans with post-traumatic stress disorder, or PTSD.

Named a Military Charity of the Year last year, Helping Hands for Freedom’s primary mission is emergency assistance for fallen soldiers’ families, but the PTSD problem has become too large to ignore.

“We’re losing 22 soldiers a day on U.S. soil due to suicide — that’s basically one in every state every other day,” said Helping Hands CEO Darin Fishburn, who is trailing the two walkers with supplies in an RV and missed the birth of his first child to join the walk. “We’re trying to get them a home, so that’s the sole purpose of why we walk …

“They’re not walking just to walk. They’re walking for a cause and a purpose. They’re complete volunteers, and we’re not spring chickens, you know what I mean — the average age on this trip is 48.”

As Route for the Brave heads toward California along Route 40, Veterans of Foreign Wars outposts across the country are contributing with food, donations and places to stay, and Lemay VFW Post 4223, 215 Military Road, did its part by serving the group lunch June 7.

Lemay VFW Manager Pam Jo Pinkley warned the group that the Lemay VFW post is not a wealthy one but still manages to contribute all that it can to the community through clothing drives and dinners for homeless veterans — activities that don’t require a lot of money but take time, effort and dedicated volunteers.

“I don’t have cash to give them, but I can give all the heart I got, and that’s about the best this VFW can do. It’s about heart, and it’s about veterans,” Pinkley told the Call.

The group could have easily chosen to go to larger VFW halls around the region as they stopped in St. Louis, but they were so impressed by how much Lemay gets done with what it has that they chose to come to Lemay, she added.

Pinkley made sure to let the group know about Lemay’s own fallen soldier, Army Sgt. Amanda Pinson, who worked for the National Security Agency and was killed in Iraq in 2006. The Grasso Plaza post office in Affton was named after Pinson last month.

PTSD is a daily struggle for many veterans in Lemay, Pinkley said, and the VFW does all it can to help them, feeding them and giving them a place to stay until they can get back on their feet. Many veterans hide their symptoms, while others are suffering so much that they can’t.

Braving wind, rain and blood blisters — and sometimes all three at the same time, as when they crossed a bridge into downtown St. Louis — the military families they are meeting along the way are motivating the two to keep walking no matter what happens.

“We’re just going to try to make a difference one step at a time,” Roth told the Call in Lemay. “We’re going to move forward, we’re going to get to San Francisco on Aug. 26 and we’re going to build this house of healing.”

The group has raised 10 percent to 15 percent of what it needs to build the PTSD center. Other than donating, Fishburn said the easiest way for people to contribute is to like Route for the Brave on Facebook and share the page, because several companies have pledged money if the group meets thresholds of Facebook likes.