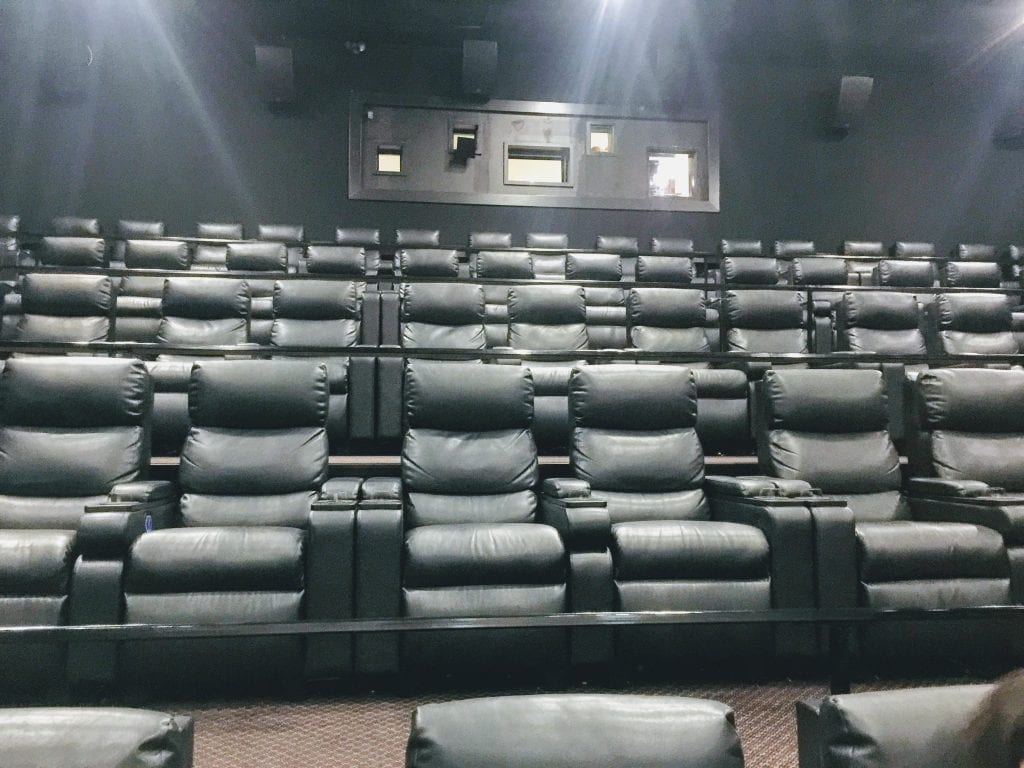 Marcus Wehrenberg Theatres officially unveils its renovations to Ronnie’s 20 Cine today, showcasing the south county movie theater as the first of the former Wehrenberg cinemas in St. Louis to be remodeled.

Milwaukee, Wis.-based Marcus announced the renovations after buying the 14 local theaters of St. Louis-based Wehrenberg last year. As part of the renovations, Ronnie’s will be hiring 70 more employees, part of 200 jobs added in the St. Louis region from the updated movie theaters.

The new Ronnie’s will be the “best place to see a movie in St. Louis,” Marcus District Director Brian Shander promised at a preview Wednesday.

Moviegoers walking into south county’s largest theater for tonight’s premiere of “Thor: Ragnarok” will get the first glimpse of the changes in store for the rest of Marcus Wehrenberg’s St. Louis regional theaters, from Chesterfield to O’Fallon, Ill., to Cape Girardeau.

They will see a newly carpeted lobby and new snack areas, restaurants and a full-scale bar with large screens, Take Five, that Marcus hopes will become a sports-viewing destination. Drinks will be themed around movies, such as the currently available “Bad Moms Mojito.”

Drinks can also be ordered from the theater and brought to moviegoers. The bar has huge televisions that are larger than most sports bars in St. Louis, Shander noted.

But the biggest change to the moviegoing experience itself will be the seats, which have been replaced with recliners in 19 of the 20 theaters — every theater except the IMAX theater, which is governed by a contract that, for now at least, prevents such renovations. It’s not unheard of for people to bring in blankets and pillows, Shander said.

The upscale Superscreen DLX has more expensive tickets, but in return guests get heated recliners and an upgraded Dolby Atmos sound system with speakers on the ceiling and walls that transmit more of an immersive, surround-sound experience.

“So let’s say you’re watching a movie, a war movie with a helicopter sound,” Shanders said. “As that helicopter appears on screen, you’ll actually hear it come from the backside of the theater before it actually arrives onscreen in the image. So it’s a really, really unique way of seeing movies.”

Although tickets may be more expensive than they were in the past, Marcus has a tradition of $5 Tuesdays when any customer can see any movie, including in the DLX theater, for a low price, along with senior-citizen and early bird specials.

Online reservations for blockbusters like “Thor: Ragnarok” could signal the end of the days of waiting in line to see a movie on the first night it opens, since anyone can use a computer or the Marcus mobile app to see what seats are already taken or buy their own. Rewards members have the Fandango fee waived.

Other immediately noticeable changes include concessions, where customers will get their own drinks. That should speed up the lines for snacks, Shander said. And customers waiting in those lines will wait between aisles stocked with candy that are more reminiscent of Wal-Mart than a typical movie theater. Since they can select their own snacks, those lines should also speed up.

Marcus is also attempting to change the traditional “dinner and a movie” night out to dinner and a movie under one roof at Ronnie’s. To that end, Marcus is opening two restaurants with food freshly made on site, Reel Sizzle and Zaffiro’s Express. Reel Sizzle is a nod to a 1950s-style diner with burgers, fries and milkshakes, and Zaffiro’s Express is a spinoff of Zaffiro’s Pizza in Milwaukee.

“The Zeffiro’s brand is pretty well known in Milwaukee, and it is actually a top 100 pizza place in the U.S.,” Shander said. “It started as a mom and pop. It’s got a real famous thin crust that’s cracker-thin — when you bite it, it’s crisp like a cracker. It’s perfect for eating inside a movie theater.”

To adapt the Milwaukee menu to St. Louis tastes, Zaffiro’s added toasted ravioli to its menu. The pizza itself has a cracker-like thin crust and mozzarella cheese. It remains to be seen whether Zaffiro’s would add Provel to its pizza options, which include the “EBF” pizza or “Everything But Fish” and more traditional choices like veggie and pepperoni. The restaurant also has wraps for a healthier option.

All food will be made fresh on site, which is where the extra workers are involved.

“Everything is prepared to order, everything is done right here in-house,” Shander said. “You place the order, the cooks will start preparing the food for you.”

Restaurant patrons will get a pager after they order which will let them know when their food is ready, and they can eat at new tables installed around the mock drive-in area of Ronnie’s lobby, in the bar or in the theaters.

In a nod to the unique past of Ronnie’s as a drive-in theater in south county, the renovations keep the classic pink and blue cars that have been in the lobby at Ronnie’s for decades. The speakers on the cars are from the then-Ronnie’s Drive-In.

“I think they have a long legacy of a St. Louis tradition, and we’re very respectful of that,” Shander said of Wehrenberg. “Even with this as we remodel it, we know that the drive-in had a big impact on the guests here, and we wanted to be able to retain some of that while still creating something different.”