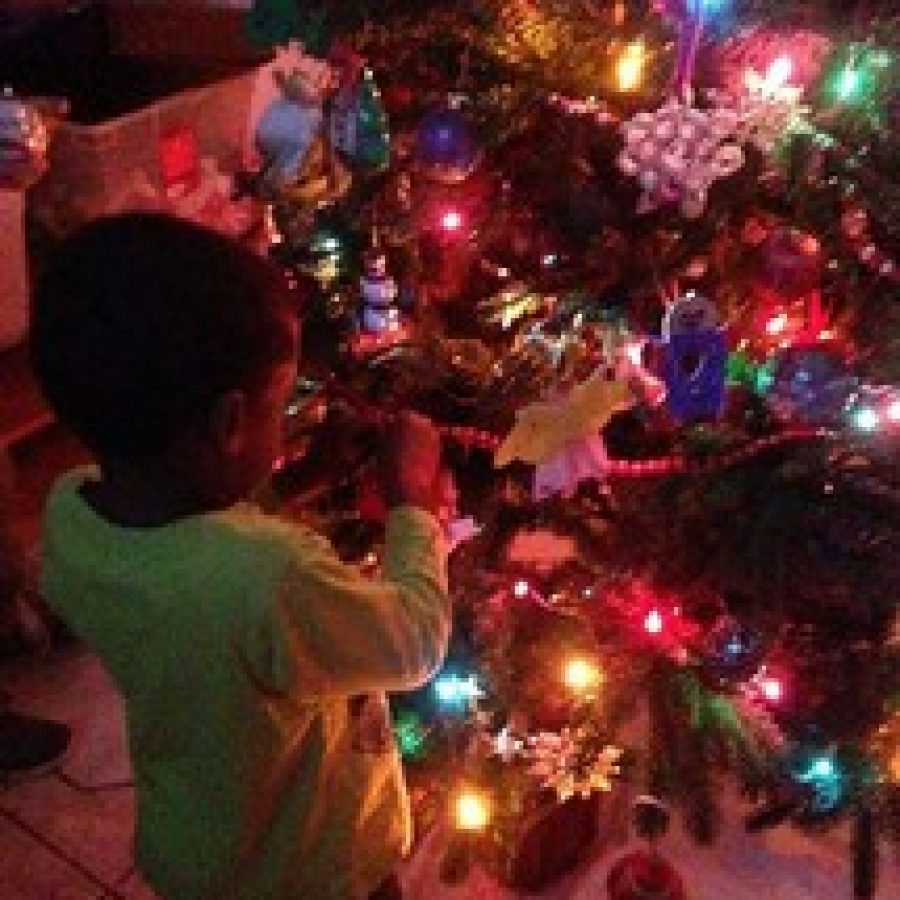 Christmas will be a little brighter this year for a south county foster family who had their home decorated inside and out for the holidays by River City Casino employees.

For the past 11 years, Becky and Jesse Hughes have lived in the Angels’ Arms foster house on Tesson Ferry Road, across from Sperreng Middle School, where they have hosted a varying number of foster children. Angels’ Arms had been based in Lafayette Square but moved its headquarters to south county in April, when the nonprofit organization built its offices onto the Hughes house.

The Christmas decorations on the house this year, however, are the envy of the other Angels’ Arms houses around the county. The Christmas decorations were a surprise for the foster children, who returned home from school to find a blow-up Santa and snowman on the front lawn, blue icicles lining the roof of the two-story house and a perfectly decorated tree taking up the entire front foyer, in front of pictures that hang on the wall depicting the many foster children the Hughes family has hosted throughout the years – more than 100.

“When the kids come in, it’s just going to knock them off their seats,” Becky Hughes said. “I think they’ve done a beautiful job.”

Angels’ Arms has operated for 15 years and has houses throughout the St. Louis region. The organization will open its 11th house in 2015, a house in Ballwin that was completely donated to the group. A second south county home opened in 2012, operated by foster mother Barb Bocklage.

Just days after the River City employees decked out the Angels’ Arms house, the Hughes family welcomed more foster children to the house, three siblings. Angels’ Arms specializes in keeping sibling groups together rather than splitting them up.

River City Casino Assistant General Manager Steve Peate helped come up with the idea for the event, since he recently joined the board of directors of Angels’ Arms.

However, taking time out to decorate a house for a foster family is just part of a long line of nonprofit giving by the employees of River City Casino, its sister casino in St. Charles, Ameristar, and its parent company, Pinnacle Entertainment, said River City Vice President and General Manager Chris Plant.

Monthly, Pinnacle honors an employee from the casinos’ “heart-of-house” — the back of the house — who has volunteered and contributed to local communities, with one employee honored with the Care Award at the end of each year for his or her giving.

At that time, Ameristar was involved with Angels’ Arms, but due to the proximity of River City Casino in Lemay to the Angels’ Arms offices and south county foster houses, it just makes sense for River City employees to help out how they can with the organization, while employees in St. Charles focus on organizations based more in St. Charles and west county, Plant said.

“When you blend it all together, the footprint of giving is pretty expansive,” he said. “The main ingredient is this really comes from the heart of our team members.”

Since River City is in Lemay, employees are also very involved with another Lemay-based organization, Feed My People, and Plant serves on the Feed My People board.