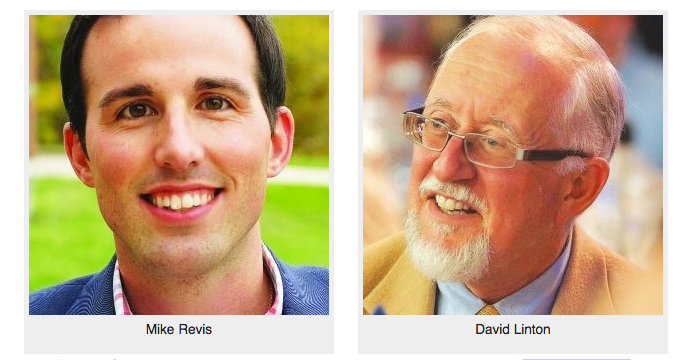 Democrat Mike Revis of Fenton is the apparent winner of today’s special election to fill the 97th Missouri House District seat, according to unofficial results.
Revis received 1,787 votes — 51.558 percent — while Republican David Linton of Fenton garnered 1,679 votes — 48.442 percent.
Revis will replace Rep. John McCaherty, R-Fenton, who resigned Sept. 16 to focus on his campaign for county executive in Jefferson County. McCaherty since has decided not to seek the county executive position.
The House district is mostly in Jefferson County, but includes some areas of Concord in south county around Meramec Bottom Road and Hagemann Elementary.

Below is the Call’s previous story about the special election:

Residents of south county and Jefferson County in the 97th Missouri House District who have gone unrepresented since September will elect a new state legislator in a special election next week.
Republican David Linton and Democrat Mike Revis, both of Fenton, were selected by their parties to compete in the Feb. 6 election.
They are vying to replace Rep. John McCaherty, R-Fenton, who resigned Sept. 16 to focus on his campaign for county executive in Jefferson County. McCaherty since has decided not to seek the county executive position.
The House district is mostly in Jefferson County, but includes some areas of Concord in south county around Meramec Bottom Road and Hagemann Elementary.
Asked to identify the most important issue in the race, Linton declined to respond to a Call questionnaire.
Revis said, “As the son, grandson, godson, cousin, nephew and neighbor to someone who belongs to organized labor, my biggest issue in this race is defending working people and opposing anti-worker legislation, such as right to work. I’ve seen firsthand the benefits of growing up in a union home. It’s time more elected officials stand up for the middle and working class and not just support tax cuts for the rich.”
Linton is an attorney. He and his wife, Judy, have three daughters and grandchildren. His father, former Rep. William “Bill” Linton, served 16 years in the Missouri House representing a district around Wildwood before term limits were imposed.
Revis, 22 Circle Drive, Fenton, is a purchasing manager at Anheuser-Busch InBev.
The first-time candidate said he is seeking office because “too often we see politicians who are only concerned with their own self-benefit. I’m tired of seeing Missouri sold out to out-of-state special interests. I have deep roots in this area and want to fight for the other hard-working Missouri families that call District 97 home.”
Revis gave the following responses to a Call questionnaire:
What is your position on abortion?
Revis said, “In this special election we have two male candidates. It’s difficult to have this discussion between two male candidates when neither of us know the fear of carrying a child unexpectedly. As a Catholic, I am not a proponent of abortion and would align with being pro-life. Through members of my family I have seen the joys and blessing of adoption. There are circumstances though where I feel it is appropriate, such as when the mother’s life is in danger or if the mother is a victim of sexual assault.
“That said, I still believe that Planned Parenthood provides a variety of beneficial and lifesaving services for our communities — especially as access to affordable health care becomes more and more difficult. To say you are pro-life cannot only mean you are pro-birth. If Missouri decides to limit abortions, then there must be means to provide care for the mothers in need who would otherwise seek to terminate their pregnancy. Then once the child is born, there must be care available for that child. We can’t continue to avoid helpful preventative measures such as sex education and birth control.”
What is your position on the death penalty?
Revis said, “If there is absolute proof and the crime is deserving, I am in support of the court’s decision on the death penalty.”
Would you support amending the state’s Sunshine Law to require public governmental bodies to make audio recordings of all closed meetings?
Revis said, “Yes, if you are a public official, then your boss is your constituents. These laws support accountability of our elected officials.”
In light of recent events, do you believe Gov. Eric Greitens should resign?
Revis said, “It’s troubling to me that too many elected officials feel that their title and position allow them to ignore morality. This is not unique to one party — candidates in both have committed unacceptable acts. It especially concerns me when as a society the first reaction of many is to ignore allegations of members of our own party and point fingers at opposition who have committed similar acts.
“When are we going to stand up and say enough is enough and hold our elected officials accountable? If the allegations are found true, the governor needs to be held accountable and would not be a proper role model to lead our state in Jefferson City.”
Would you support legislation imposing limits on campaign contributions?
Revis said, “Yes. This helps us to fight dark and out-of-state money. Campaigns should not be singlehandedly funded by large contributions from the rich.”
If elected, what bill would you sponsor as your first legislation?
Revis said, “If elected, my first priority is to be a voice for the middle and working class, and I plan to do so by defending labor, supporting public education, advocating for affordable health care and standing with our first responders and armed forces.
“There are many other issues that people in our community are passionate about, which is why I am committed to being actively involved in the district. Elected officials are not only the voice of their party, they are the voice of the entire community in which they represent. By allowing myself to explore the point and counterpoint of each concern, I can provide a truer representation of the ideals of the entire district.”

Other issues you perceive in the race and why?

In addition to labor, I come from a family with many educators and am passionate about supporting our public education system so that our students and teachers have the resources they need to be successful. I also want to make sure that our seniors and those in need have access to healthcare. We must also do more to support our first responders and armed forces to thank them for their sacrifice and commitment to keeping us safe.

I support community centered development. Tax incentive policies should be used to bring businesses and improvements that the people living in the community want to see. They should also only be used in cases where areas are blighted and in need of incentives, and that when we over use TIF and other development incentives we take away from the tax base and harm public education. This policy should be used to improve communities and not just make money for developers.

Would you support placing a constitutional amendment before voters that, if approved, would repeal the supermajority requirement for school district bond issues?

Putting this before voters would allow the people to make this decision. Personally, I would be supportive of a simple majority for school district bond issues. Schools do not take the decision lightly to bring forward a bond proposal initiative, and it is an investment in our children.

We must be committed to fully funding our public education system. Robbing Peter to pay Paul doesn’t work when it comes to education. We need to ensure that funds are available because not every district has a tax base that can support itself, especially our rural schools. Its not about funding the formula, its about funding our schools.

As a gun owner, NRA member and someone who supports gun ownership, there is still room for improvement with our gun laws to ensure safety for all citizens. The vast majority of gun owners are responsible and safe, but that doesn’t mean we cant pass legislation that increases safety while still supporting the second amendment.

Are changes needed to the state’s current Open Meetings and Record Law? If so, what would you propose?

The policy is there, now it comes down to enforcement and accountability. It is important that we continue to allow the public access to information regarding government body meetings and decisions.

As the crossroads of our nation, there is a strong need to improve our heavily trafficked roads and bridges. This is not something that should be resolved with new taxes or tolls. The solution is to identify wasteful spending in the budget and shift the importance of improving our infrastructure. This creates jobs and will help to attract new business.

Eminent domain is a tool that can be used appropriately for area improvements. It should not be used to forcibly remove people from their homes when the project does not provide community improvements and benefits. In Jefferson County, its not unheard of to see a home become vacant and fall into neglect. This can cause a safety concern and is detrimental to those in the area. In that case it can be used as a valuable tool.

As a resident of Jefferson County, in my view this is a decision that would need to be made by the citizens of St. Louis city and County. There is potential for economic synergies, if done properly, which could then free up resources and reduce the tax burden on citizens. Ultimately, this is a decision to be made by the citizens of both communities and not Jefferson City.

Are changes needed to the Public School and Education Employee Retirement Systems of Missouri? If so, what would you propose?

Like right to work, this is another attack on the middle and working class. Government should not be accessing or meddling with teacher pensions. Missouri is fortunate to have a strong, well funded, retirement plan for its teachers.

Are changes needed to the existing law regarding student transfers? If so, what would you propose?

Parents and students should have the option to make in district transfers as long as financial burden is not imposed on the original school. We cannot punish and rob underperforming schools by withholding and diverting financial resources. Often school choice proposals include the option to divert funds for public education to private schools. This is not something I support.

Are changes needed at the state level to make elections smoother in St. Louis County? If so, what would you propose?

Yes, there is room for better education, especially after the recent passing of Amendment 6 and the new voter ID law so that voters are prepared as they arrive at the polls. We need to promote engagement efforts and outreach to encourage people to vote.