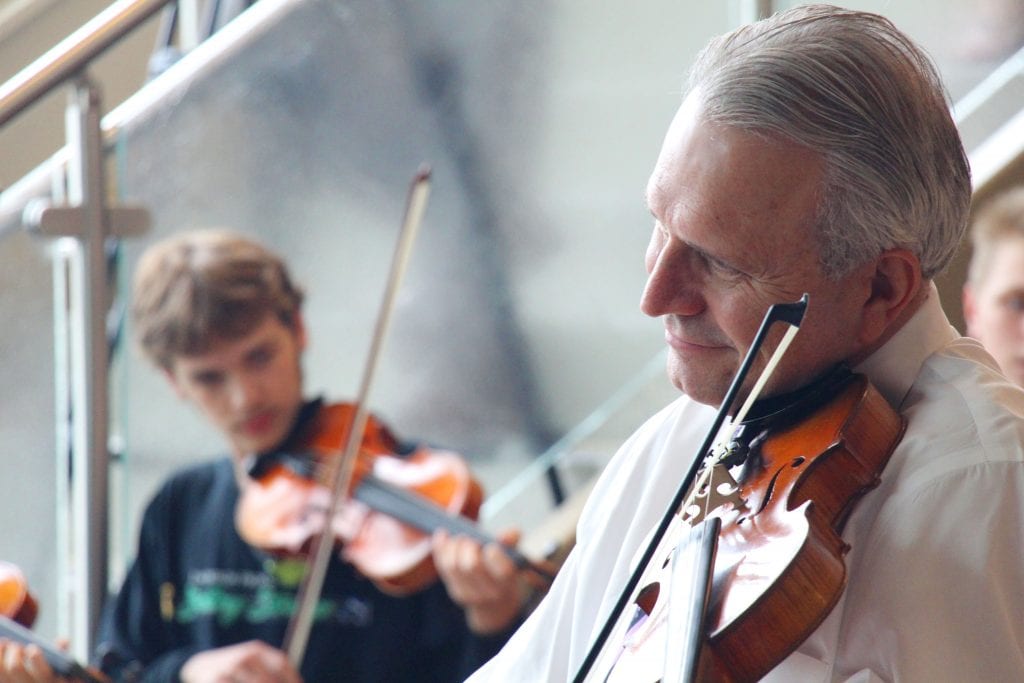 Retiring Lindbergh superintendent Jim Simpson, who plays fiddle in a band on weekends, performs with the Lindbergh Strolling Strings at his retirement open house May 17, above.

More than 10 years ago, Lindbergh Superintendent Jim Simpson was sitting on his deck in Joplin, where he had served as superintendent for seven years, and told his wife, Carol Ann: “There’s one district that I’ve had my eye on that’s an outstanding district that really would fulfill my career if I could ever have the honor to be their superintendent. And that’s Lindbergh.”

The rest is history. Simpson officially retires as superintendent of Lindbergh Schools June 30 after what the district is calling a “decade of distinction.” During Simpson’s tenure, the district ranked as the top academic district in Missouri for five years in a row and still ranks in the top five alongside schools with twice the cost per student.

Tennessee native Simpson, who is only the fifth superintendent in Lindbergh history, had an unusual path to his 23-year career in education. He started as a geologist, but had to find a new career path when the lead mines closed down.

In that moment, he realized the importance of education. Because of the many math classes he’d taken, he was able to pivot and take a job as a math teacher. But that decision came only after many “long, soulful walks” with Carol Ann pondering  their future.

Looking back, education turned out pretty well for Simpson, who is only the fifth superintendent in Lindbergh history.

“I’m really feeling good about my career,” Simpson said. “I started administration in a district that was really just a farm crossroads in the southeast Bootheel, and now I’m finishing it at the No. 1 school district in the state.”

Simpson was honored for those achievements with resolutions presented at his last Board of Education meeting June 12 from the Missouri House and Senate. County Executive Steve Stenger declared the day “Dr. Jim Simpson Day” in St. Louis County.

For those who lose sight of Lindbergh’s accomplishments, Stenger’s education liaison Barbara Fraser told the board that she sees the annual progress reports from every school district in the county, and Lindbergh’s always stands out.

Simpson inherited high academics from his predecessor Jim Sandfort, but he said he “notched it up a level, and that sent us into the stratosphere.” And since Simpson considers high academics his passion, he sees that as his greatest accomplishment.

“There’s 523 districts in the state of Missouri, and having higher academic achievement than all those is quite amazing,” he said.  “Ultimately, students’ futures depend on it, how well they do in life and the opportunities they have. So it’s almost to me a holy mission. Everywhere I’ve been academics has been my focus, but only in Lindbergh does it reach the zenith of being No. 1 in the state.”

Simpson always had to forecast what he calls “chess moves” years in advance to ensure that there would be enough schools and classrooms for babies born today who are entering a kindergarten classroom in five years. The planning for Dressel Elementary started five years before the ribbon-cutting. Many superintendents never build new schools, but Lindbergh was under construction from Simpson’s first day in the district to nearly his last.

“If we were to drive around and go back in a time machine 10 years ago, it would be a wholly different district,” Simpson said. “We’ve transformed the district.”

Under his watch, the district built its sixth elementary school, Dressel, and Concord Elementary,  two early-childhood education centers and a new Central Office, along with adding wings to every other elementary school, renovating the middle schools and adding a new high-school cafeteria, 14 extra classrooms and gym.

He also pointed to signs of progress less visible on the outside, like bringing technology into 350 classrooms. Under his watch, Lindbergh converted every classroom from chalkboards to Smartboards and trained 450 teachers how to use them.

“That’s part of being No. 1,” Simpson said. “There’s a lot of reasons, but transforming ourselves and using the power of the digital side gained us academics.”

Like Simpson did at Joplin, he dropped the outdated “R-7” and changed the name from Lindbergh School District to Lindbergh Schools. The district intentionally rebranded every school with a single “Flyers” mascot and Arch and plane logo.

“It really created this ‘Lindbergh’ community, rather than Fenton and Crestwood and Sunset Hills,” Communications Director Beth Johnston said.

Simpson is also proud of steering the district through the Great Recession. He delivered a balanced budget every year and increased academics despite losing $14 million in revenue in a single year and making $6.7 million in budget cuts.

Despite protests led by the Lindbergh National Education Association that culminated in teachers working to contract last year, Simpson said teachers got a raise every year. One of his first years in the district, the LNEA protested not over money, but on a Missouri Supreme Court ruling having to do with governance rights. If he could possibly go back and handle anything differently, he said he would try with the union protests. But he didn’t have the money to add to the budget.

“We’ve had to stretch the dollars all the time,” he said. “I’ve never had any extra dollars really. We met our needs, but there wasn’t any kind of extra.”

Around Simpson’s third year, Lindbergh started attracting young families, a trend that has never stopped, he said: “We’re getting younger every day.”

At a time when St. Louis County is losing population, young families are still moving to Lindbergh, revitalizing the area and even making Crestwood the nation’s hottest ZIP code for real estate in 2016.

And that ZIP code is also Simpson’s. Unlike many superintendents who move out of their districts when their time is up, Simpson isn’t going anywhere. He and Carol Ann will continue to live in Crestwood and enjoy his retirement. Like many other Crestwood homeowners, he regularly receives offers to sell his house in the mail. But he’s not selling.

He taught himself to play the violin as a young man, and he plans to keep playing with his band Sappington Creek and another group he plays in that performs at Schlafly Bottleworks.

But mostly he plans to enjoy his time with Carol Ann, who he has been married to for 44 years. They can go on spontaneous trips, something they haven’t been able to do in decades with the predetermined schedule of a superintendent.

“We like where we are, so we’re staying,” Simpson said. “I love south county and the lifestyle that affords. I think it’s a great place to live and lots to do, and right in the middle of the country so you can go any direction you want.”

With the possibility of more travel in his future, he’s been paying closer attention to news like Wow Airlines’ arrival last year with nonstop flights from St. Louis to Iceland.

“Who knows?” Simpson laughed. “I might go to Reykjavik.”

He lives so close to Central Office that he’ll probably drive by it every day. He might feel a tinge of emotion as he looks over at the building he built but doesn’t occupy anymore. But he won’t have any regrets about things left unaccomplished.

“I can’t think of a single thing that was left undone,” Simpson said.