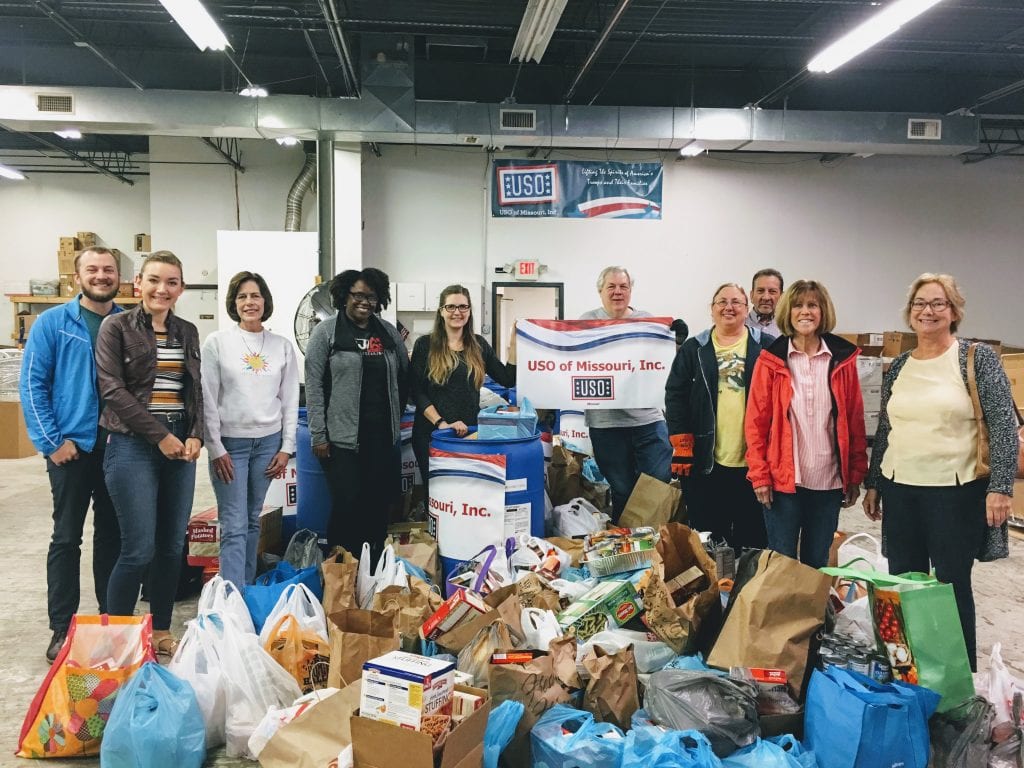 The Call Newspapers team with the thousands of donations from south county for the USO for Thanksgiving 2017.

The fifth annual Operation October food drive to benefit the USO of Missouri brought in record levels of food for Thanksgiving dinners for military families this year thanks to a new sponsorship by Call Newspapers.
Residents of south county, Arnold and Columbia, Ill., came out in droves to local banks, credit unions and Call Newspapers in an effort to fill the wish lists of military families at Thanksgiving. The October drive provides Thanksgiving meals — everything except the turkey — for active military families throughout the state of Missouri and in four counties in Illinois surrounding Scott Air Force Base.
“By far this is the most successful food drive, partnering with you guys, that we’ve ever had,” USO of Missouri Development Director Christine Trotter told the Call.
Volunteers assembled 2,184 baskets this year, including 400 baskets compiled from items donated by residents in south county. The loads from various banks and credit unions spanning the Call’s circulation area from Illinois to Sunset Hills required multiple trips to the USO’s assembly site, where volunteers from the Call sorted the local donations so they could be assembled into the baskets.
The baskets are assembled in a roasting pan and include stuffing, gravy, sweet and mashed potatoes, green beans, a pie crust, pumpkin pie filling and cranberries, with a gift card for a turkey.
The USO finds needy military families by asking commanders which families are in need who are E-5 and under. The baskets go out to military families ranging across Missouri, from Springfield to St. Joseph to Fort Leonard Wood, along with the Illinois side of the St. Louis region.
Boeing held an internal food drive for its employees which donated a large amount of food, but the largest community food drive came through the Call, Trotter said.
Call Publisher Debbie Baker said she was thrilled with the response from the community and how many families were helped through donations from south county.
In previous years, the Operation October drive focused on Crestwood and Sunset Hills, and this is the first time it has been promoted throughout south county.
“We’re thrilled we could contribute to a happy Thanksgiving for these families,” Baker said. “We were happy to expand throughout south county and get as positive a response as we did.”
The effort would not have been possible without the Call’s loyal readers, who are very supportive of the military, she said.
“I want to say thank you to our readers for their generosity, the co-sponsors who were our donation locations and the help of our entire staff,” Baker said. “It shows how supportive this community is when it comes to filling a need. We knew the Call was well-read, and this just reinforces more than ever that our readers are big contributors to the community.”
Baker looks forward to sponsoring the food drive again next year.
“This is the first time that we’ve partnered with Deb at the Call, so this was awesome,” Trotter said. “What she did for us was phenomenal.”
The weekly ads during October promoting the drive gave the USO name recognition in south county that it had never had before, which is helping the organization fulfill its primary mission of engaging more with the community, she added.
“They may not have known who we are but now they do,” Trotter said. “(The Call) gave us exposure to the community to learn more about us.”

Co-sponsors who served as drop-off locations: