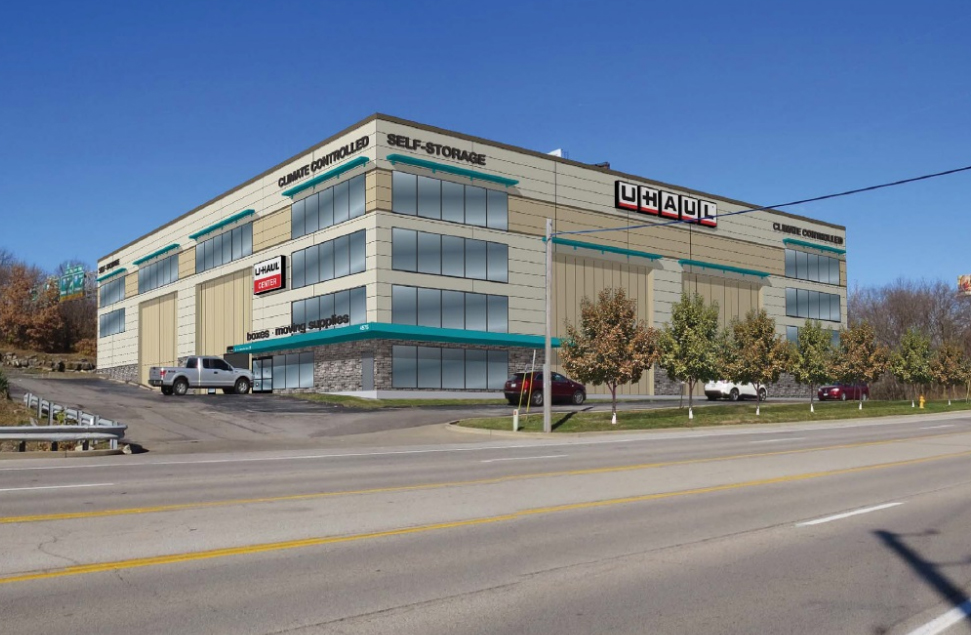 Pictured above: A rendering of the proposed new U-Haul facility at the Show Me Lanes site.

Proposed senior apartments and storage facilities have met the most resistance from south county residents at county zoning hearings, but last week a potential new U-Haul rental facility in Oakville saw more opposition at public hearing than senior apartments in Affton.
The new four-story U-Haul facility could replace the Show Me Lanes bowling center that has operated at 4575 Lemay Ferry Road since 1978. Local U-Haul owner Steve Langford proposes to reuse the current bowling alley building in the same way he’s repurposed old warehouse and factory buildings in downtown St. Louis for U-Haul buildings.
In Affton, Indianapolis-based Herman & Kittle Properties is seeking to construct the Cottages on Gravois, a 74-unit senior apartment complex on 10 acres at 8363 Gravois Road and part of 8430 Gravois Road, which is an unused part of New Mt. Sinai Cemetery that currently serves as athletic fields for St. George Catholic Church.
The county Planning Commission conducted public hearings for both projects Jan. 22, where dozens of residents came out to oppose the new U-Haul facility, while only two objected to the senior apartment complex.
Show Me Lanes owner and Oakville resident Ron Leveque said he and his co-owner Nora Hoechstenbach have worked double-shift days seven days a week at the bowling alley since 1978, and they are ready to retire.
“To be quite honest with you, we’re tired — I was 28 when we opened and I’m 68 now,” Leveque said. “South county has treated us well, and we think we’ve treated south county well.”
Hoechstenbach told the planning panel that both she and Leveque have had health problems and would like to step back from day-to-day work at Show Me Lanes.
“If we could take a pill to be young and healthy again, we would,” Hoechstenbach said. “We feel like we’ve done what we could do at Show Me Lanes.”
The site is listed for sale for $1.65 million, with real-estate fliers touting its direct location on Interstate 55 and access to more than 185,000 people within five miles.
The owners’ first preference would be for Show Me Lanes to stay a bowling alley, but Leveque noted that not as many people are bowling these days and the last new bowling alley built in the St. Louis region was in O’Fallon nine years ago.
But both the business and residential neighbors of Show Me Lanes say they want the site to stay a bowling alley or a similar use. The neighbors in the 41-home Partridge Farm Estates subdivision and the landlord and tenants at Mehltowne Plaza shopping center hired an attorney, Mike Doster, to fight the project.
Doster noted that the new building will be four stories and 90,000 square feet, compared to the current one story and 23,000 square feet of Show Me Lanes.
The extra stories will change the skyline around the subdivision, he said.
And although commission Chairman Wayne Hilzinger said that the planning panel does not make zoning decisions based on how many of the same types of businesses are in an area, Doster contended that there are so many self-storage facilities in Oakville and Concord that another one is not needed at all.
“We don’t believe a public purpose is going to be served by this facility,” he said.
But Langford and south county engineer Mark Doering, who represents U-Haul, said that they believe the tenants and owner of Mehltowne are opposed because the landlord also owns Mehlville Self Storage across the street rather than because they think it will affect their businesses.
Partridge Farms resident James Mesey, who backs up to Lemay Ferry, said, “Would any of you purchase a home with that kind of view behind it?”
Although some of the residents said they believed the U-Haul facility would reduce their property values, Doering predicted that housing values would not drop by a single dollar. Instead, the new and modern construction would cause surrounding business property values to increase, as they have elsewhere in south county, he said.