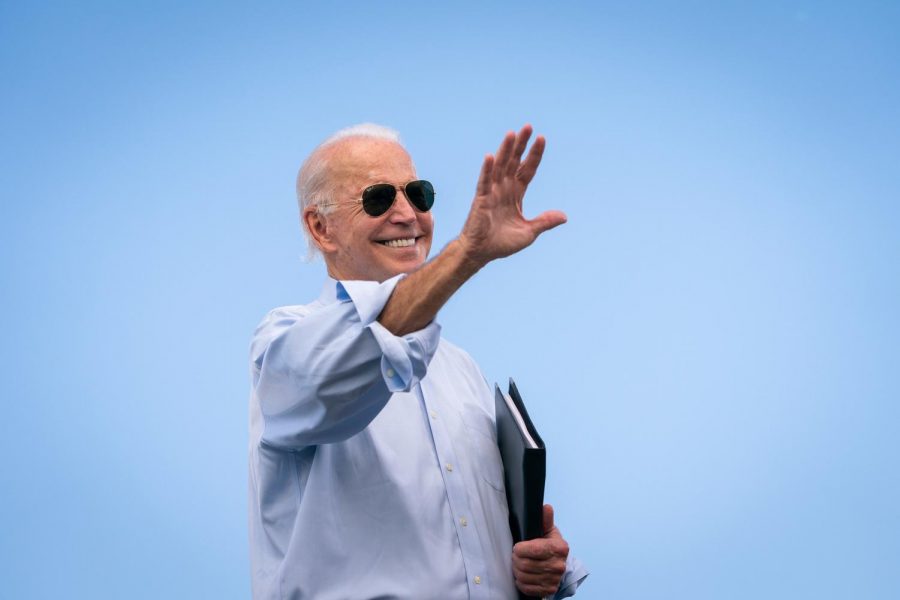 Joe Biden at a drive-in campaign rally at Broward College in Coconut Creek, Florida Oct. 29, 2020, 12 years after he came to South County for a campaign rally.

With current civic life pretty much at a standstill, The Call has been taking a look back over the last few months at past events that impacted residents of South County. In 2008, then-U.S. Senator Joe Biden came to town as part of his and then-U.S. Sen. Barack Obama’s first election campaign, speaking in a rally filled with pro-union supporters Sept. 9, 2008. Following that win over U.S. Sen. John McCain and his vice presidential candidate, Alaska Gov. Sarah Palin, of course, Obama became president and Biden became vice president for eight years.

The rally, which was not sponsored by the Mehlville School District and was funded by $8,000 in facilities rental fees paid to the district by Obama-Biden volunteers in St. Louis, attracted some critics at a Board of Education meeting, but district officials said that was mostly based on misinformation. No students were taken out of class or required to attend the rally, and then-board member Karl Frank Jr. said the district would have also hosted Palin if she had rented the facility. Palin and Biden both came to St. Louis later that year for their famous vice presidential debate. Obama came to the area in 2009 when he appeared at Fox High School in Arnold for a town hall-style meeting on his 100th day in office.

Biden will become the 46th president of the United States at noon Wednesday after a campaign in which he held virtually no large campaign events due to the COVID-19 pandemic, so here’s a look back at the time the future president visited Mehlville High School.

“McCain ‘a good friend,’ but the wrong man for president, Biden says.”

“I understand you had a couple visitors on the other side of the state yesterday — John McCain and (Alaska Gov. and Republican vice presidential nominee) Sarah Palin,” Biden said at the Sept. 9 rally. “They put together a good performance. And John McCain’s one of my oldest buddies … I think he’s dead wrong on everything, but he is my friend for real. He is.

“I heard a continuation. The report from Kansas City is no different from what I heard at the Republican National Convention. I heard what they said. But what they didn’t say, the silence was deafening on issues that matter to an awful lot of Americans — health care, college education, energy, retirement, pensions. I didn’t hear anything.”

In just less than an hourlong speech, the veteran U.S. senator from Delaware accused McCain of misleading voters in his campaign for president and attacked his plan to tax health-care benefits.

“(McCain) wants to, for the first time in American history, tax your health-care benefits,” Biden said. “No joke. I am not making this up … John McCain has reached down into the neo-conservative economic gospel and pulled out a proposition that makes some economic sense. Bad for America, but economic sense. He says that there’s no difference between your employer raising your salary a dollar and giving you an extra dollar in health care … If your pay is $50,000 and the health care is worth $12,000, you will now have to file taxes and pay taxes on $62,000. So that’s a change.”

Their plan would allow households earning up to $80,000 a year to buy into the same health-care plan that covers more than 17 million federal employees and officeholders. Biden said pre-existing conditions, catastrophic injuries and prevention care would all be covered in that plan.

Biden estimates that the average family then would save $2,500 a year in health-care costs. Biden also vowed to eliminate taxes for all senior citizens earning less than $50,000 a year and make sure that 95 percent of U.S. workers receive a tax cut.

To make up for that, Biden said Obama would require people earning more than $250,000 a year to pay more in taxes after 2010.

“Sometimes, organized Democrats talk about the wealthy as if they’re not patriotic,” Biden said. “… They’re just as patriotic as poor folks. The difference is we just don’t ask much of them. Not a joke. So what we are going to do is we are going to insist that the tax cut for those people making over $250,000 expire in the year 2010. They’ll still be paying less taxes than they did under Ronald Reagan, but they’ll be paying slightly more taxes than they’re paying now … Tell them it’s time to be patriotic.”

Biden claimed that increasing taxes on the wealthy would produce more than $125 billion in new revenue that would go toward tax cuts to families with children in college.

“We can provide and we will provide a $4,000 tax cut for every single solitary kid you have in college off your bottom line in taxes,” Biden said. “And it is refundable. So if your taxes are only $3,000, the government will send you back another $1,000 if you have a kid in school. And we can pay for that with a fraction of the tax cut for people making over $250,000.”

“You know, I could walk from here to Springfield. I doubt I’d find anybody who’d say we’re making great progress economically unless I accidentally bumped into John McCain.

“… We left this president (in 2000) with $230 billion in extra cash in the till from the operating budget … George W. Bush is going to leave President Barack Obama with an IOU in the drawer of between $400 billion and $500 billion for just one year.

“So please … as I tell my Republican friends, spare me telling me about who is fiscally responsible.”

And while pointing out that Iraq has a $79 billion surplus, Biden believes it is time for U.S. political leaders to come to a solution to stabilize Iraq while following through on a timeline to send home U.S. soldiers.

U.S. Rep. Russ Carnahan, D-St. Louis, was on hand at Mehlville Senior High School to support Obama and Biden and to tell his “independent-minded” south county constituents that if they want true change, McCain’s similarities to Bush make him the wrong choice.

“We’ve seen an unnecessary war and a distraction from the threats in Afghanistan,” Carnahan said. “We’ve seen the biggest debt in history, the highest gas prices, the highest profits for big oil, the biggest transition of wealth out of our country overseas in history, the highest number of people in our country ever that believe we’re going in the wrong direction, the lowest opinion of the U.S. around the world, record home foreclosures, record student-loan debt, the list goes on and on.

“This is the record, my friends, that John McCain bragged about in the campaign that he has supported 90 percent of the time. Is there anybody here that thinks we only need 10 percent change? Because if you do, John McCain and Sarah Palin are your candidates.”

And while championing Biden as an “expert” of foreign affairs, Carnahan also jabbed at the track record of Palin, whom Biden will debate Oct. 2 at Washington University in St. Louis.

“For all (McCain’s) tough talk, he buckled to the right wing and his party and picked someone with zero experience in national government and zero experience in foreign affairs,” Carnahan said. “And there’s no way you can dress up that record — even with a lot of lipstick.”