‘Reimagined’ Lindbergh High will be weighed by voters next week 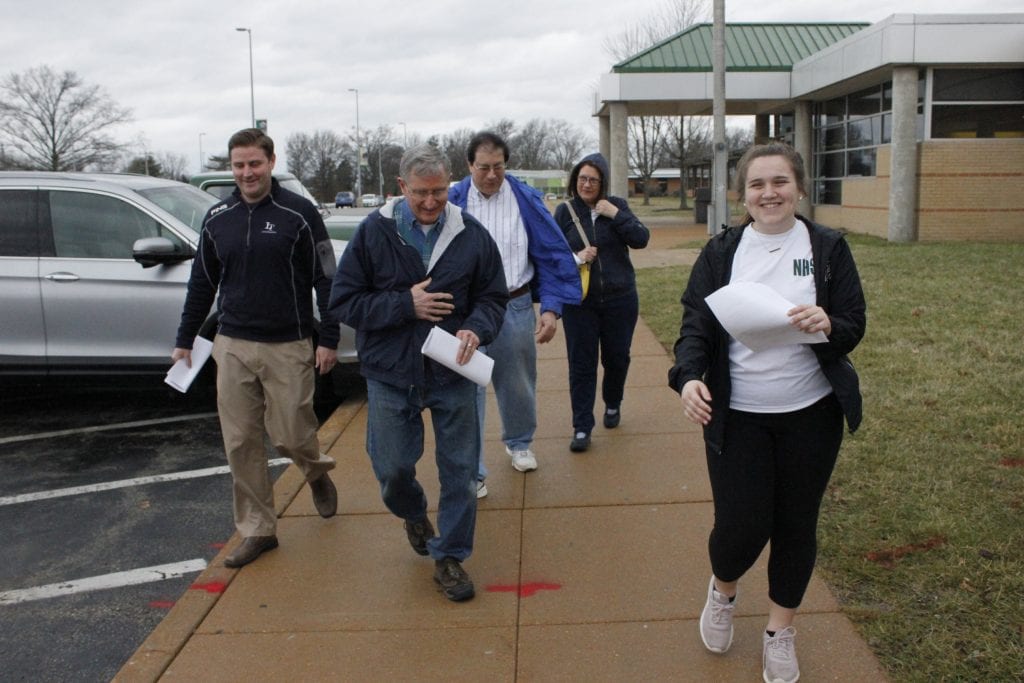 A committee “dreamed big” last fall about what a new Lindbergh High School would need for the next 50 years, and voters decide whether those plans happen Tuesday, April 2.

Voters will weigh whether to approve a $105 million, 83-cent no-tax-rate-increase bond issue, Proposition R for “Safe and Ready,” that would build a new Lindbergh High School on the current school site, but would also add secure entrances and systems to all schools that don’t already have them.

If voters approve, the district will build not just a new Lindbergh High, but a “reimagined” high school designed more for the way students will learn in the future, with more collaborative, open and flexible spaces rather than the desks in rows of yesteryear.

Residents can get an inside look at the current style of learning in the school by taking a tour from 1 to 3 p.m. Sunday, March 31, ahead of the Tuesday vote on Prop R.

It will strive to keep open spaces inside and connecting old and new buildings, while fixing the California-style open campus that leaves students walking back and forth between buildings — something that was seen as modern at the time of construction, but is now considered a security risk as more than 60 unlocked school doors have to be used each passing period and students mingle with delivery drivers visiting maintenance shops in the middle of campus.

A committee of parents, residents, administrators, teachers, students and Board of Education members met for three full days last fall at the Cortex Innovation District in St. Louis with architects to come up with ideas on what “programming” a new high school might look like. Each of the three meetings lasted eight hours.

It was a unique way to come up with ideas for what committee members envision as an innovative high school like some of the state-of-the-art schools they visited.

If Prop R is approved, the new Lindbergh High School would be the first fully rebuilt high school in St. Louis County in decades.

Several of the buildings would be new, but the design is built around reusing a three-story building in the middle of campus, which maximizes the existing space used so that the cost is lower.

At the first “programming committee” meeting, the group threw out suggestions no matter the cost. But at later sessions, ideas were pared down based on budget.

Ahead of the meeting, teachers visited innovative high schools across the country, then shared what they learned with the committee at Cortex.

“The message was, from the very beginning, ‘Dream big,’” Superintendent Tony Lake said.

He intentionally designed the process as a different way to operate than Lindbergh has in the past, when superintendents made major decisions in a more top-down manner.

“That’s not the process that this has been,” Lake said. “It’s been a very organic, open, ‘What’s on your mind?’ and everyone has the same voice in this room, throw it out there, dream big — understand when we dream big we may not be able to get everything we want, but if we don’t put it all out there we may not be able to know what we can and can’t do. And that’s a culture shift because I’m not afraid to say, ‘Hey, dream big, but you know what? The budget doesn’t allow that.’”

That type of process was needed to get the sort of creative ideas that can create a flexible space that still meets student and teacher needs when everyone in the room is no longer involved in the district, Lake noted.

The committee intentionally brought members of the community with different school specialties together, from science to band to athletics. But Lake got up at the Oct. 30 Cortex meeting, the second of the series, and reminded everyone to take a broader view beyond their own narrow experience.

“Just a reminder, 75 years from now when people look back on this group right here, I want them to be able to say they got it, they understood what a design of a school building needed to look like because it’s so flexible and agile and spaces can be used for multiple things,” Lake said. “No matter what that experience is we want to give kids, it can happen 75 years from now.”

The members of the committee put in the hours needed to make such huge decisions, board Secretary Mike Shamia said.

“Twenty-four hours of programming meetings and school visits, you’re talking six months or a year of collaborative work toward this decision,” Shamia said.

“It’ll serve generations of students into the future,” board President Karen Schuster said. “I’m really excited about this.”

Key design decisions include building a new 1,500-seat auditorium since the district considers the current 1,000-seat auditorium too small. The round library building, one of the most visible parts of the current high school from Lindbergh Boulevard, is slated to be torn down to build a new library in the middle of campus more accessible to students.

“I think we talk a lot about how you make a school with 2,200 students feel a bit smaller, and I think interdisciplinary teams would help with that,” said panel member Ronni Zagora, director of curriculum and student programs. “I like the idea of a science lab being in such proximity to other things that it’s going to just be the curiosity — ‘they’ve got something growing in there.’”

As it stands now, different disciplines may be next to each other, “but the doors are closed,” Zagora noted.

“There’s no reason the biology class has to be happening right next door to the chemistry class,” committee member and board Vice President Jennifer Miller said. “Chemistry makes more sense by math, right?”

“From a staff cultural standpoint, there’s a lot of benefit of getting people outside their department,” LHS Principal Eric Cochran said. “This allows you to also know and appreciate the work and maybe even again — what’s best for kids? — having teachers using each other as resources where they’re incorporating science into, ‘I’m doing a history project or humanities project with a scientific bent to it.’”

The committee also had to decide their preferred layout of hallways and what should be in hallways between classrooms, “flexible” space or teacher work space.