Questions about Mehlville’s finances dominate forum for board candidates 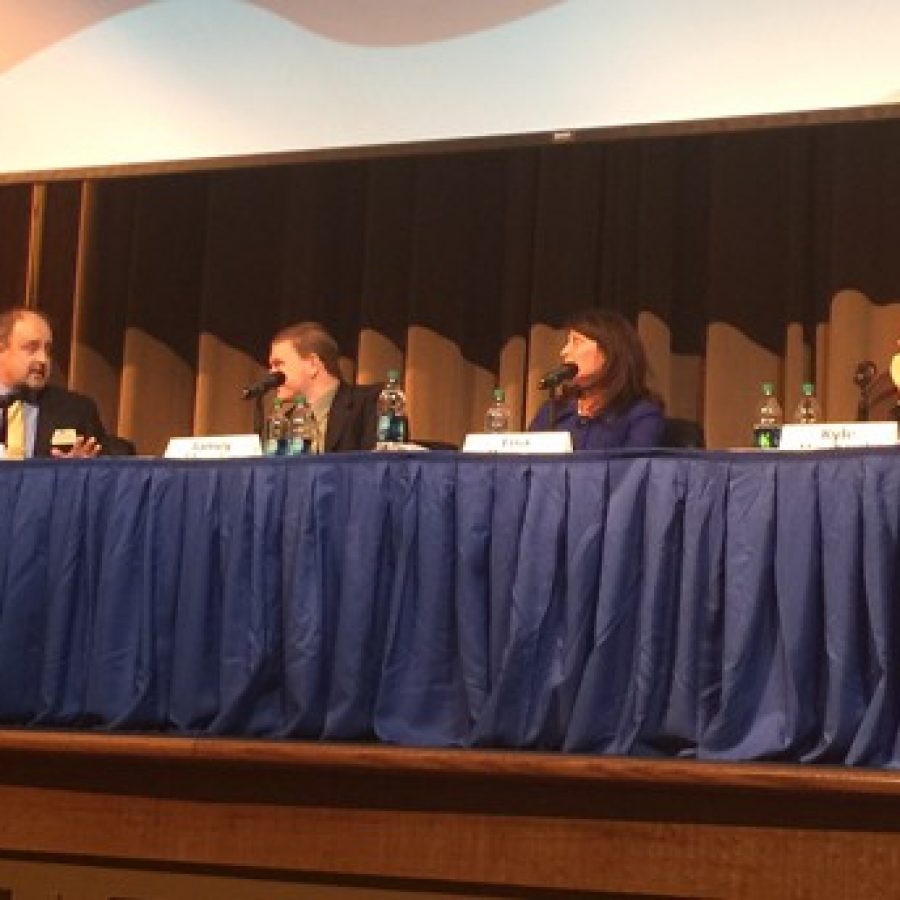 As expected, last week’s Mehlville Board of Education candidate forum was dominated by questions about finances, including where candidates would make

and whether they could support a

In the only forum at which all four candidates will appear before Tuesday’s election, technical sales agent and incumbent board President Ron Fedorchak, 48, said he has shown his leadership and made strides to change Mehlville’s culture over the last year by bringing in Superintendent Norm Ridder to introduce strategic planning to the district.

“We used to be reactionary, and now we look at data and we get opinions from the community,” he said.

Fedorchak’s challengers for two open seats all said they welcome the strategic plan and its focus on academics, and they hope voters choose them to carry it out.

St. Louis University professor and Vice President for Undergraduate Education Lisa Dorsey, 46, said she knows what it takes to get students ready for college due to her experience as a professor. Attorney Kyle Haubrich, 35, said he would bring “common sense” to the board. Clock craftsman Jamey Murphy, 26, said he is well-versed in policy from when he served as chief of staff to former Sen. Jim Lembke, R-Lemay.

Dorsey and Fedorchak both have children in Mehlville schools, Murphy has children who will attend and Haubrich’s children are homeschooled but will go to public middle and high school.

Fedorchak was appointed to the board in 2011, then won election in 2012 alongside Katy Eardley, who declined to run again.

The board will vote May 21 on up to $8 million of budget cuts that could slash teaching jobs, buses and clubs, along with a proposal to add $1.2 million in revenue by increasing the number of Voluntary Interdistrict Choice Corp., or VICC, students back to levels of three years ago.

Some of the candidates spoke only in general terms when moderator Kathy Weber posed the question, “Would you vote to place a reasonable tax measure on the ballot, and if not, where would you cut $8 million? Please be specific.”

The classroom should be the “last place we should cut,” Dorsey noted.

“Based on the most recent budget presentation by the Finance Committee and Dr. Ridder, it appears that we’ve cut as much as we can cut without negatively impacting student achievement,” she said. “So in short, if we can’t support academic achievement through the means of our state funding formula, through VICC and through our current tax income, I would support a request to the community for a tax increase, because if we cut any more from the budget it will be at the cost of academic achievement for our children.”

When it comes to a ballot measure, “surveys and past experience” indicate voters will not raise taxes, Haubrich said. Instead, he proposed rolling back the $350 base salary increase that teachers received last year, which he said would solve the entire $8 million deficit if combined with freezing the technology program and attrition of retiring teachers.

“I think doing this does three things: 1. It ensures that no teacher loses his or her job, and 2. It ensures that no student loses their extracurricular activities, be it band, sports, theater or busing,” Haubrich said. “And it means we would not have to accept VICC students — and I am adamantly opposed (to VICC). I think it’s morally wrong to balance your budget on the backs of city kids.”

Fedorchak said to Haubrich, “I’ve just got to kind of question. Rolling back the $350 increase to the base would basically generate about $350,000 toward the deficit — so you’ve still got $7.5 million that you’ve got to come up with.”

“I think your numbers are wrong,” Haubrich replied, later adding that he has not seen a budget detailed enough to identify waste.

Haubrich provided the Call a copy of his plan, which estimates $5.3 million in savings generated through across-the-board salary cuts, $4 million from staff members buying insurance through the healthcare exchange instead of through the district, or $9.3 million if the plans are combined.

Although that plan seems unlikely to be accepted by the board or employees, Haubrich said that he was adamantly opposed to cutting any clubs, buses, teaching jobs or adding revenue through voluntary transfer students.

“Cutting that stuff is morally wrong, as it’s balancing the budget on our students’ backs,” he said.

“How are we going to pay for it, though?” board member Jean Pretto said from the audience.

Fedorchak said “it’s not fairy-tale land” where board members can opt out of hard decisions: The reality is that revenues do not match inflationary expenses and the board has “no choice” but to cut at least $4 million this year and, without a tax measure, another $4 million next year.

“I won’t support and I have not supported putting anything on the ballot until we get that word from our community,” Fedorchak said. “We’re listening to our community, and when we get the word that says we’ve cut enough, we don’t want to lose extracurriculars, we don’t want to lose the bus service, we don’t want to have to cut teachers,” he would vote to place a tax measure on the ballot. Mehlville might have to cut so many teachers this year and next that it could dip down to state minimums, a “very, very dangerous position to be in,” he added.

Murphy termed cuts a “necessary evil,” but did not endorse any beyond more sports fundraising, which got pushback from parents in the audience who said they already fundraise as much as they can. Instead, Murphy suggested a zero-based budgeting process to rebuild the budget from the ground up and prevent cuts. Mehlville already uses zero-based budgeting in key departments since previous budget cuts in 2011.

“I think the worst thing that we could do is put something on the ballot and have it fail again — I think that would be absolutely terrible for the school district. So step 1 is actually rebuilding the trust,” Murphy said, noting he would work in the community to make sure that “whatever proposal gets brought to them is one that represents their views.”

“You didn’t mention what you would cut, or if you’d support a tax increase,” Fedorchak reminded Murphy.

Later, Murphy added, “Do I want to raise taxes? Absolutely not. Do I think it’s maybe a necessary evil down the road? Well, that’s something I think we need to address.”