Last of two parts: Board to consider contract for Central Office Sept. 13 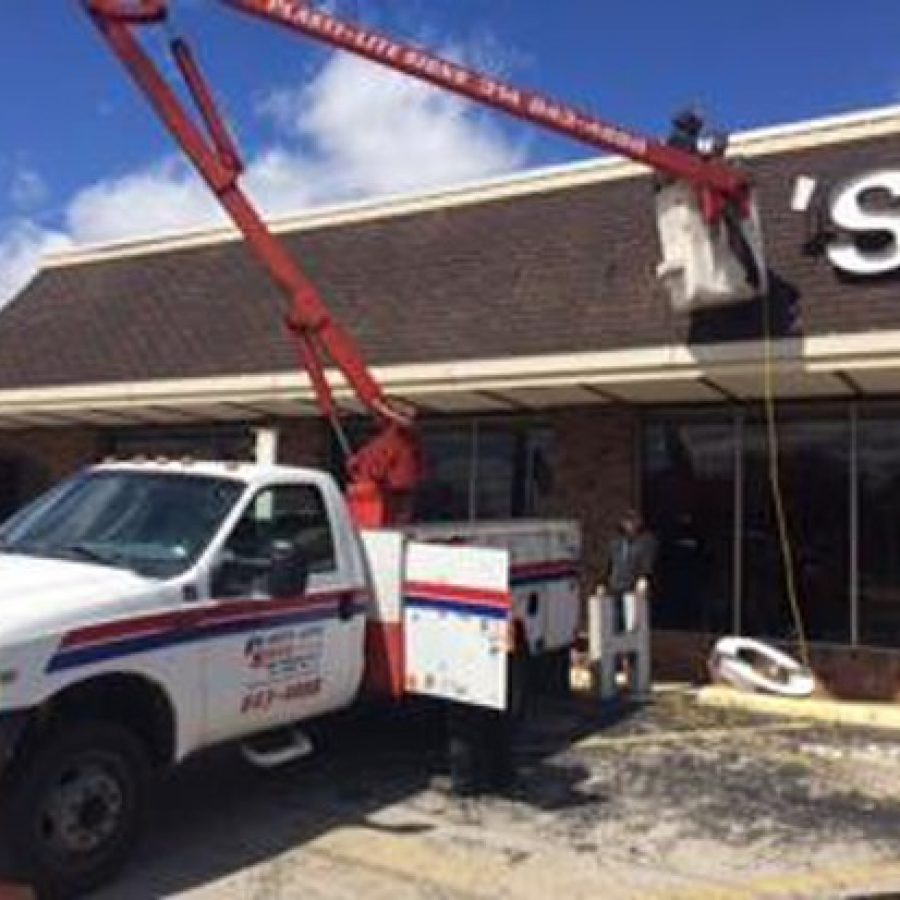 In this photo from the Sappington-Concord Historical Society, the Johnny's sign is removed after Lindbergh Schools bought the former grocery store last spring.

Lindbergh Schools’ purchase of the former Johnny’s Market site to construct a new Central Office building will benefit the district for many decades to come, according to Superintendent Jim Simpson.

At that meeting, resident Basil Pappas, parent of a district teacher, called for the Board of Education to fire Simpson and Chief Financial Officer Charles Triplett, after alleging improprieties with the purchase of the property.

Board of Education members fully support Simpson and Triplett, according to President Kathy Kienstra.

Criticism of the property purchase began in May, roughly the same time district teachers began expressing their dissatisfaction with a 1.25-percent salary increase.

Teachers voted in late May to reject the raise, which was approved by the board in June.

Besides the amount of the raise, teachers were unhappy because they did not advance a step on the pay schedule for having another year of experience.

To provide for step increases, an average 3-percent pay raise is needed to fund the pay schedule.

In July, Lindbergh National Education Association President Kim Scronce announced teachers will work to contract until they see “significant progress” on a series of demands the union has made.

At the May board meeting, the district’s purchase of Johnny’s was criticized by resident Ron Zytniak. Zytniak’s wife, Ann, is the mother of a Lindbergh teacher. Ron Zytniak reiterated his criticism of the property purchase at the July board meeting.

The purchase of the property is a critical piece in addressing the aggressive enrollment growth Lindbergh is facing, according to Simpson. For the new school year, district officials project an increase of over 300 students, bringing total enrollment to nearly 6,700 students.

A new two-story, 24,000-square-foot Central Office building will be constructed on the former Johnny’s site, restoring eight to 10 classrooms at the high school to address the surging enrollment.

The new Central Office building will serve the district well for many decades, Simpson said.

“That Central Office will go two lifetimes maybe there. It will go for many decades and it will serve this district in outstanding ways.”

The Board of Education is scheduled to consider awarding a bid for the construction of the new Central Office building when it meets Tuesday, Sept. 13.

District officials have been criticized for practically every brick-and-mortar decision they’ve made to address growth, according to Simpson.

“Every brick-and-mortar (project) we’ve built is to handle the tremendous number of new students that are coming in, and yet, it’s gotten tangled up in terms of ‘I’m mad about money, so now I want to come at you in this direction,’” he said.

In July, Ron Zytniak was critical that the Lindbergh Link reported the district saved $76,397 by purchasing the site from Meland Properties LLC at less than the certified appraisal price of $1.74 million.

He also contended Lindbergh overpaid for the property. When Meland Properties bought Johnny’s for $900,000 in 2014, the county had appraised the site’s value at $867,400, he noted.

“… They are wildly not what your real estate is worth and most people are pretty happy about that because they pay lower taxes,” he said. “If your property could be purchased for true value of what’s on the county’s tax rolls, then that would be something the district would love because taxes would be more in line with what value is, but as you can see, it’s not that way.”

The county’s appraised value of the site was more than $2.3 million.

At the August board meeting, Pappas contended the appraisal the district received from AB Valuation Services of Union was “substantially flawed,” noting Dan Jones of Meland Properties recommended the appraiser.

He cited an email from Jones to Triplett regarding obtaining an appraisal that stated, “… We can order one to make sure it appraises for the contract price.”

Simpson noted Circle K had a $1.75 million contract with Jones to purchase the former Johnny’s property, contingent on obtaining zoning from the county for a gas station and car wash. But a bill to approve the gas station without a car wash later was dropped from consideration by 5th District County Councilman Pat Dolan, D-Richmond Heights.

Because of the contract with Circle K, Simpson said Jones knew the appraised value of the property.

“Dan Jones knew what he had … and he knew that appraisal would hold up,” Simpson said, adding, “When national corporations are going to pay you this much for a piece of property, that’s the value of the property. There’s no different levels of value. That’s what that property is being appraised for by Circle K. They’re a smart company. They’re not interested in overpaying for anything …”