Walls of windows proposed for branches concern board 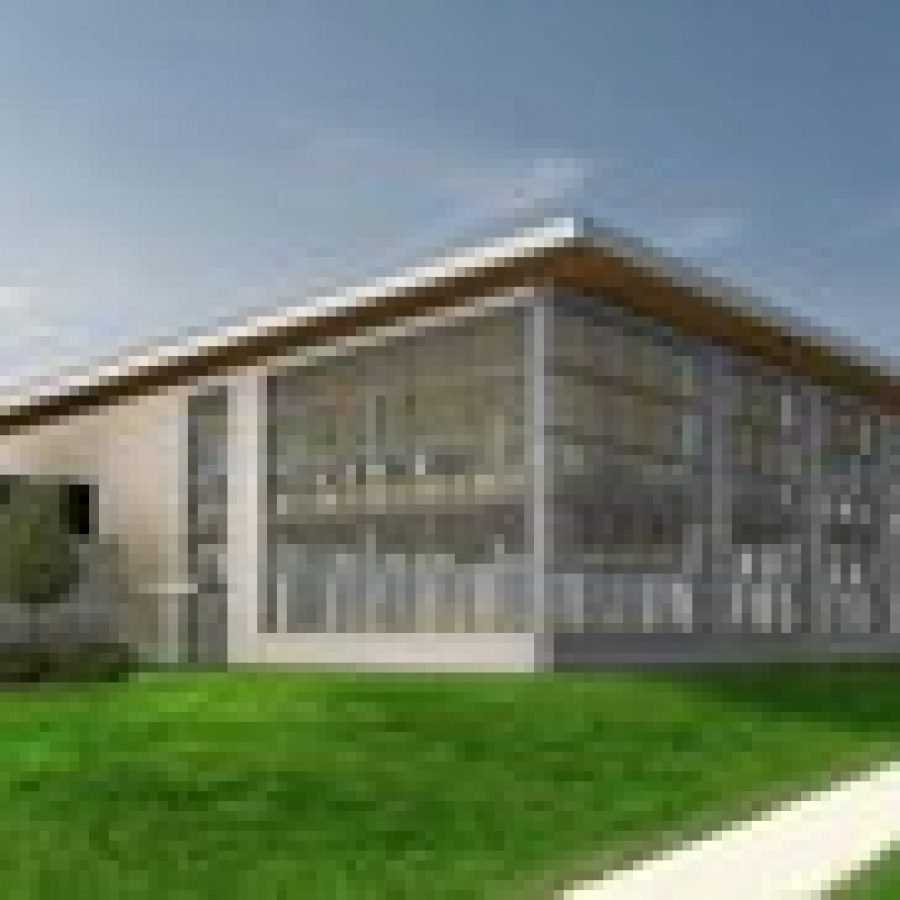 St. Louis County Library officials provided this rendering of the proposed new Tesson Ferry Library Branch at Gravois and Musick roads. Library officials note that this is a very early conceptual rendering, and a number of factors could change the final design.

Negotiations on the cost of road improvements around the new Tesson Ferry Branch County Library are still ongoing, but the public is getting its first glimpse of what the new library might look like.

Preliminary architectural renderings that St. Louis County Library staff presented for the first time to the Library Board of Trustees at their Nov. 18 meeting show that the new Tesson Ferry branch will be white and modern, with a two-story glass wall facing Grant’s Farm.

“We’re trying not to completely fall in love with things about these buildings, because we do have a budget to meet, and so we certainly won’t exceed that budget,” Library Executive Director Kristen Sorth told the board. “But these are just the really preliminary discussions that we’ve had, and we’re really pleased. And we think that the branches are going to be very beautiful.”

Since the designs for the new library, by architects Christner Inc. and Bostwick Design Partnership, are not final, the next step in the design process is for construction firm S.M. Wilson to confirm that the designs fit into the library’s $20 million budget, which comes out of revenue from Proposition L, a 6-cent tax-rate increase approved by voters late last year.

Regarding the Tesson Ferry branch, the library’s facilities master plan states, “The building structure is deteriorating, mechanical systems are failing and the property features multiple sinkholes. The design of the parking lot is inefficient and the number of spaces is inadequate.”

The master plan recommends the 55-year-old existing branch be replaced with a new building on a new site.

As proposed, the new Tesson Ferry branch will be 38,000 square feet, compared to the current branch’s 27,775 square feet.

If plans go through for it to be built in the library’s preferred location on the corner of Gravois and Musick roads in Affton, the new library’s two-story wall of glass will face Grant’s Farm, allowing drivers going by to see into the library and library patrons to look over at Grant’s Farm.

The proposed library site at Gravois and Musick roads used to belong to the Busch family and was a breeding ground for Clydesdales.

It is now owned by developer McBride Berra, which is building a luxury subdivision, Grant’s View, on property next to the site.

The County Council is now considering a measure to approve the rezoning for the library, which was recommended by the Planning Commission last month.

The county Department of Highways and Traffic has said that the library cannot build an entrance into the site until road improvements are made to the busy intersection at Gravois and Musick.

The county, the Missouri Department of Transportation, library and McBride Berra are currently in negotiations over the cost and scope of the required road improvements, but Library Communications Director Jennifer McBride had no update to give on the status of those negotiations, other than to say they are ongoing.

All three new libraries paid for by Prop L, Tesson Ferry, Meramec Valley and Lewis and Clark, will be built of white stone and boast similar new features, such as a designated book dropoff point and a pedestrian walk through the parking lot to the main entrance.

The new Tesson Ferry Branch will have a bigger parking lot than the other new branches, with 182 spaces, but will have one pedestrian walk compared to the two Meramec Valley and Lewis and Clark will have.

Energy-efficient vehicles will get to park in closer parking spaces.

To help with stormwater retention, the library plans patches of grass and plants native to Missouri throughout the lot, and the library hopes to host a community garden on the grounds.

For all three new libraries, the design phase is one-third complete, said Todd Hornberg of construction management company Landmark, which is overseeing the new construction for the library.

When the library board got its first look at the designs for the new branches, board members’ primary concerns revolved around the walls of windows built into all three new branches.

“There’s a lot of glass. HVAC-wise, is that realistic?” Board of Trustees member Stephen Sachs asked. “I know that you can increase capacity, but is that something that you look at in the design, the operating costs?”

“Absolutely,” Hornberg replied, noting that the design development phase where engineers look at studies of operational costs is coming up.

“The glass, the openness, is really what we’re trying to achieve with the branches, and that’s also a trend in libraries, that you want people to be able to see outside,” Sorth said. “At our current branches, any place we have windows are the most popular locations in the branches.

“No matter where they are, people want to sit there.”

Although he agreed the walls of windows are beautiful, President Lynn Beckwith said he shared the concerns outlined by Sachs.

“Glass breaks — and that’s an awful lot of glass,” he said. “And that’s just a concern of mine. It’s beautiful, but at the same time, glass breaks, and I don’t want us to be constantly repairing glass that’s broken, inadvertently or advertently.”

Board Treasurer Elena Garcia Kenyon also noted that even cleaning that many windows could be a significant expense for the library.

Hornberg agreed that the management team would take these costs into account while it analyzes the design.