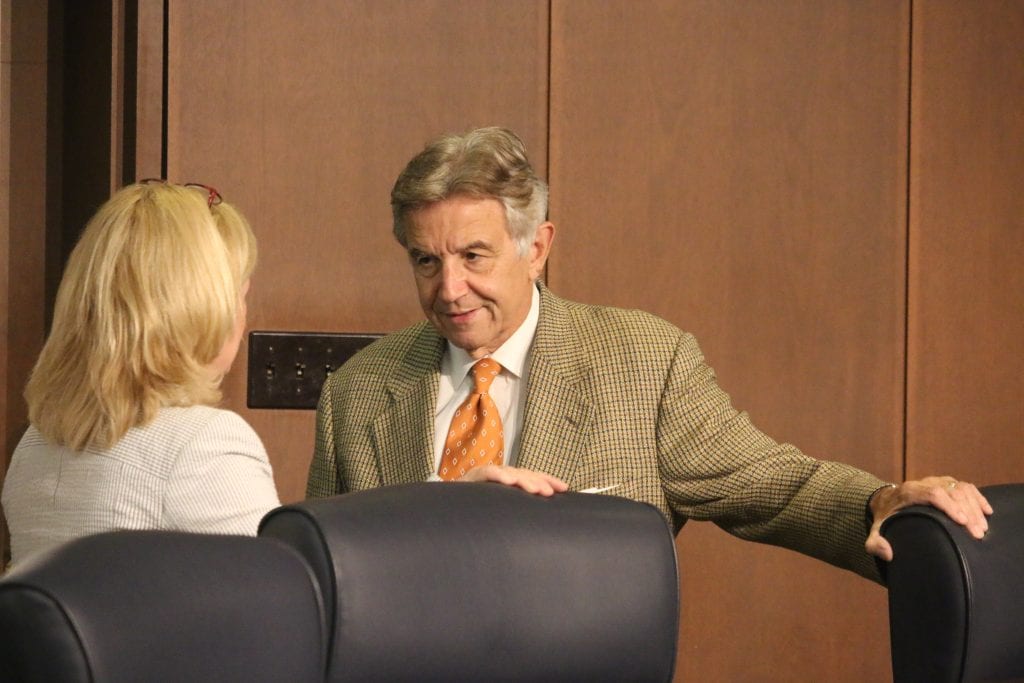 County Council members Ernie Trakas, right, and Colleen Wasinger talk before the council meeting July 27. The council called a special meeting at 1 p.m. to discuss the Charter amendment that was pulled off the Aug. 7 primary ballot. Photo by Jessica Belle Kramer.

Members of the board of the St. Louis County Port Authority could be subpoenaed to provide testimony to the County Council for its latest ethics investigation after they failed to show up to testify last week.

The failure to show enraged 6th District Councilman Ernie Trakas, R-Oakville, who received a letter from Port Authority attorney Charles Hatfield of the law firm Stinson, Leonard & Street the day before noting that the board members would not show up unless Trakas met privately with Hatfield to let him know the scope of his investigation.

The board consists of Oakville resident Greg Hayden, Frank McHugh of Florissant, Dan Thies of Frontenac, Edward James of north county and Nancy Napoli. They were all appointed by former County Executives Buzz Westfall or Charlie Dooley.

The Port Authority was created decades ago, but gets $5 million a year in lease payments from 80 acres it leases to River City Casino. Those millions primarily went to causes in Lemay for years, but after five years, the payments could go to fund anything in the county. They’ve been used for post-Ferguson rebuilding in north county, marketing contracts and other projects, including the land purchase for the new Affton Southwest Precinct at Sappington and Gravois roads, a proposed St. Louis Blues practice ice arena in Creve Coeur Park and the redevelopment of Jamestown Mall.

Although the Port Authority spends county dollars, it has typically operated without extensive oversight from the council. If Trakas has his way, that will change.

Even before the council officially heard from any Port Authority board members, it came out swinging, voting 6-1 July 17 to essentially fire them all. Now the council is considering legislation that would allow each council member to appoint his or her own board member to the organization. Even as the council fired all the board members, council Chairman Sam Page, D-Creve Coeur, promised that they would still testify. He and Trakas both said Hayden had told them he would gladly testify.

But that mood changed at the Ethics Committee hearing. With a court reporter present, Trakas scolded the absence of the “unelected neo-bureaucrats” and “unelected apparatchiks” of the Port Authority who were refusing to respond to the council’s “legitimate and urgent concerns related to Port Authority operations and management.”

Stinson attorney Andrew Scavotto did show up, but repeatedly told the council he was only there to observe on behalf of his clients, not answer questions. He said his law firm would prefer to talk about the scope of the committee’s work in closed session.

Some council members signaled a willingness to talk about the issues in closed session, but County Counselor Peter Krane said he wasn’t sure if the committee could hold closed sessions since it does not oversee any personnel or real-estate issues.

“Ideally all of this would be conducted out in the open,” said 3rd District Councilwoman Colleen Wasinger, R-Huntleigh.

Later that night, Trakas and Page both said in a public County Council meeting that Port Authority CEO Sheila Sweeney could be under federal investigation. The Call was unable to independently confirm that allegation, which Trakas said came from an “impeccable” source that he would not name. Page said he had heard it from another reliable source who is not the same person, but also declined to reveal any information about his source.

Trakas alleged that Sweeney was in her car and called the St. Louis County Police Department to complain about a car that seemed to be tailing her. When a county police officer responded, the officer allegedly discovered that the people in the car tailing Sweeney were federal agents.

Pressed by reporters after the meeting if he had contacted county police to get a police report or any evidence of his assertion, Trakas said, “Isn’t that what you guys do?”

Page said, “I did not contact the county police. I would depend on you all to follow up and see what they have to say. I don’t think they’ll lie to you.”

County police said that they had received no call from Sweeney and had no evidence of any call report or incident report from the alleged traffic stop. Even if an officer did not write a report on the alleged incident because of the involvement of federal agents, any 911 call would have been logged, spokesman Sgt. Shawn McGuire said.

U.S. Attorney Jeff Jensen said in an email that he does not comment on the existence or lack thereof of investigations. Sweeney spokeswoman Katy Jamboretz did not respond to requests for comment.

County Executive Steve Stenger said he had not heard of any federal investigations into any aspect of county government.

County Communications Director Cordell Whitlock noted that the allegation was made two weeks before Stenger’s re-election bid by Trakas and Page, who do not want Stenger re-elected.

“I think it’s highly irresponsible two weeks before an election for him to just throw that out there and throw Sheila under the bus like that,” Whitlock said. “On a human level, just think about it. You don’t just throw that out there that someone’s being investigated by the feds. Now if you have proof… that’s one thing. But you’re dealing with somebody’s life and somebody’s reputation… I think it’s highly irresponsible that (Trakas) threw that out there with no substantiation. We’re 14 days before an election, and he despises my boss. He plays games like this. He’s been playing games for months on end.”

Page said that he finds it plausible that federal agents could be interested in the Port Authority by reading newspaper reports, so he finds his source “credible.”