Porkchops in blue cheese is a tribute to the Blues 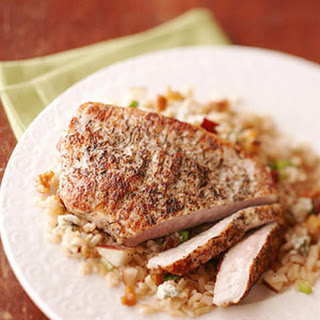 Around the Kitchen
By Bill Milligan
For the Call

I’ve been thinking about porkchops in a blue cheese sauce ever since I noticed it on the menu when my son took my wife and I out to a sports bar in Newtown, Connecticut, this summer after one of my grandson’s baseball games.

I figured it’s time I make my own version so I could stop thinking about the meal.

It’s rather like an old song that keeps playing in your head: The sooner you play it, the sooner you can forget about it.

Mashed sweet potatoes or brown rice and broccoli rabe are the perfect side dishes for this, my tribute to the Stanley Cup-winning St. Louis Blues.

Now you can have two songs in your head: “Gloria” and these porkchops.

Bring 2 cups brown rice to a boil until done. In the meantime, liberally spray the inside of a 9-by-12-inch baking dish and set aside until your rice is done.

In a small bowl, stir together thyme, ¼ tsp. salt and ½ tsp. ground pepper.

Rub into both sides of your pork chops.

If you have an iron skillet, cook them over medium-high heat until browned, about 4 minutes per side.

Arrange the browned chops over rice in your baking dish.

Bake, covered, in a 350-degree oven for about 30 minutes, until the juices run clear.