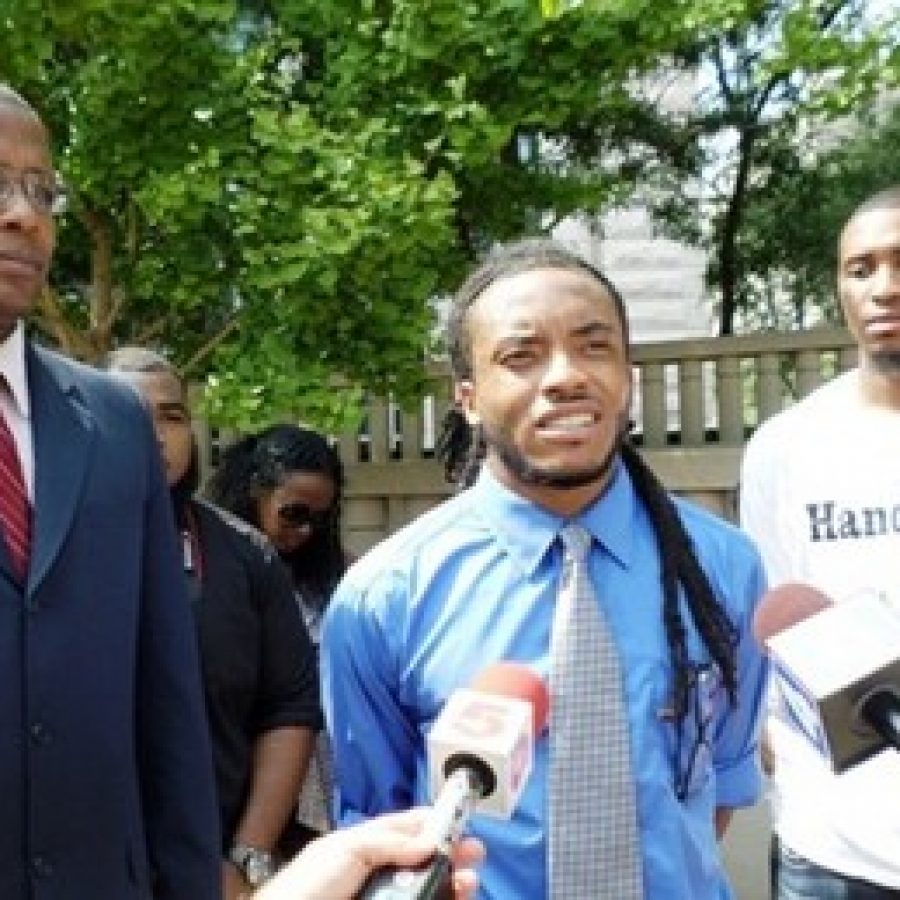 Dwayne Matthews Jr., center, talks about his encounter with police in Ferguson, which is part of a \$40 million lawsuit against the county.

The first lawsuit against St. Louis County from the police response to protesters in Ferguson was filed last week — a $40 million federal lawsuit that alleges “excessive force and rogue actions” by unnamed county police at the protests.

“The police were completely out of control  They were not operating by proper policies and procedures, and they used excessive force on a regular and consistent basis,” Black Lawyers for Justice President Malik Shabazz said outside the Thomas F. Eagleton Courthouse in downtown St. Louis after filing the lawsuit Aug. 28.

The lawsuit — which was initially rumored to be for $200 million — is on behalf of five plaintiffs, who Shabazz is calling the “Ferguson Five.” The five north county residents allege violations of their constitutional rights, including false arrests and excessive force, at the hands of county and Ferguson police in Ferguson from Aug. 10 to Aug. 13, the days immediately following Ferguson teenager Michael Brown’s killing by Ferguson police officer Darren Wilson, who lives in Crestwood but has not appeared in public since the days following the shooting.

Plaintiff Tracey White, who lives in the Ferguson-Florissant School District, said she attended a “Peace and Love” March in Ferguson the night of Aug. 13, then was arrested in the McDonald’s on West Florissant Avenue in the same incident in which two reporters were arrested for failure to disperse.

White’s 17-year-old son, who she said is on the honor roll, was also arrested, but they were never told what they were arrested for or whether they were charged with anything after they were released hours later from jail in Clayton, she said.

“It looks like something out of a movie, it was so horrifying. We did nothing wrong,” she said. “One of the officers threw me to the ground  As they were cuffing me with the plastic bands, I told my son to get his iPad, and they said, ‘You’re coming with us as well,’ and they arrested him as well.”

The day after the McDonald’s incident, President Barack Obama and journalists’ coalitions condemned the arrests of reporters doing their job. One of the journalists, the Huffington Post’s Ryan Reilly, recorded video of the officer who arrested him and with readers’ help, identified him as Ferguson Officer Justin Cosma. Aside from Belmar and Jackson, Cosma is the only police officer specifically named in the lawsuit.

Dwayne Matthews Jr., who lives in the Normandy School District, said he was not part of the protests but was walking to his mother’s house in Dellwood near the protests when he said he was beaten by officers and shot by rubber bullets.

“Eight officers in military suits ran up on me with assault rifles,” he said. “When I put my hands up and said, ‘Don’t shoot,’ they fired anyway, everywhere across my body.”

After Matthews was hit by the rubber bullets, he fell into a creek, where he said the officers tried to drown him and called him racial epithets, then assaulted him “as if they were doing a technique move from the WWE, on the concrete — my blood was everywhere,” he said.

“I have no feeling in my left hand still to this day,” Matthews added. “My life was very threatened.”

Backup officers were sent by nearly every municipality in the county, adjoining counties’ sheriff’s departments and the city of St. Louis to help police the protests in the weeks following Brown’s death, but most of the officers on the scene were from the St. Louis County Police Department, which had operational control of the protest response until Gov. Jay Nixon put the Missouri State Highway Patrol, or MSHP, in charge Aug. 14.

Matthews said he did not know which police department the officers who assaulted him were from, since they all looked identical in their riot gear. Police officers at the protests also did not wear name badges.

The lawsuit’s plaintiffs said they were all beaten or arrested in those initial days, before operational command was taken away from the county. Shabazz said he might add plaintiffs to the lawsuit and is still examining the MSHP’s later response to protesters, which involved many of the same crowd-control tactics the county used — which Shabazz contended were unconstitutional.

County Executive Charlie Dooley declined to discuss the Black Lawyers for Justice lawsuit with the Call Tuesday because he had not yet seen the lawsuit. Instead, he deferred questions to County Counselor Pat Redington.

County Police chief’s aide Sgt. Colby Dolly also deferred questions about the lawsuit to Redington, who said Friday that the county has not yet been served with the lawsuit, so she could not directly discuss its allegations.

The budget of St. Louis County this year is $600 million, and the budget for county police is roughly $100 million — however, Shabazz said that when police departments get “out of control” with their citizens, they deserve to go bankrupt. Shabazz lives in Washington, D.C., where Black Lawyers for Justice is based.

“If they won’t police the people right, then we have to bankrupt them,” Shabazz said. “If they won’t conduct their actions right here in this city, this county and the city of Ferguson, then they have to be taught a painful economic lesson.”

Giving the Call an update on an unrelated lawsuit the county is facing, Redington said that the trash-hauling lawsuit is in the appeals process, with no timeline on when it will be resolved. The Missouri Supreme Court found the county liable for not notifying trash haulers that it was creating trash districts in 2008, and a $5.9 million judgment awarded last fall to three trash haulers now tops $6 million after gaining interest daily.