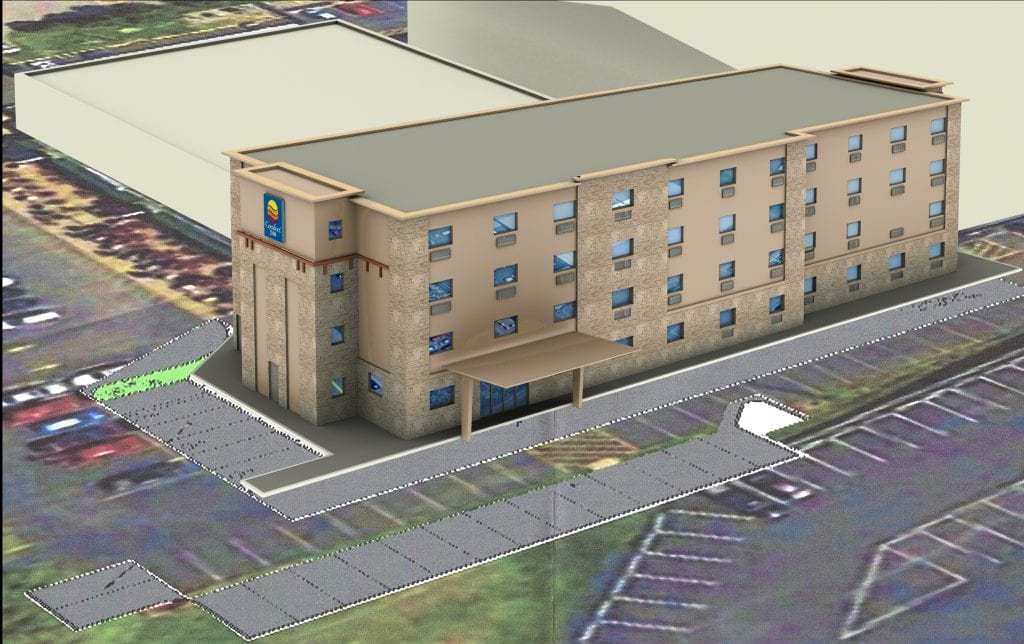 A rendering of the Comfort Suites being built by Days Inn owner HR Sheevam.

A plan to rebuild an aging Sunset Hills hotel has met resistance in the past from the Board of Aldermen, but the owner is trying again with a downsized proposal.
The Planning and Zoning Commission voted unanimously last week to recommend the Board of Aldermen approve a plan to tear down the Days Inn at 3654 S. Lindbergh Blvd. and build a new Comfort Suites hotel.
Days Inn owner HR Sheevam has changed the plan to reduce the hotel footprint and add more parking spots, a chief concern of aldermen who believe that hotel neighbor Helen Fitzgerald’s, which leases from Sheevam, already has far fewer parking spots than it needs.
Sheevam still plans to demolish two of the five existing hotel buildings and replace the hotel facing South Lindbergh Boulevard with a new, more modern Comfort Suites.
Under the new plans, Sheevam will demolish one of the back hotel buildings to make way for more parking.
Although the developer contends that the hotel has a smaller footprint than his previous plan, the city limits how much of a building can take up a site to 30 percent.
Since the new hotel will take up 33 percent of the Days Inn site, Sheevam filed for a variance last week that will be considered by the Board of Adjustment Sept. 28.
“We’re still at square one still,” Sterman said before the planning panel recommended the new plan. “He’s entitled to ask for a variance for that to the Board of Adjustment, but the question is does that constitute a hardship by the letter of the law for a variance? That’s something that we’ll have to do some analysis of.”
When Sheevam first brought the plan to the city a year ago, he promised that another back building would be demolished if a retail project came through in the next three years. Now he promises that it will be demolished even if he does not secure a new development.
A study commissioned by aldermen in January found that a new hotel would be a good fit for the Days Inn site, as long as aldermen carefully reviewed parking and require cross-access to the shopping center next door with Toys R Us, the Shoppes at Sunset Hills, to allow better movement between the two sites.
Before the study results came back in March, the board rejected Sheevam’s plan Feb. 28 3-2, with board President Richard Gau and Ward 4 Aldermen Thompson Price and Mark Colombo opposed.
Voting in favor were Ward 2 Aldermen Tom Musich and Steve Bersche.
Three aldermen were absent: Ward 1 Alderman Dee Baebler, Ward 3 Alderman Kurt Krueger and then-Ward 3 Alderman Keith Kostial.