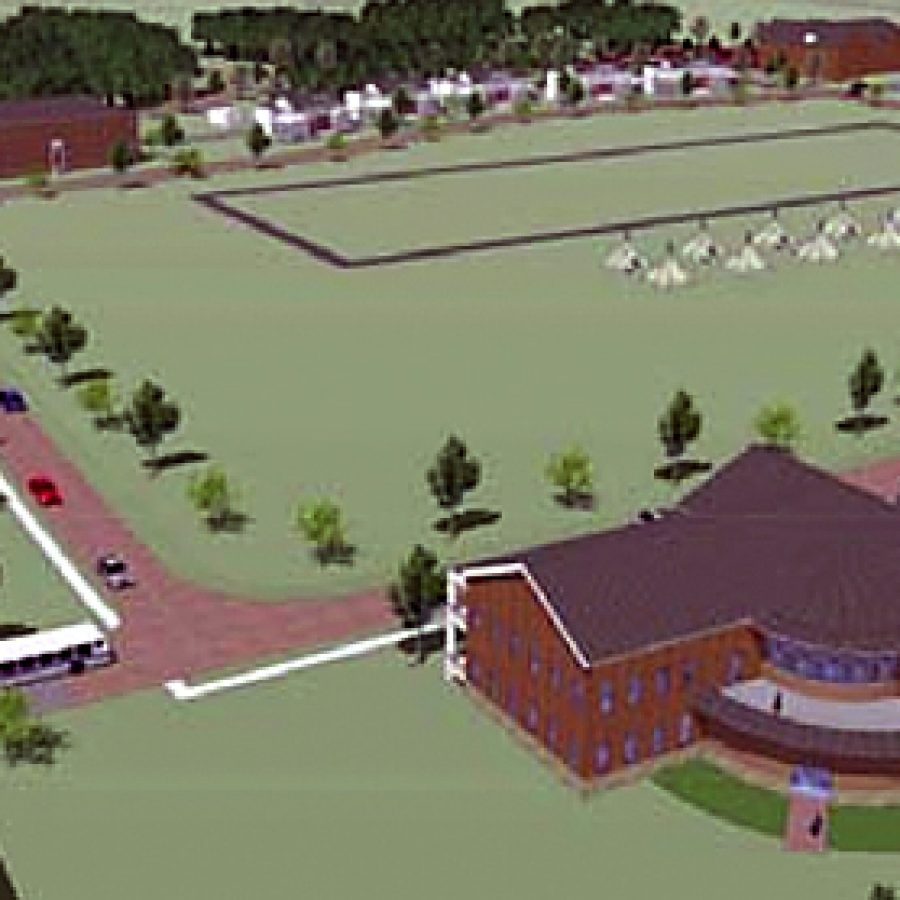 The Jefferson Barracks master plan calls for a new \"museum district\" with, among other features, an interpretive center foreground and a Ulysses S. Grant presidential library and museum.

A potential multimillion-dollar investment into a south county treasure could transform it into a major tourist attraction by its 200th anniversary.

The plan, prepared by Ohio-based design firm Woolpert Inc. over the past year, sets a 2026 completion date for the revamped complex, currently home to a National Guard base, the Veterans Affairs Medical Center, Jefferson Barracks National Cemetery and two county parks.

“This is a story that has not yet been told,” County Executive Charlie Dooley said during an open house for the master plan last week. “It is our job to tell the story about this military installation.”

Jefferson Barracks opened in 1826 and served chiefly as a U.S. Army induction, training and weapons storage facility, housing thousands of soldiers until it was decommissioned as a federal military post in 1946 following the end of World War II.

 A Ulysses S. Grant presidential library and museum, which would be the first such establishment for the 18th U.S. president.

 A new interpretive center designed to tell the entire history of the Jefferson Barracks complex.

 Reconstruction of the duplexes that served as officers’ quarters to provide for small museums, shops and cafes along the parade grounds.

 A Lemay aquatic and community center at the northern end of Jefferson Barracks County Park.

 Reconstruction and renovation of the nurses’ quarters for a possible bed-and-breakfast.

 An interpretive structure commemorating the trolley system that once shuttled soldiers from downtown St. Louis to Jefferson Barracks.

 Expansion of Sheridan Road to better accommodate funeral processions into the cemetery.

 Enhancements to the Mississippi River overlook, along with new displays and monuments.

 Additional signage and other improvements at the complex’s major entrances, including that of the cemetery.

The plan is designed to complement upgrades already in the works throughout the complex. One such effort is a $200 million to $300 million construction and renovation project at the medical center, which will result in the demolition of 14 sub-standard buildings and the construction of five new ones.

Other separate projects include a new, $25 million Armed Forces Reserved Center; a Missouri Civil War Museum and Jefferson Barracks Heritage Foundation Citizen Soldier Museum; a Fisher House on the medical center grounds to provide temporary housing for hospital patients’ families; and the conveyance of 30 acres to the cemetery from the medical center.

“Jefferson Barracks is so many things to so many people,” said 6th District Councilman Steve Stenger, D-south county. “The improvements in this master plan will not only enhance the area and make it more accessible to our local residents, but it will make it a place where people from all over want to visit.”

Woolpert officials said the project could create up to 500 construction jobs, more than 300 permanent jobs and, once completed in 2026, draw 180,000 to 250,000 new visitors to the complex annually.

The master plan notes that finding funding for the $68 million effort may prove challenging because of the “public ownership nature” of Jefferson Barracks.

However, it suggests a number of funding mechanisms, such as historic tax credits, tax-increment financing, a special district — similar to the St. Louis Zoo and Museum District — and other public and private funding options.

Dooley stressed that the Jefferson Bar-racks master plan was open for community discussion and debate.

“Understand this,” he told the crowd at last week’s open house. “It’s just a plan. It’s flexible. It’s fluid. It can change over the next 20 years. We’re not going to do this all in one year. It’s a 20-year plan, it’s going to be done in phases and we’ll do it together with your input.

“We’re not going to do this alone, and that’s the most important part about this. You’re going to be connected to this as well. My friends, we have an opportunity to make St. Louis County better than it’s ever been before.”

View the plan in its entirety below.