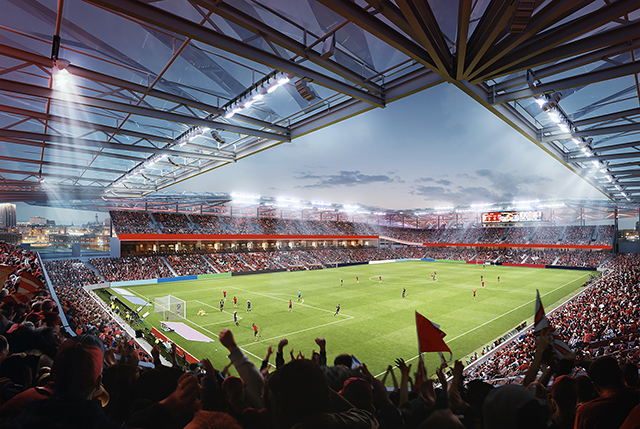 Every seat in the stadium will be within 120 feet of the pitch, the closest of any MLS stadium. The closest seats will sit just 20 feet from the touchline. Rendering courtesy of MLS4THELOU.com.

Supporters of bringing a Major League Soccer team to St. Louis are hopeful it will actually happen after the MLS decided April 18 to expand to 30 teams, all but assuring that St. Louis will be awarded a franchise. If the city is awarded a franchise, the stadium will be ready for MLS play in March 2022 for the season home opener.

The stadium is a proposed 22,500 to 25,500-seat stadium that would be built beside Union Station in downtown St. Louis, pending the award of a franchise by Major League Soccer. The field will sit 40 feet below street level and every seat will be within 120 feet of the pitch, the closest of any stadium in the MLS, according to the MLS4THELOU website.