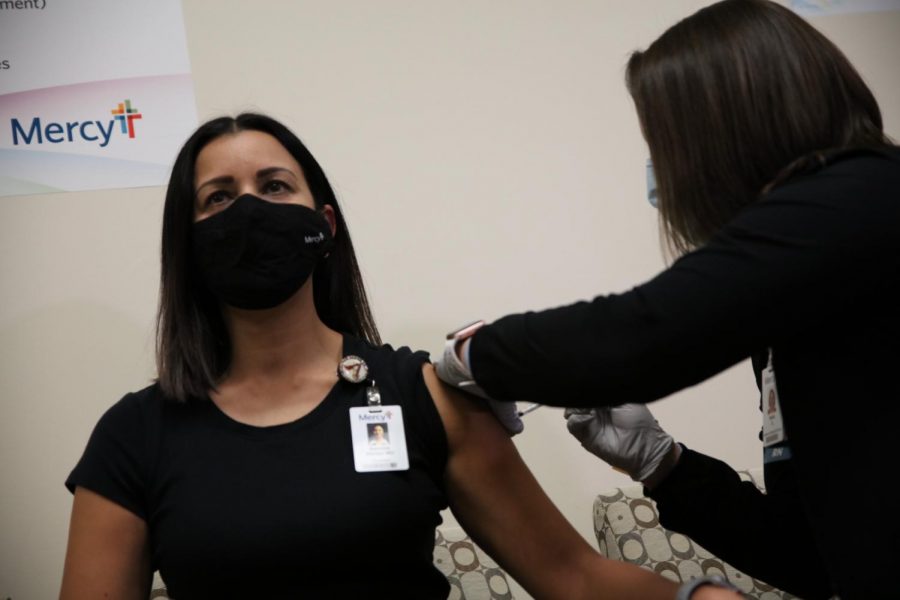 Dr. Aamina Akhtar, infectious disease physician and chief medical officer at Mercy Hospital South, gets the first COVID-19 vaccine in the St. Louis region Monday, Dec. 14, 2020. 'This is a game changer,' Akhtar said of the vaccine.

The first doses of the coronavirus vaccine in the state and St. Louis region were administered to hospital workers Monday in South County, giving frontline health-care workers hope as patients from the COVID-19 pandemic overwhelm local hospitals.

The first five health-care workers to get the vaccine in St. Louis were from Mercy Hospital South, with reporters watching as they received the Pfizer-BioNTech vaccine that was partially produced in St. Louis. It is the first of three vaccines expected to receive approval internationally and by the U.S. Food and Drug Administration. Along with a group of health-care workers in Kansas City, the Mercy staffers were the first in Missouri to receive the vaccine.

Like the second vaccine from Moderna, clinical trials — conducted partly with participants in St. Louis — showed that the Pfizer vaccine was nearly 95-percent effective against the coronavirus.

Health-care workers lining up to be the first to receive the shot Monday said they are hopeful that the vaccine marks a turning point in the pandemic that has overwhelmed their lives, not just their hospital, as they have worried about spreading the virus to their families.

The vaccine promises to end a pandemic that has stopped normal life for most people around the world since March. In all those months, however, health-care workers have been the hardest hit, struggling to take care of patients who have come to them in waves while worrying if they or their families will get the virus.

Hospitalizations across St. Louis are down from the record highs seen around Thanksgiving that threatened to overwhelm hospitals, but the number of patients being admitted is still more than twice what hospitals say they can sustainably handle. Local health leaders expect the current surge of cases to continue into January. Widespread immunity from the vaccine might not be seen until late spring or summer.

The vaccine is a “game changer that gets us out of it, so it’s a big moment for everybody here,” Mercy South Chief Medical Officer Dr. Aamina Akhtar said just after she was injected, raising her hands in victory while workers waiting in line to get the vaccine applauded.

Most frontline workers will need little convincing to roll up their sleeves, Akhtar said, making an analogy that any St. Louis sports fan will understand.

“The atmosphere in the hospital feels like a Cardinal baseball game — it is excitement, we’re ready to go, people are lined up talking about it,” Akhtar said. “And so we want to get it started because this is the first step in ending this pandemic.”

Mercy Hospital South is the hospital that has the most COVID-19 patients by bed capacity among all Mercy’s hospitals, and potentially all hospitals in the St. Louis region, Akhtar told The Call earlier this month. The hospital has struggled to cope with a surge of patients over the last six weeks. Although hospitalizations may have plateaued in the last several days, they are still at levels that would have been record-setting two months ago.

Akhtar was the first person to get the vaccine in the St. Louis region and is encouraging all of Mercy’s employees to follow her lead. The hospital system is not requiring the vaccine, but is strongly suggesting that all employees receive it. In the weeks and months to come, the vaccine will be offered to nursing-home residents and staffers, first responders, teachers, child care providers, older and at-risk adults, children and finally, healthy adults.

Other hospital systems in St. Louis are receiving shipments of the vaccine soon. SSM Health has requested 9,700 doses starting with a shipment early next week, but it is not sure if it will receive that many, said spokeswoman Stephanie Zoller Mueller. Shots will be given out on a tiered basis with frontline, at-risk workers set to receive the vaccine first. SSM employees will not be required to get the vaccine, but will be asked if they are interested and tiered under the guidance from the Centers for Disease Control.

The vaccine was fast-tracked in a way no vaccine ever has been before, but Akhtar assured the public that it is safe as shown through clinical trials.

When a reporter asked her what it was like to be a “guinea pig,” Akhtar said, “You know what, there’s no guinea pig — it’s a very efficacious, very safe vaccine. I’m just honored and privileged to be representing Mercy South and to be one of the first ones vaccinated here.”

The hospital chose health-care workers from diverse jobs and backgrounds to show that everyone should get the vaccine.

The vaccine is given in two doses, three weeks apart, and has to be kept in deep-cold temperatures.

Registered nurse Benjamin Ojie, who works on a COVID-19 floor, said, “I do this for my wife, my kids and my floor, 5 West and 5 East — they’re my family.”

Nicole Boyer, a registered nurse in the ICU in a wing that has been switched over to a COVID unit, didn’t know she was going to get the vaccine that day but was approached in the morning by a manager who asked her if she would like to receive it.

After nearly a year treating patients who are extremely sick with COVID-19 in the ICU, she was ready to do all she could to prevent its spread, even with no notice.

“I was very excited about it, I’ve been waiting for this,” Boyer said, noting she was “hopeful” about the prospect of ending the pandemic.

“We can finally see a light at the end of the tunnel,” she said. “It’s been a rough ride.”

The other recipients among the first five were Father Bill Cody, a chaplain who said he got the vaccine for his patients, and respiratory therapist Jeannine Celestine.

Mercy South President Sean Hogan was on hand to see the first vaccines given at the South County hospital.

“It is kind of a historic day, that’s how it feels like for everybody around here. It’s a long time coming, even though it’s really a short time for a vaccine,” said Hogan. “We have that end in sight.”

A lot of work went on behind the scenes to make the vaccine available within days after emergency FDA approval was granted Friday, including extensive coordination with the state, said Hogan.

Akhtar said that everyone should educate themselves on the vaccine, but fought back against those who say they won’t get vaccinated or have publicized adverse reaction events among the first vaccine recipients in the U.K.

Overall, vaccines that have been through clinical trials are “one of the safest things that we can do for ourselves,” Akhtar noted, protecting against illnesses that are worse than any possible side effects.  Those who have had adverse events in the U.K. have primarily been from high-risk groups or those already prone to getting allergic reactions to shots.

“When they look at high risk for getting COVID and having long term health consequences, that risk is higher than anything that the vaccine could present,” said Akhtar, an infectious disease specialist.