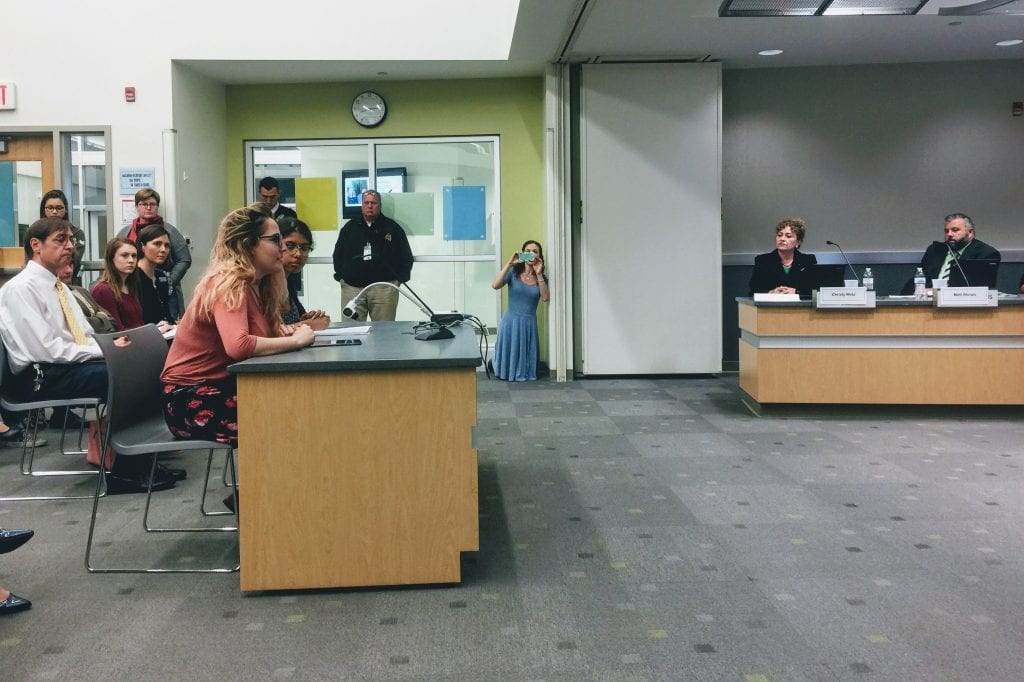 A Lindbergh High School student speaks to the new Board of Education, including members Christy Watz and Matt Alonzo, right, at their first meeting about the student's experience in ThriVE Best Choice in middle school. Photo by Gloria Lloyd.

A representative of a group opposed to Lindbergh Schools’ use of ThriVe St. Louis’ Best Choice Program last week presented a petition signed by 540 district residents urging the Board of Education to remove the sex education program from the district.
The petition also calls for district officials to replace the Best Choice Program with “a comprehensive sex education curriculum.”
However, Lindbergh currently is in the process of reviewing the district’s health curriculum, including the sex education program.
The curriculum review is not being done in response to concerns voiced by the Lindbergh Parents for Comprehensive Sexual Education, but is part of the district’s regular cycle of curriculum review, according to Superintendent Jim Simpson.
ThriVe Best Choice has presented a school-based abstinence curriculum for students in grades six through eight for the past nine years at no cost to the district.
District officials had never received a complaint about the program until last December, when resident Caleb Friz voiced his concerns to the school board that ThriVe is a Christian organization.

“… According to the Pew Research Center, 77 percent of adults in Missouri identify as Christians,” he told the board in December. “I am here to represent the other 23 percent, and I have a simple question for you: Do we belong in your school district? Do our children belong in your school district? Because it doesn’t feel like it.
“When you’re teaching abstinence-only until marriage, there’s no scientific reason for that. That’s a religious value that I understand a lot of people hold, but I don’t want that taught in a public school to my children, to my boy, my girl …”
Since then, Friz and other representatives of Lindbergh Parents for Comprehensive Sexual Education have addressed the board on nearly a monthly basis voicing their concerns about Best Choice and urging the board to remove the program.
District officials say Best Choice does not include any religious content, and that under state law, public school districts that offer sexual education classes are required to ensure that any course materials and instruction relating to human sexuality and sexually transmitted diseases will be medically and factually accurate. In addition, they are required to “present abstinence from sexual activity as the preferred choice of behavior in relation to all sexual activity for unmarried pupils because it is the only method that is 100 percent effective in preventing pregnancy …”
Friz presented the petition signed by 540 residents to the board Oct. 10.
Besides calling for the Best Choice Program to be replaced, the petition urges the curriculum be:
Science and evidence-based, and medically accurate; created by medical professionals, certified educators and presented by Lindbergh educators; include factual information and efficacy about abstinence and contraceptives; explain the importance of consent and the responsibility of each individual in a sexual relationship; inclusive to LGBTQIA — lesbian, gay, bisexual, transgender, queer/questioning, intersex, and asexual/agender/aromantic — students; and strive to build confidence and awareness in students to avoid unwanted intimacy.
Another speaker at the Oct. 10 meeting, Vicki Beys Palmer, told the board that she and six other parents have filed a Protection of Pupil Rights Amendment complaint with the Family Compliance Office of the U.S. Department of Education.
“… After parents signed permission/opt-out forms to allow their students to attend the ThriVe Best Choice Program, they became aware of possible violations of state and federal law with regards to the curriculum and collection of sensitive sexual information, such as sexual history, pregnancy history and history of sexually transmitted diseases,” she told the board.
Besides Beys Palmer, the complaint was filed by her husband, James Palmer, Catherine and Michael Jochens, Kelly Hortiz Kress and John Kress and Joel K. Emery.
Beys Palmer said that pre- and post-surveys given for the program required students to provide “identifying information, including their first initial, last initial, date of birth, race/ethnicity and ZIP code …”
But Simpson disputed the validity of the complaint, noting that survey forms had been changed a year ago and no longer require students to list their first initial, last initial and date of birth.
“Their accusation that Lindbergh or ThriVe has broken laws having to do with student privacy is quite, quite debatable, and I think it’s an example of we have concerns over the sex ed program and here’s another tool we’re using to let you know about those concerns,” he said. “And I think it’s pushed towards ThriVe much more than it is Lindbergh.”
While students are no longer required to list their first initial, last initial and date of birth, the complaint states, “However, there remains enough identifying information — particularly for minority students — that the use of these surveys should be halted until proper procedures are established …”
But a representative of ThriVe, Joy Maxwell, said, “Anyone can file a complaint. It’s not a lawsuit. It doesn’t mean the arguments have merit. It just means someone is unhappy … It would be un-American to assume this complaint has any merit at this time. What I can say is the confidentiality of parents and their students is of paramount importance to ThriVe and Best Choice.”
ThriVe and Best Choice strictly adhere to all privacy laws and completed surveys are kept “under lock and key,” she added.
Another resident, Martha Duchild, directed some of her comments “toward those who would demand immediate action from the board regarding the district’s sex ed curriculum. In a civic setting, making demands on a governing body crosses the line from advocacy to bullying …”
The feedback provided by representatives of Lindbergh Parents for Comprehensive Sexual Education “has been valuable. The administration and board have listened to your suggestions, met with your representatives and provided you with a time line for curriculum implementation,” she said. “By demanding immediate implementation of your goals, you are depriving the board of its agency. In attempting to circumvent established curriculum development procedures, you have necessarily placed your own interests above all others that are in equal need of attention. In short, you would be violating the very principle you would like to see our students follow …”