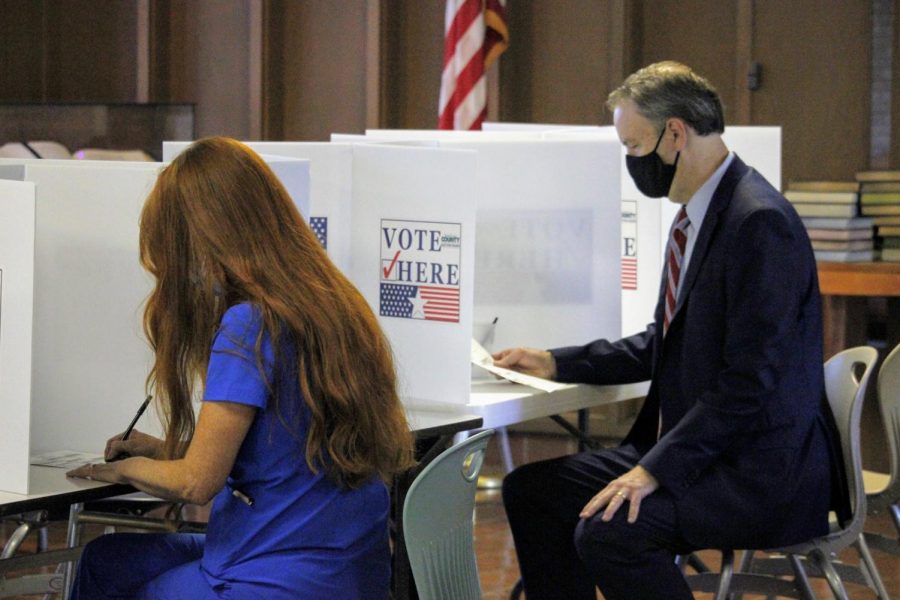 St. Louis County Executive Sam Page, right, and his wife, Jennifer, head to the polls in August 2020 in Creve Coeur to vote for Page in the Democratic primary. Jennifer Page was dressed in scrubs to head to her job at Mercy Hospital South.

A St. Louis County judge on Tuesday dismissed a lawsuit contesting the November general election filed by Paul Berry III, the Republican who lost the race for county executive to Democratic incumbent Sam Page. Representing himself, Berry had asked for the election to be overturned and a new election be held.

County Circuit Judge David Vincent dismissed the lawsuit with prejudice, which means it cannot be refiled, and is requiring Berry to pay court costs.

In the ruling, Vincent wrote, “… [T]his Court is not firmly convinced that the alleged irregularities affected the outcome of the 2020 General Election and therefore Contestee Sam Page’s motion to dismiss is granted and sustained.  Contestant Paul Berry, III’s first amended petition is dismissed with prejudice at Contestant’s costs.”

In the lawsuit filed Dec. 17, after the election results were already certified by the St. Louis County Board of Elections, Berry said that election “irregularities” were “of sufficient magnitude to cast doubt on the validity of the 2020 St. Louis County Executive General Election” and the election board’s certified results. The lawsuit was one of a number of lawsuits Berry has been a part of over the last year, according to court records.

Vincent wrote in his ruling about Berry, “There is nothing in his allegations that would call into doubt the accuracy of the results of the 2020 General Election.”

Page filed a motion to dismiss Dec. 23, which Vincent granted Tuesday after a videoconferenced hearing Jan. 7.  Page was represented by attorneys Matthew B. Vianello and Bradley Ketcher.

Vincent said Berry didn’t provide any evidence that the issues he pointed out could have affected the outcome of the election if they were true.

Berry alleged that the election board disenfranchised voters by holding the election under a state statute on mail-in voting that is in conflict with the Missouri Constitution. He objected to St. Louis County taking mail-in ballots in different ways than usual due to the COVID-19 pandemic, but Vincent pointed out that this was approved by the Missouri Legislature and signed into law by Gov. Mike Parson. The decision was found constitutional by the Missouri Supreme Court in a lawsuit filed by the NAACP and the League of Women Voters.

Berry also alleged in his now-dismissed lawsuit that all the votes should be thrown out because when the election board certified the results, it didn’t separate votes cast as absentee or in-person. Vincent said that he didn’t see how the “alleged technical failure” to identify how voters cast their ballots would have affected the election outcome.

“Nothing in the statute, based on this allegation, renders the election void,” Vincent said in the ruling. “Also, this allegation should not be able to frustrate St. Louis County voters’ rights to have their ballots counted.”

In the initial suit, Berry alleged that the decision to allow voters to vote at any precinct was illegal, and said election authorities did not provide for secret ballots.

But Vincent said it was “speculative” that any voter could have seen another voter’s ballot and, because Berry provided no evidence that even if it happened it would have affected the outcome of the election, didn’t merit throwing out hundreds of thousands of votes.

Read the initial lawsuit and Vincent’s motion to dismiss below:

Berry lawsuit asking for vote to be overturned