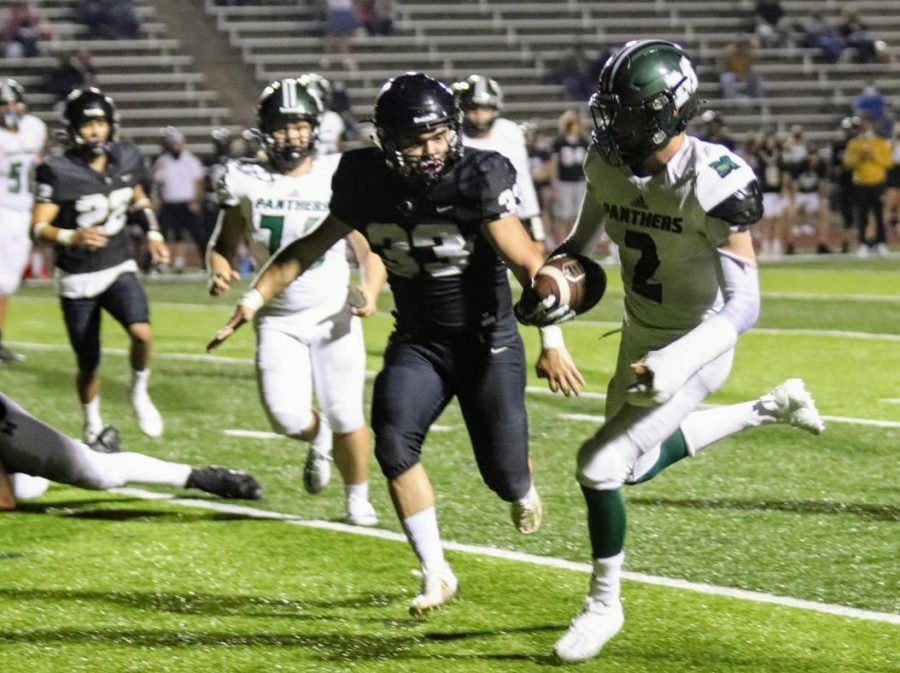 Above, Mehlville’s Eric Ohmer (No. 2) scores the winning touchdown with less than two minutes to go in the Oct. 9 game, flanked by Dino Pajazetovic (No. 33) of Oakville.

For the first time since the long-delayed fall football season started Oct. 9, Mehlville hosted a home football game Oct. 16 — but the Panthers suffered a 54-17 setback to Eureka under the glow of Friday night lights.

“We knew that we were going to have our hands full with Eureka going into the game,” Mehlville head coach Kent Heinemann said. “We had some injuries that we knew were going to be challenges for us, but I was happy with the fight that our kids put out Friday night. Eureka is a good team, and you cannot go out there and make the mistakes that we made and expect to be successful against a team like Eureka.”

The loss for the Panthers (1-1) marked back-to-back defeats at home since Mehlville dropped a 23-10 decision to Vianney at its last home game Nov. 8, 2019 in the Missouri Class 5 district semi- final game. Eureka (2-1) jumped to a 6-0 lead with 4:51 left in the first quarter after Carson Smith intercepted a pass by Mehlville’s Izayah Hannam-Lewis and ran it back 26 yards for a touchdown.

The Panthers responded with just 45 seconds to play in the first quarter as Genti Dullovi booted a 25-yard field goal to trim the Wildcats’ lead to 6-3.

“He’s so solid in that he doesn’t get nervous,” Heinemann said of Dullovi. “He goes out there and does his thing, and we feel pretty confident in him on anything inside the 35-yard line.”

Eureka reeled off 28 unanswered points to take a commanding 33-3 lead with just minutes to play in the first half of the game.

Mehlville’s Eric Ohmer gave the Panthers their first touchdown of the game as he flew down the field on a 90-yard kickoff return to trim Eureka’s lead to 33-10 after Dullovi’s extra point.

“Eric is just a competitor in that he just never leaves the field,” Heinemann said. “Right now he’s our biggest weapon on the field. He’s got great speed and instincts out on the field, and he’s the guy that we are calling on right now.”

Eureka extended its lead to 40-10 after a 16-yard touchdown pass from Smith to Andrew Xenakis with 54 seconds to play in the first half. Nate Campbell booted the extra point.

“Cooper had another solid night for us,” Heinemann said. “He’s playing banged up for us, but he’s still playing solid.”

The Panthers are back in action Friday, Oct. 23, as they host Webster Groves.