High-octane offense by Chaminade proves too much for football Panthers 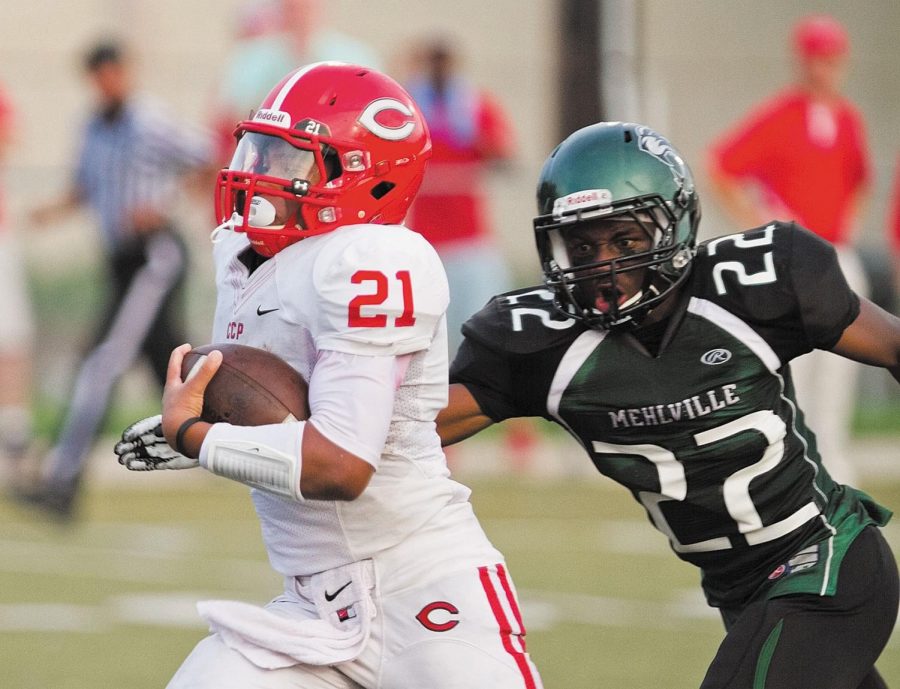 High heat, high humidity and a high-octane Chaminade offense were just too much to overcome for the Mehlville Senior High School varsity football team Friday night.

In the Panthers’ season opener, they lost decisively to the Red Devils, 50-7.

Chaminade was all over the scoreboard, while Mehlville’s Mike Mik scored the team’s lone touchdown late in the first quarter on a 90-yard kickoff return to bring the Panthers back to within seven points.

Things fell apart after that.

Mehlville head coach Kent Heinemann said he knows his players can perform better than they did.

“I think we are a better team than we displayed,” he told the Call. “I don’t think that game was representative of what we have to come in the next couple of weeks. Our kids didn’t do real well with the heat.

“It was obviously some heat that we are not accustomed to seeing having such a mild summer, not to make an excuse, but we just were very flat and we have to do a better job of getting our kids prepared. I think that was a pretty good Chaminade team, also.”

Heinemann said his team might not have been quite ready for the first game of the 2014 season, but after seeing the Panthers play their first game — not just scrimmages and jamborees — he saw some things he can fix.

“We’re not in the shape we need to be in,” he said. “We are a little behind on that and that’s something I knew going into Friday.

“I think we have the right kids out there. I just think they’re just not quite there yet, and I’m pretty confident that we’re going to get them there.

“I’m pretty confident that they’ll bounce back. We get another good opponent (this) week in Ritenour and … we’re not going to see another Friday night 100-degree humidity for the entire game. And I don’t think that was representative of Mehlville football,” Heinemann added.

The Panthers will no doubt be in for some grueling practice sessions this week in an effort to get themselves ready and avoid losing another game by such a large margin.

“We’re just going to clean up the mistakes that we made Friday … We’ve got to be a little more physical. Those are things we can fix in practice,” Heinemann said. “We had a couple mistakes early on … We didn’t see anything that can’t be fixed in practice.

Mehlville fans who instantly become pessimistic after such a loss should remember the season is only one-tenth of the way over, the coach noted.

“Our goal is weeks one through nine, we put ourselves in a good position for week 10, so we can continue on, and obviously that goal can still be accomplished,” Heinemann said.