School board slated to vote March 9 on new boundaries 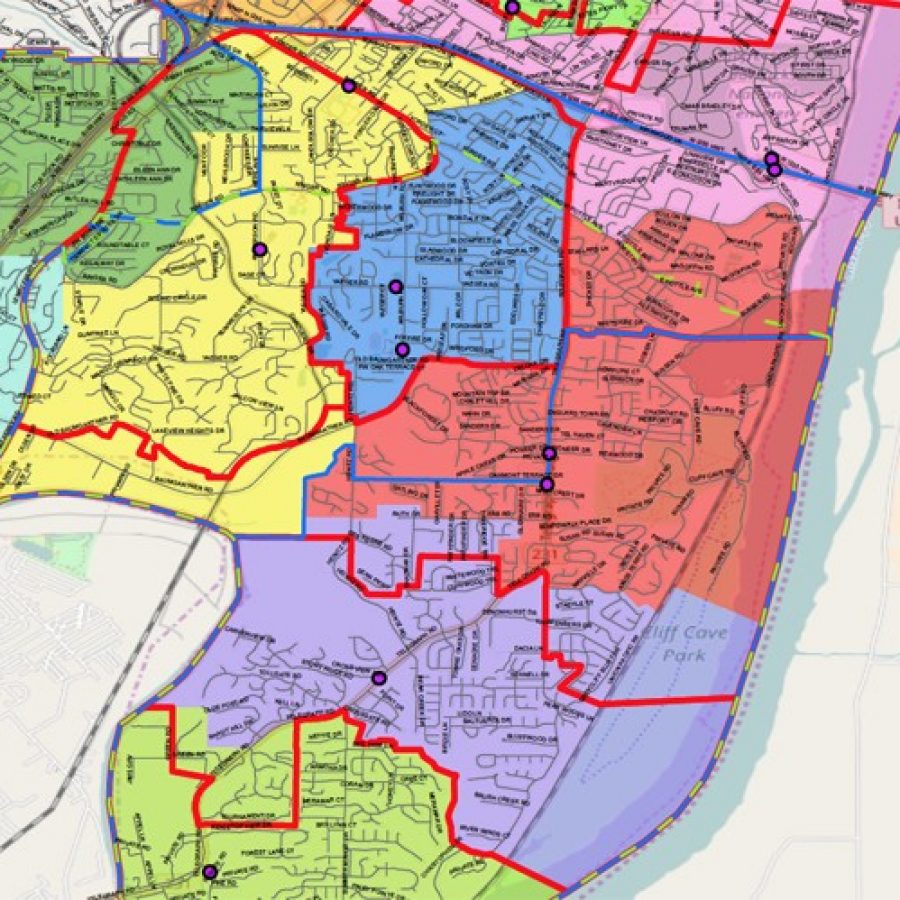 A close-up of elementary scenario A for Oakville schools, above.

However, no buses will be provided for those students at this point, and siblings of grandfathered students would have to apply for school choice.

The committee’s recommendation was made during a two-hour meeting Feb. 21 at Trautwein Elementary School.

Mehlville’s first major redistricting in 14 years is spurred by lopsided enrollment that has classes jammed into hallways at some schools and empty classrooms in others.

Public-input sessions on the redistricting scenarios were set Monday and Tuesday — after the Call went to press. An online survey to obtain feedback on the scenarios was set to close Wednesday, March 1.

As proposed, the Redistricting Committee will finalize its recommendation by Monday, March 6, with the goal of releasing the proposal the afternoon of Tuesday, March 7.

In early February, the district released two possible scenarios for redistricting — Scenario A and Scenario B.

But Superintendent Chris Gaines told the Call he doesn’t believe the final recommendation will be one of those scenarios.

All told, Gaines said he believes the actual percentage of students being moved through redistricting could be less than 10 percent.

On March 7, Board of Education members will hear residents’ comments regarding redistricting during a board listening session scheduled for 6:30 p.m. at Washington Middle School, 5165 Ambs Road.

“Well, we figure redistricting is going to be the hot topic, so we’re going to have like two rooms of redistricting and one room of something else, like miscellaneous questions,” Gaines said.

The Board of Education is scheduled to vote on the redistricting recommendation when it meets at 6:30 p.m. Thursday, March 9.

During the Feb. 21 Redistricting Committee, Maus and Roberts told committee members that they had discussed the issue of grandfathering with Gaines.

“So we talked to him and let’s say if we would grandfather every single kid, it would take us about 11 years to have an effect,” Maus said.

Maus noted the core issue of redistricting has been elementary overcrowding throughout the district.

“So if we want to have an impact on our core issue, we need to move elementary kids,” she said. “So really, grandfathering every kid in the district is not going to help us.”

Committee members discussed allowing fifth-graders to remain at their elementary schools, but decided not to recommend that option, as two schools — Bierbaum and Oakville — likely would exceed their comfortable capacity.

With elementary overcrowding the core issue, Maus noted that during the discussion with Gaines, the issue was raised about what purpose it would serve to move incoming eighth-graders and high school students “when we’re not over capacity” at those schools.

For the district’s middle schools, grandfathering incoming eighth-graders would not have that much of an impact, Maus told the committee.

“I think that the community is asking for that grandfathering …,” she said.

Roberts later said considering grandfathering shows the committee is listening to the community’s feedback on redistricting.

“… We are listening to your feedback. We’re trying to make what’s best for 10,000-plus students, so if we’re able to do it, I think we can bend a little bit to make this a smooth transition on families and on students,” she said.

“Kids are resilient. Yeah, sometimes moving kids is difficult, but they’re resilient. They’ll survive,” he said. “If we’re going to think about grandfathering any kids, what makes most sense is we’re talking about high school kids …”

He later said, “If we did high school, just from a standpoint of how we service our kids and what we offer, the high schools are the most unique in that whole team, team sports, all those things. So from that perspective, it makes the most sense if you’re going to grandfather anybody to do it with the high school …”

No committee members voiced any opposition to grandfathering current high school freshmen, sophomores and juniors with no transportation at this point.

Committee members continued to discuss grandfathering other students before ultimately deciding to grandfather incoming eighth-graders with no transportation at this point.