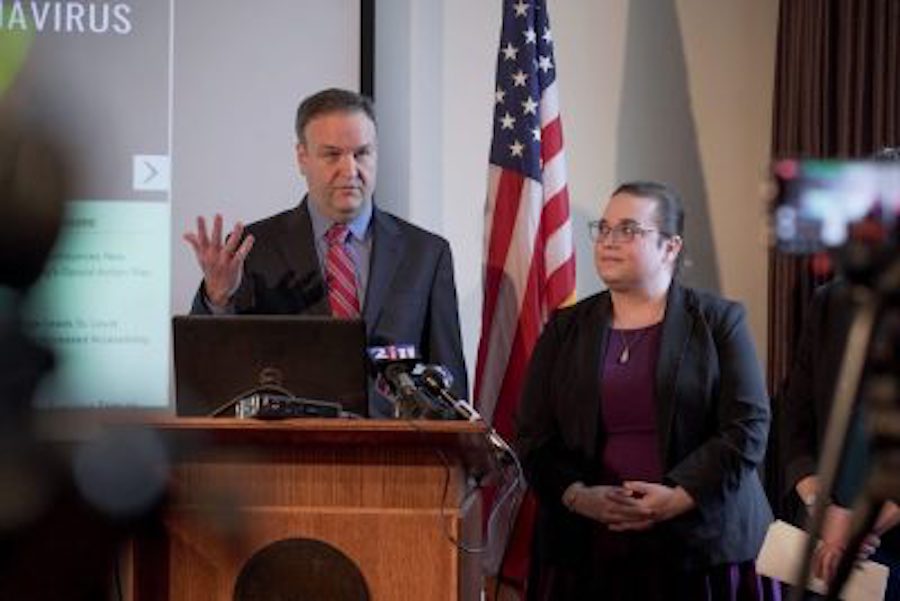 St. Louis County Executive Sam Page said Thursday that he will make a series of announcements Friday morning on new COVID-19 restrictions he will issue in response to the rising number of COVID-19 cases.
“I am deeply concerned that not everyone is taking personal responsibility in following public health orders,” Page said in a statement. “Our hospitals are filling up, our health workers are overwhelmed and exhausted and we continue to break records daily in the number of new cases and in the number of patients our hospitals are tending to. Everybody needs to be all-in if we are going to get control of this virus.”

Page had said Monday that he would give area residents a “week or two” to bring case numbers down before he would take action. But as the St. Louis Metropolitan Pandemic Task Force comprised of area hospital systems has released numbers each day this week that have broken records in case counts and hospitalizations, Page is moving sooner.

“Within a week or two, if this curve does not plateau, or at least bend, we are going to have to do things differently,” Page said.

As St. Louis County has seen cases spike, Missouri has also hit record highs. Over the past seven days, the state has reported 24,255 new COVID-19 cases, more than 11 percent of all cases since the first was reported in March.

But on Monday, Page said that any new restrictions in the county will be gradual, Page said. That is also the route he took when he initially issued a stay-at-home order March 20 that lasted through May 18.

“Whatever we do moving forward will be measured and will be based on what we think will have the best effect,” Page said.

The last time Page issued a major change in restrictions was in late July, as he shut down late-night bars and took restaurants down to 25-percent capacity from 50-percent capacity. At that time, he said he took the step because daily hospitalization numbers crossed the line to 40, marking the time when numbers started to become unsustainable for hospital capacity. At one point, that daily hospitalization number dropped to the 20s.

But the numbers seen in the last few weeks have made officials long for that 40 number, as hospitalizations have hit record highs and hospitals like Mercy Hospital South have reported that they are at or near capacity and struggling with staff shortages. Hospitals in the St. Louis region reported 109 new COVID-19 admissions Thursday, in data that lags two days. That was down from a record of 120 new admissions Wednesday, but the seven-day moving average of new hospitalizations hit a new high of 101, up from 99. The seven-day moving average of total hospitalizations set a new high at 599, up from 572.

Since then, cases slowed but then spiked again due to gatherings surrounding Halloween, which the county had warned against. Infectious disease experts have warned since the spring that winter could be an even worse season for COVID-19 since it will coincide with flu season, which usually impacts hospitals even in a normal year. To encourage the flu shot, Page got his own flu shot live during a press conference in September.

The news that Pfizer’s vaccine that has been partially tested in St. Louis is 90 percent effective and has no significant safety issues is good news, but inoculations for the general public are months away, Page said.

“People definitely have COVID fatigue and they want to be done with it, but doing away with these restrictions will not make us be done with it,” the county executive said.