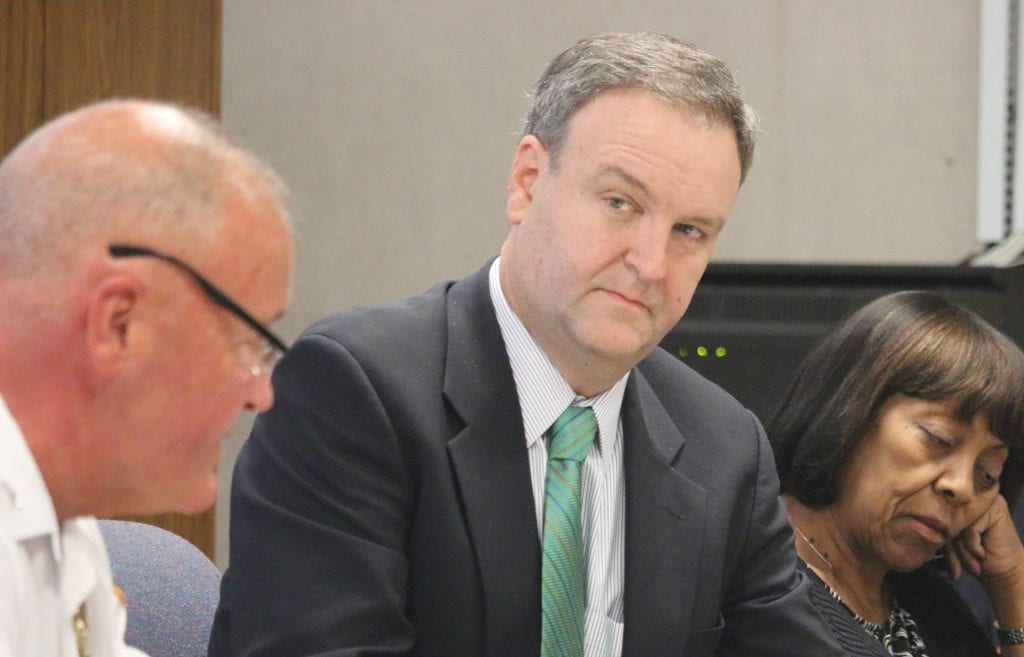 A link between campaign donors and county contracts just brought down the administration of former County Executive Steve Stenger, and his successor promised that won’t happen to him.

New County Executive Sam Page said he would look for ways in the next few weeks to legislate barriers to county officials working in exchange for campaign contributions.

Asked last week if in light of Stenger possibly going to prison for pay-to-play, Page would make a pledge that he would not take campaign contributions from developers or companies with projects with the county, the new county executive declined to make that promise outright.

“I can tell you that I will not make decisions as county executive based on campaign contributions, and I’ll work very hard to separate contributions from decisionmaking in time, especially, but it’s very hard to tell someone that they can’t participate in the political process, that they can’t contribute. So I have to review our ability under state, federal and local law to put boundaries on this,” Page said. “But I can tell you that I have never and will never take a contribution with the expectation of a vote that I would make or a decision I would make. I have never done that, I will never do that, and I will try and make sure that there’s no appearance of that.”

The now-disgraced Stenger always maintained that there was no link between his campaign contributions and county deals. His contributions were recorded publicly, he said, and the County Council had to approve any contracts.

“In my last report, I think I may have had in excess of 300 separate contributions from companies and individuals. These contributions have extended over years, years and years. I mean, it’s what we do in public life. You have to run for election, and people make contributions,” Stenger said in response to a question on his campaign donations from The Call in September 2014. “I think what you’ll find is the individuals that (a South County resident) mentioned and the companies that she mentioned have been giving to me for years, quite literally since I first began. Not for some type of political favor, but because they believe in me. And they believe in good government.”

But federal prosecutors were able to prove a link between Stenger’s decisions and donors because he and Rallo exchanged text messages in which Stenger directly asked for checks, and Rallo often replied asking how his county contract was going. Stenger demanded that St. Louis Economic Development Partnership CEO Sheila Sweeney go along with the deals.

Among Page’s past contributions, he took $5,000 in donations from the Glarner brothers, the owners of the former Northwest Plaza, The Crossings at Northwest, where Stenger opened a new North County Government Center in 2017. When the deal was passed in 2016, Page was a key backer of the project in his district, but he later said he was duped by Stenger into voting for the leases.

The Glarner brothers were Stenger’s top campaign donors, contributing nearly 10 percent of his $4 million in contributions in the election cycle leading up to the two county executive elections last year.

At least one of Page’s donors was specifically caught up in the five schemes that federal prosecutors used to take Stenger down.

John Bardgett, president of John Bardgett & Associates of Jefferson City, donated $500 to Page Aug. 3, 2016. The company is identified in the indictment only as “Company One.” In a conversation apparently recorded by the FBI, Stenger said of Bardgett, “guess what, he’s been the mother f—-in’ one of the biggest supporters of every county executive, including the person I was running against last time. He supports whoever’s in power.”

Speaking to his Chief of Staff Bill Miller, Stenger said to tell Sweeney that if she didn’t give the contract to Bardgett’s firm he would fire her because “this will f— everything in the world up…”

Page also received a $200 campaign contribution March 30 that year from Elkin Kistner, who has since been hired by Page and the council for several county lawsuits. Stenger declined to pay those legal bills, and at The Call’s press time it was unclear whether Page had paid them.