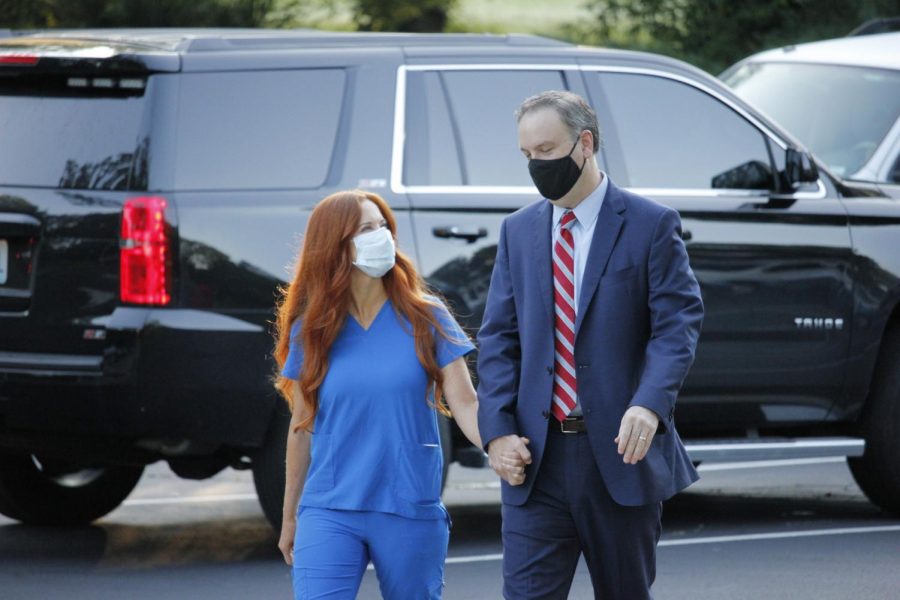 St. Louis County Executive Sam Page, right, and his wife, Jennifer, head to the polls Tuesday morning, Aug. 4, 2020, in Creve Coeur to vote for Page in the Democratic primary. Jennifer Page was dressed in scrubs to head to her job at Mercy Hospital South.

With 70,500 votes for 38 percent of the total vote, Page fended off well-funded challenges from businessman Mark Mantovani, who was narrowly edged by then-County Executive Steve Stenger in the Democratic primary two years ago, and county Assessor Jake Zimmerman. Mantovani earned 54,858 votes for 29.64 percent, just over half the 90,837 votes he received last time. Zimmerman, the assessor since 2011, took 45,326 votes for 24.49 percent. Lesser-known candidate Jamie Tolliver of University City had a lower profile but pulled 8 percent in the race.

Page, 55, was chairman of the County Council that voted him county executive in April 2019, when Stenger resigned in disgrace just days before he pleaded guilty to federal corruption charges. Elected in the same primary two years ago, Stenger is now serving a federal prison sentence in South Dakota. This week’s election was county voters’ first chance to weigh in on the council’s decision and potentially take the reigns away from Page for the remaining two years of Stenger’s term.

Page instituted a number of reforms in the wake of Stenger, with the help of a Democratic-led council that has mostly been favorable to his initiatives.

In 15 months in office, he said he has confronted three historic setbacks, any one of which could have preoccupied a county executive for a full four-year term.

In a video posted the morning after the vote that didn’t mention Page, Mantovani said he was “still processing the surprise and disappointment” and thanked his supporters. “I’m disappointed because this loss is primarily my loss, not yours. Leadership requires that you win as a team, but when the outcome is unsuccessful, it must be considered the leader’s loss.”

Zimmerman called Page and offered his support because the “virus doesn’t care how anyone voted,” the assessor wrote to his supporters the next day, noting that his incoming kindergartener son Gabriel had taken it in stride and said that it just means Zimmerman gets to stay county assessor.

“Gabriel is right: the people gave me a job to do. I applied for a different one, and they said ‘no thanks, not this time,’” Zimmerman wrote. “This bittersweet moment is neither an end nor a beginning. But it sure is a great time to take stock of one’s blessings.”

The win was Page’s “17th or 18th” election in the last 20 years, he said, including a run for lieutenant governor, terms in the Missouri Legislature, Creve Coeur City Council and then the County Council.

Before now, however, Page had never run countywide in any of those campaigns, as opposed to Mantovani, who nearly won two years ago, and Zimmerman, who has won countywide as assessor three times.

The COVID-19 pandemic gave Page widespread name recognition he didn’t have last year, with his yard signs and literature emphasizing that he is “Dr. Sam Page.” A physician, Page has spent the last five months almost entirely addressing the COVID-19 pandemic and what he calls the three crises that have risen from it — health, economic and humanitarian.

He issued an early stay-at-home order for St. Louis County in March that he says saved thousands of lives, along with business restrictions that have continued in the months since and a mask mandate that went into effect July 3.

Page was heavily criticized by his opponents and derided by his detractors as a “dictator” for those moves, but voters cast a vote of confidence in how “Dr. Sam” has handled the pandemic. Early on Election Day, Page said he hadn’t realized how much voters accepted his restrictions until they started coming up to him at the polls to tell him about their support.

“Most folks will come right up to me and say, ‘Are you Dr. Page? You’re doing a great job,’” Page said. “The spontaneous enthusiasm is something I’ve never seen before.”

On Election Day, Page crisscrossed the county to visit polls north, south and in between with officials ranging from former County Executive Charlie Dooley in Northwoods, council Chairwoman Lisa Clancy in Maplewood and Sen. Scott Sifton, D-Affton, at the Oak Bend Library.

There were no watch parties on election night, a restriction Page himself had put in place by banning gatherings with more than 50 people. Instead, Page and his wife, Jennifer, went on Facebook Live from their house, with the phone ringing congratulations in the background.

As coronavirus cases climbed in the region, Page imposed seven new business restrictions eight days before the election — a move that could have hurt him politically but seemed instead to bolster his credentials as the leader to guide the county through the pandemic. In the days leading up to the election, health officials sent a letter to all county school districts urging them to go all-virtual for the fall, which is not a popular decision with all parents.

Jennifer Page, the medical director of acute rehab at Mercy Hospital South, starred in a commercial in which she thanked her husband for his coronavirus response. He said the ad was a “metaphor for what I’m doing and why I come to work every day in St. Louis County. I’m here to keep my family safe and the county safe.”

Mantovani and, even moreso, Zimmerman hammered Page through millions of dollars worth of attack ads, with Zimmerman deriding Page’s handling of the coronavirus and the issue of police.

Page made light of that in his victory speech, saying, “I congratulate Jamie Tolliver and Mark Mantovani for running campaigns that made voters and me think carefully about our region’s priorities and focus. I thank Jake Zimmerman for not putting my dog Midnight in one of his attack ads. Midnight is a lot more sensitive than I am.”