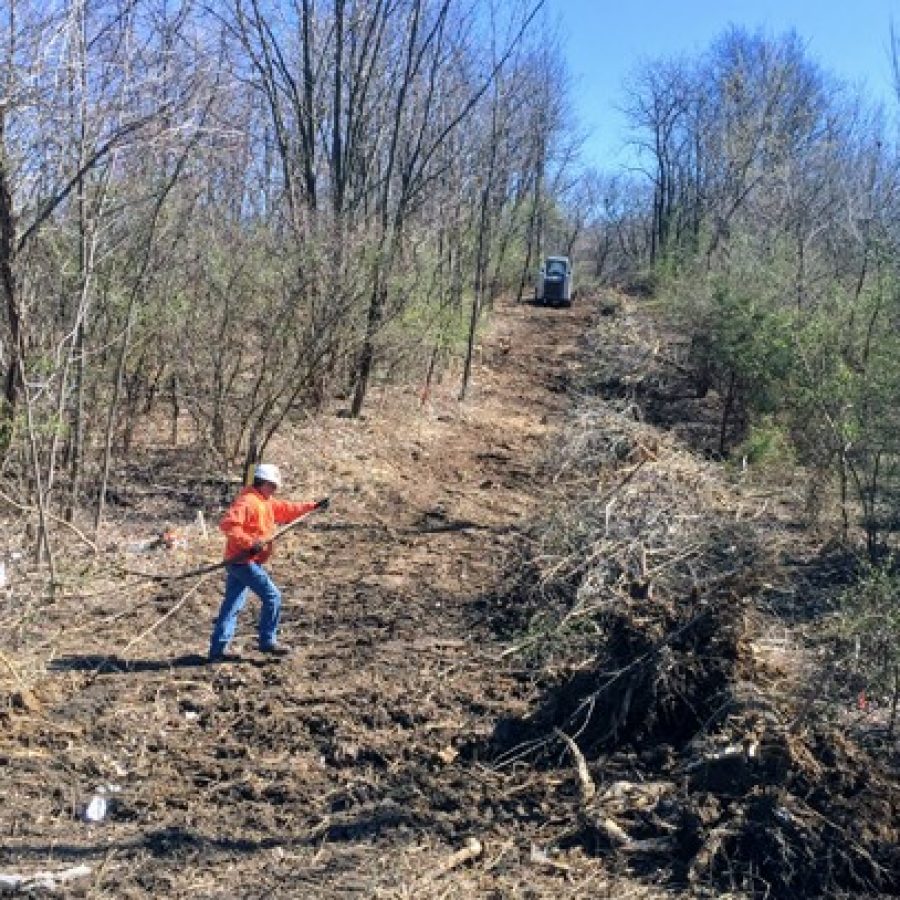 A worker clears away brush at the strip of land at the intersection of Telegraph and Erb that will serve as the construction entrance for a \$5 million trail at Cliff Cave Park.

Neighbors of a new trail extension through Cliff Cave County Park filed a lawsuit and a request for a temporary restraining order to stop construction of the trail this week.

Regional trail district Great Rivers Greenway, which is funding the $5 million trail, began clearing trees at two sites in Oakville last week for the 2-mile paved loop, similar to Grant’s Trail. The path will wind up and down the bluffs from a trailhead on Cliff Cave Road.

A proposed pedestrian-only entrance at Telegraph and Erb roads is on hold pending a safety study this summer, following a compromise between County Executive Stenger and 6th District County Councilman Ernie Trakas, R-Oakville, that moved construction forward without going through the council.

Crews also began clearing trees along the Telegraph strip to bring construction trucks through. If the study, due to finish by Aug. 1, finds that the intersection is safe for a trail connection, construction on the Telegraph trail will continue as scheduled. If not, the land will be replanted with native trees.

Last week’s clear-cutting on the Cliff Cave side drew the ire of some of the neighbors in the New England Town subdivision that borders the park who have fought against the trail for more than a year.

At the greenway’s two open houses last year and at a public meeting held by Trakas Jan. 26, Joan and Nicholas Steska and Kenneth Elliott said they were concerned about safety, traffic, trash and other existing issues in the park growing worse with the increased visitors from the new trail extension.

“The neighbors are concerned about the environmental impacts of the proposed building and trails on this park,” the neighbors’ attorney Kathleen Henry wrote to county Parks Director Gary Bess last week.

In affidavits filed along with the lawsuit, the Steskas and Elliott say the greenway, or GRG, will affect the aesthetics of the view from their houses and the animals — deer, red foxes, turkey and birds — that they’ve seen for decades outside their windows, where GRG plans a new parking lot.

“If the construction is not stayed, I will suffer immediate irreparable loss in that trees will be removed that will take decades to regrow,” Elliott wrote. “The loss of these trees will destroy the wildlife habitat living there, and will take away the views that my wife and I enjoy.”

In the neighbors’ request for a temporary restraining order, they allege that endangered bats came out of hibernation in Cliff Cave as early as Feb. 19 due to the early spring weather and were robbed of their nesting trees when the contractor chopped them down. A restraining order could potentially delay construction until after the bats move out of their nesting trees in August.

Henry hoped to get a hearing on the restraining order as early as Tuesday — after the Call went to press.

One reason Stenger moved ahead without the council was to meet a March 31 construction deadline for removing trees ahead of the April 1 start of the typical bat nesting season. The park is home to many species of bats, some of which stay year-round in the caves, but the endangered Indiana bat roosts in trees during the summer.

“They may be roosting in the trees, and we want the work to be put off until after the bats have moved out of the roosting trees,” Henry told the Call.

GRG consulted with its own conservation staff about the early bat sightings and concluded that it wasn’t a barrier to moving ahead with construction, Communications Manager Seth Treptow told the Call.

“There are some bats that are starting to come out of the caves, but they’re not yet roosting in the trees,” he said. “All accounts show that they are not making their roosts yet. So the tree removal is not really an issue.”

When Stenger announced that he was moving forward with the trail without Trakas, he contended that the council had no say in the project itself, only on an agreement to approve an easement for a sewer line. After he moved the sewer line, it no longer needed approval, either, he added.

“We won’t let $6.2m in Cliff Cave Park improvements go down the toilet because a councilman won’t approve a toilet,” Stenger tweeted Feb. 22.

Where that money comes from is key to the neighbors’ lawsuit. In the accompanying petition, Henry alleges the county is “spending public money unlawfully” by appropriating county taxpayer dollars without approval of the council.

That amounts to an “illegal contract,” she told the Call.

However, Treptow said the entire project is funded by Great Rivers Greenway, a regional trail district that takes in money from a sales tax in St. Louis County and city and St. Charles County and builds trails in all three areas.

Although officials had quoted a $1.7 million planning and design cost in recent weeks in addition to the money spent directly on the $4.6 million trail, Treptow said the $1.7 million in planning costs includes previous costs for a prior project in Cliff Cave. The current trail cost about $500,000 to design and plan, he said, for a total cost of $5.1 million.

But the lawsuit contends that $1.7 million of the $6.2 million total for the trail are county tax dollars which the county Charter requires to go through the council. The likelihood of the suit succeeding is “high,” the petition contends, because the council has not passed an ordinance, a “clear violation of … the St. Louis County Charter.”

Stenger was unavailable for comment before the Call’s press time.

Speaking before the lawsuit was filed, Trakas said he had heard rumors that the neighbors might file for a restraining order.

“I wouldn’t be surprised, I guess is the best way I can describe it,” Trakas said. “I know how those folks feel. As far as the trees being cleared — you’re preaching to the choir, I tried to tell people that. It would not surprise me if it’s pretty stark.”

Although Trakas’ legislative assistant Carmen Wilkerson posted on Facebook that Trakas “fought tooth and nail” against the trail, Trakas had said he was a proponent of it to trail supporters who spoke at the council.

“I stand by what I’ve stated on the record, which is that I was a proponent of the trail as I proposed it to be modified, which did not envision any entrance at Telegraph and Erb,” Trakas said.