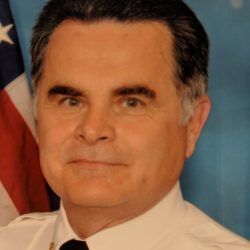 Kestler became Crestwood’s fire chief in 1997 and served in that position for 15 years before retiring in 2012, ending a 37-year career with the Crestwood Fire Department. Some of his accomplishments as chief include seeing the city hire its first female firefighter, being twice appointed acting city administrator of the city of Crestwood and the establishment of a smoke-detector program for older residents.

“Kestler was a distinguished public servant, a leader and a longtime Crestwood resident, and he embodied the best qualities of public service,” said Mayor Grant Mabie. “We mourn his loss, and we extend our deepest condolences to his wife Robyn, his family and all who knew and worked with him during this difficult time.”

Kestler was born Dec. 6, 1951, in St. Louis. He attended Cleveland High School where he played football, baseball and soccer. He also played soccer and baseball at Meramec Community College before graduating with his Bachelor of Science degree from Maryville University.

Kestler began his career as a firefighter with the Crestwood Fire Department in 1975.

He was known for keeping a low profile and was a distinguished public servant and leader, greatly admired by many who knew and worked with him.

His favorite pastimes were muzzle loading, weight lifting, cheering on the St. Louis Cardinals and spending time with the love of his life, Robyn. They enjoyed bike riding and traveling the world.

Kestler is survived by his wife and high-school sweetheart of 47 years, Robyn Kestler, nee MacDonald.

He was the loving brother to Xavier, Mary June (Harold) Walker, Eugene (Janice), Gary (Donna) and Kevin (Jackie). He was an uncle, great-uncle, cousin, colleague and dear friend to many.

He is preceded in death by his parents Earl and Mag Kestler.

He will be deeply missed by his family, colleagues and friends who loved him.

Memorial donations can be made in his name to the Siteman Cancer Center, 4921 Parkview Place, 63110.

A visitation was held April 8 at John L. Ziegenhein & Sons Funeral Home in South County. A funeral was held Tuesday, April 9, at the funeral home. Interment was at Mt. Hope Cemetery.