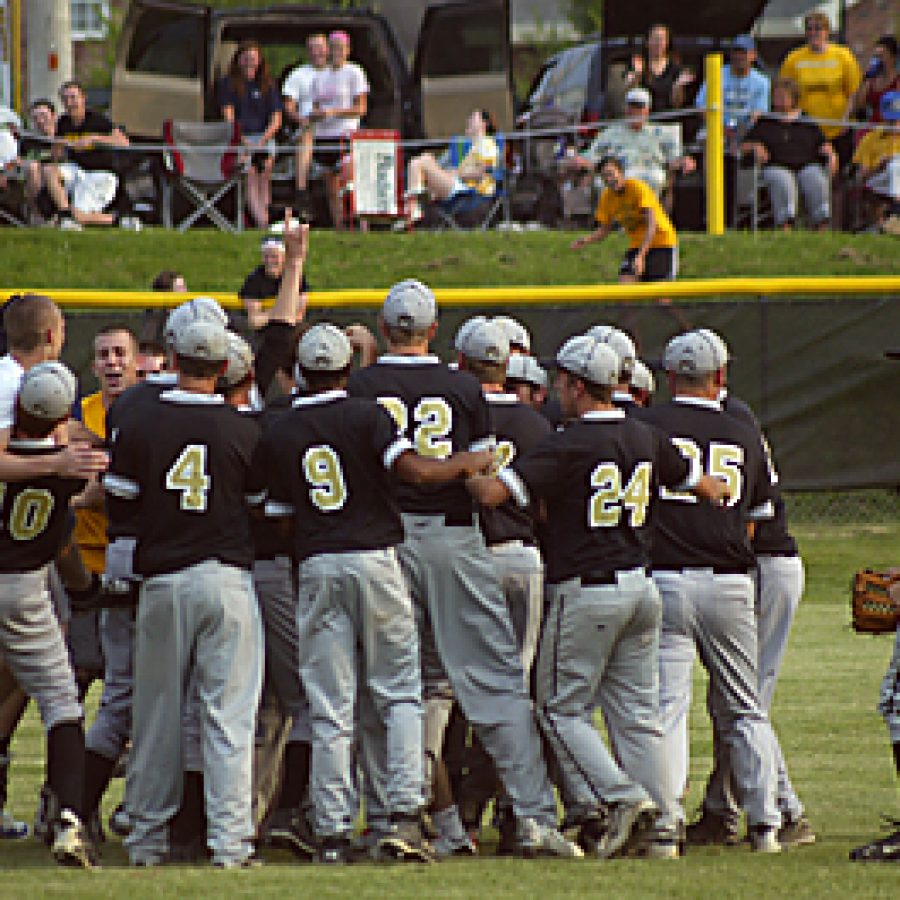 Oakville students rush out to celebrate the win with their team after climbing the outfield fence upon the cessation of quarterfinal play. The Tigers will meet Webb City at 4 p.m. Friday in Springfield.

After a seven game skid at midseason it appeared the Tigers, 22-7, would miss the championship tournament again, but Sturm credits junior Dalton Bray’s walk-off grand slam to beat Francis Howell North on May 3 as the spark that ignited this year’s Tigers.

Pacific, 21-2 on the season, can credit the Tigers for ruining a perfectly good season. The day after Bray’s grand slam, the Tigers handed them a 4-1 loss.

During the 10-game streak, the Tigers have outscored their opponents 117-23.

“We’ve had hitting up and down the lineup,” Sturm said. “We knew we’d be better than a lot of people gave us credit for this year.”

Oakville lost 13 seniors and eight starters off the team that was ranked tops in Missouri last year before bowing out in De Soto to close the 2009 campaign.

“Trips to the final four; you just don’t know when that will happen,” he said

Certainly, Pacific felt it could have been among the final four next week.

“Then we come out here and have our worst game of the season,” Coach Jeff Reed said. “The credit goes to Oakville. We walked seven to eight people. They deserved the win.”

Chad Gendron, 6-2 for the year, pitched all six innings for Sturm in the quarterfinal against Pacific. He allowed six hits and three walks while fanning five batters.

Hitting was the key to the Tigers’ travel plans. They batted around in the fourth and sixth innings powered by three-hit performances from Tyler Bunge, Tim Dalton, Tim Chambliss — who had a relative on the 1989 state finals team — Dalton Bray, and Andrew Pilcher. Kyle Sparks added two hits, one of them an RBI double. Jake Russo had a hit and two walks. Ryan Simmons, and Dalton each homered.

“I’ve never forgotten that state tournament,” Sturm said after the May 27 win against Pacific. “It’s something this team will never forget.”

The Tigers will meet Webb City at 4 p.m. Friday in Springfield.