Oakville still adds more COVID-19 cases than any other ZIP code, but cases trending down from August highs 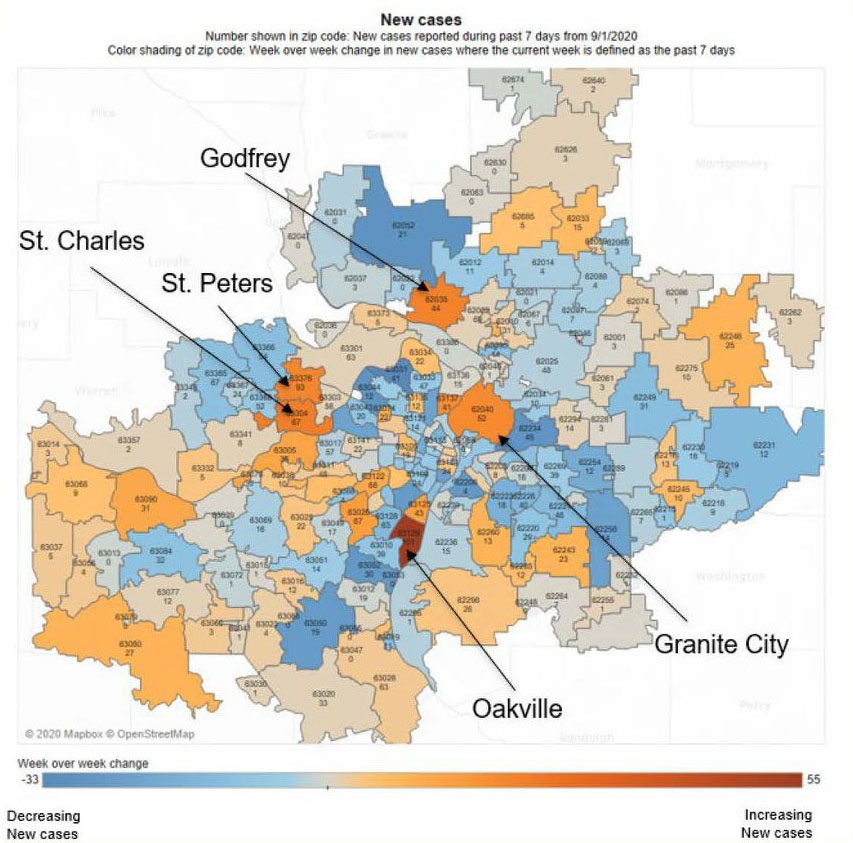 The St. Louis Metropolitan Pandemic Task Force presented this slide Sept. 9, 2020, showing Oakville with the most cases of any other ZIP code in the 15-county region.

Oakville is again the ZIP code seeing the highest number of new COVID-19 cases in the entire St. Louis metropolitan region, but the number of cases is down from the highs of a month ago.

The St. Louis Metropolitan Pandemic Task Force again singled out Oakville in data released Wednesday as the ZIP code with the highest number of new cases in the past seven days, 101.

For the last month, Oakville has been at or near the top of the task force’s ZIP codes in the number of new cases. The data includes ZIP codes from both Missouri and Illinois.

“You’ll see some hotspots come up in some parts of the metropolitan area, where they continue to decline in other parts —we’re seeing localized increase in cases throughout the metropolitan area,” SSM Health Chief Medical Officer Alex Garza, the commander of the task force, said in a briefing Wednesday. “… It’s a little bit of a mixed bag in the metropolitan area as far as cases go. … There’s different regions that are doing well, some not as well.”

Although Garza did not mention Oakville by name in the briefing, its numbers of new cases were higher than the areas Garza singled out in Jefferson and Franklin counties.

Although South County’s ZIP codes are seeing some of the highest case numbers in the county over the last two weeks, the local numbers are trending down from where they were a month ago when the task force first singled out South County and Jefferson County as coronavirus hotspots. Based on that trend downward, the Mehlville School District said Thursday it will return preschool and K-2 students to school starting Sept. 22.

County Executive Sam Page said that he isn’t entirely sure why Oakville would have the highest number of new cases in the last seven days, but proximity to Jefferson County is a possibility, as is a resistance to masking. The county has had a mandatory mask mandate in effect since July 3, and strengthened it Aug. 24 to require businesses to turn away customers who aren’t wearing masks.

The county said at the time that it had received many complaints about people not wearing masks. Page said Friday that the county has noticed many of those complaints from South County.

“Oakville and South County in general, we have noticed we have more complaints about masking in South County,” Page said. “And certainly the proximity to Jefferson County where they do not have a masking mandate and some back-and-forth mobility may be contributing to that.”

The county Department of Public Health is “working with businesses in South County to reinforce our masking mandate, to reinforce those guidelines to help them understand those guidelines and help them communicate with their patrons to try and improve masking compliance in the Oakville area, which we believe is part of the challenge to their high rate of COVID-19 infection in St. Louis County,” Page said.

In new data posted to St. Louis County’s website that shows the case totals and rate per 100,000 cases from the last two weeks, Oakville’s 63129 ZIP code is currently near the top of county rankings, along with Fenton, Eureka and other areas that border Jefferson and St. Charles counties.

Although cases at the beginning of the pandemic were more frequently seen in North County, South County’s ZIP codes showed higher rates of transmission the last 14 days compared to most of North County, with the exception of Bridgeton and St. Ann, which border St. Charles County.

St. Louis County also said Wednesday that new data indicated that the youngest elementary children are not testing positive for the virus at the same levels seen in teenagers, so the county recommended that younger children could return to in-person school.

Mehlville announced its decision the next day to return K-2 students to in-person school. Lindbergh Schools had already started school with K-2 students in person, but expanded that to students in fourth and fifth grades starting next week. The other South County school districts, Affton, Hancock and Bayless, have committed to an all-virtual first quarter.

But some parents commenting on the district’s Facebook page said the graphs appeared to show a current upward trend even as overall rates and cases are down from the highs of a month ago. They would have preferred that the district wait two weeks after Labor Day to see if cases spiked again.

Gaines said that transmission data is up, but those numbers cover the whole region, and higher levels in outstate counties are affecting that rate. Positivity rates are also going down, but those are for the whole county. To see the graphs Gaines showed with district-specific data, see the gallery below.

The superintendent said that the district received no data for the seven days of Sept. 1 to Sept. 7, so when all those cases were released Sept. 8, that made the graphs appear to show a spike where there wouldn’t have otherwise been one.

The transmission rate in the region is hovering around 1, which means that each case leads to around one more case.

Since July 28, the St. Louis County positivity rate — the rate of people taking COVID-19 tests who test positive — has fallen from around 10 percent to around 7.5 percent. The district is also analyzing the seven-day, 14-day and 21-day trends for positivity. Those have all fallen overall.

Gaines is also looking at the ZIP code-specific data for Oakville, Concord and Lemay, also on seven-day, 14-day and 21-day trend lines. Those have been trending downward overall, although the seven-day graph shows a dip and then a spike back up.

The district now has a COVID-specific dashboard on its website for Lindbergh-specific data: https://go.lindberghschools.ws/Page/16079

The surrounding areas the district analyzes include Oakville 63129, Shrewsbury 63119 and Lemay 63125.