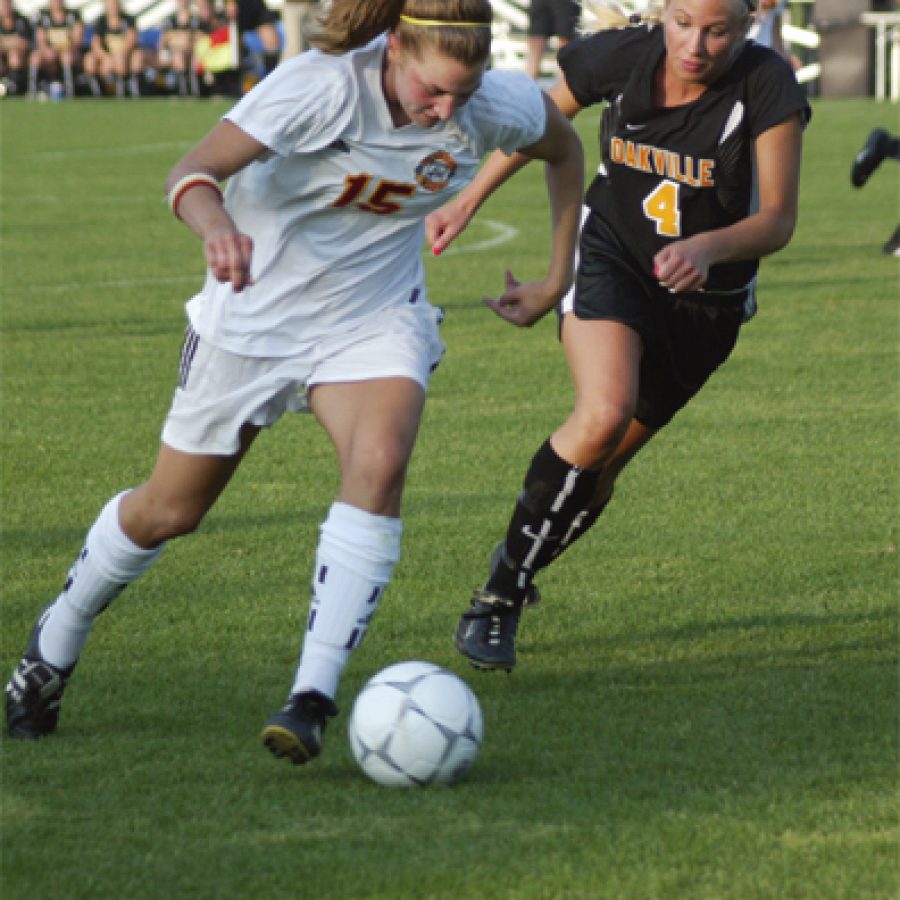 Oakville High senior defender Lauren Dieckmann, No. 4 in the photograph to the left, chases Incarnate Word's Jenny Kates, No. 15, to keep her from centering a pass to teammates waiting near the goal Saturday during state semifinal soccer action at Soccer Park in Fenton.

At their 10th- or 20th-year reunion, members of the Oak-ville Senior High School girls’ soccer team will look back on the 2005 season with fond memories and realize their mark in Tiger soccer history.

The Tigers (16-10-1, 6-1-1 Suburban West) had a memorable run through the state playoffs before suffering a 3-0 shutout to defending state champion Incarnate Word Academy in the state semifinal game. The loss marked an end to a five-game winning streak in which Oakville re-corded five shutouts.

Despite the loss to the Incarnate Word Red Knights, Oak-ville head coach Dave Robben believes that the trip to the state semifinal will turn into a good learning experience for his young squad.

“It was an unbelievable experience to be a part of the state tournament,” Robben told the Call. “To be a part of all the excitement that’s part of the final four, I’m extremely proud of our girls. I think it’s apparent to the team as to what it will take to close the gap between the private and public schools.”

The Tigers were the only public school represented in the state’s Final Four that included Incarnate Word Academy, Nerinx Hall Academy and St. Teresa’s Academy.

“I’m extremely proud of the way the girls played,” Robben said. “We got a lot of compliments on how they handled themselves and the way they played on the field.”

In the third-place game against Nerinx Hall, the Tigers dropped a 4-1 decision to nationally ranked Nerinx Hall, which had lost to St. Teresa’s 3-0 in the other state semifinal game the day before.

“It was probably the hottest day of the year and we came out strong,” Robben said. “It’s pretty impressive when you’re playing the No. 1 team in the nation in the third-place game.”

Oakville’s lone goal of the game came from sophomore midfielder Emma Kriegel, who ran up on a pass from freshman forward Megan Wingenbach.

“Emma hit a blast up in the corner from about 20 yards out,” Robben said. “That goal came off of some really good passing.”

Kriegel finished the season with seven goals and eight assists for 22 points.

The Tigers graduate just four seniors from this season’s squad — Sara Cook, Lauren Dieckmann, Jenna Milward and Heather Siegmund — which leads to a lot of promise in years to come.

“The most important thing to say is how proud I am of these kids,” Robben said. “They did what it took to get to the Final Four.”