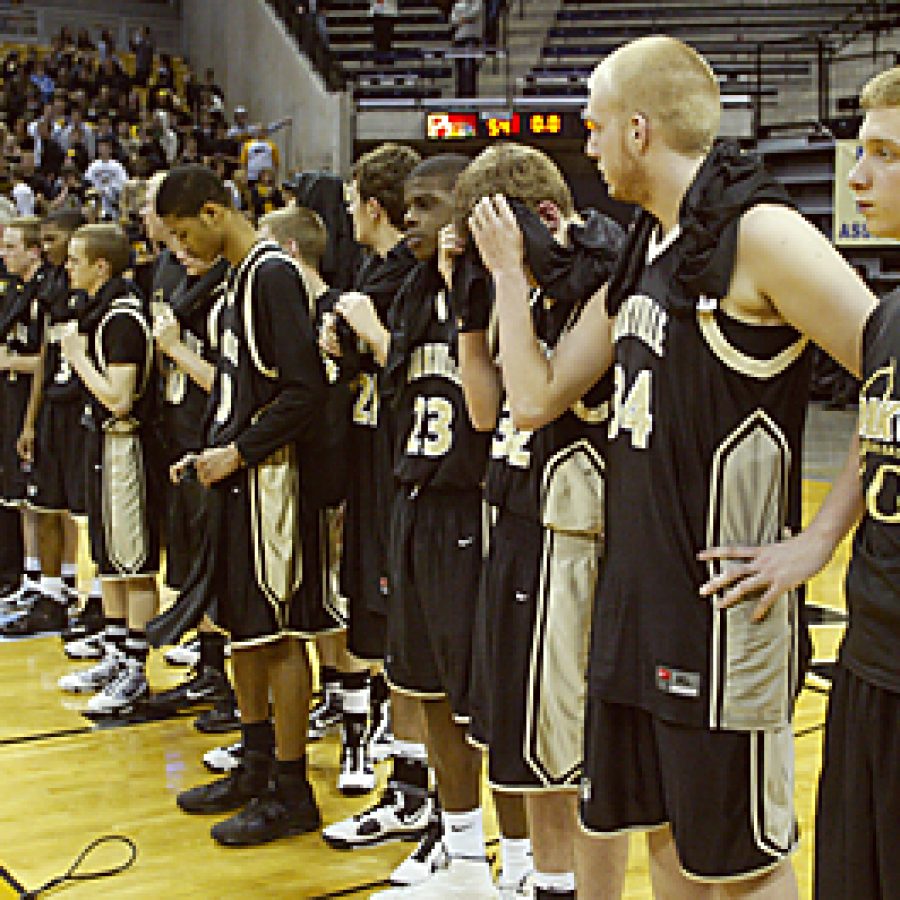 Coaches and members of the 2009-10 Oakville Tiger varsity basketball team seem devastated after an 11-point swing during the final three minutes of play left them clutching a second-place trophy instead of the State championship at Mizzou arena Sunday. Bill Milligan photo

When Josh Noblitt put in a layup with 3:38 remaining in the fourth quarter of the Class 5 state championship game Saturday it seemed as if Oakville Senior High School was set to win its first-ever state basketball title.

But four minutes later, the Tigers, 27-5, were lining up to accept second-place medals after Springfield Hillcrest pulled off its second dramatic comeback of the Missouri State High School Activities Association’s championship tournament and a 54-49 victory.

“In districts we were down by 16 and came back,” Hillcrest senior guard Issac Sade said. “Six points didn’t seem like that much.”

A few seconds later Hillcrest’s Dorial Green cut the lead to four with a layup.

A foul by Torriano Hellems sent Hillcrest’s Trey Starks to the line where he sank two and cut the Tigers’ lead to a bucket and then sealed the game.

Hellems tried to penetrate the Hillcrest zone defense only to be rejected by Green with 2:21 left in the game.

The game was tied seven times. The lead changed hands eight times through the two hours-plus it took to play.

“They were 17 of 21 from the free-throw line,” Oakville Head Coach Nick Traxler said. “That makes a difference. Starks and Green just had a monster games against us.

“A couple times down the stretch we tried to challenge Green. We should have pulled the ball back out, ran a little bit of clock and got a good shot. We made some decisions that kinda cost us.”

Hillcrest assumed a 1-point lead with 1:28 remaining on Green’s layup, took a 3-point lead 26 seconds later with another and a 4-point lead when Green sank a free throw with :29 seconds remaining.

The Hornets then scored on four more free throws while Oakville had to foul to conserve time on the clock and regain possession.

Despite a blocked shot by junior guard Javier Duren and a pair of three-pointers by Noblitt and Hellems, the Tigers simply ran out of time.

“That’s the first time in 13 games we’ve trailed most of the game,” Hillcrest Coach John Schaefer said after the game. “We talked about why we were trailing at halftime.”

“When I took this job three years ago the team was sub-.500,” Schaefer said. “This will bring a lot of pride to our school and our community.”