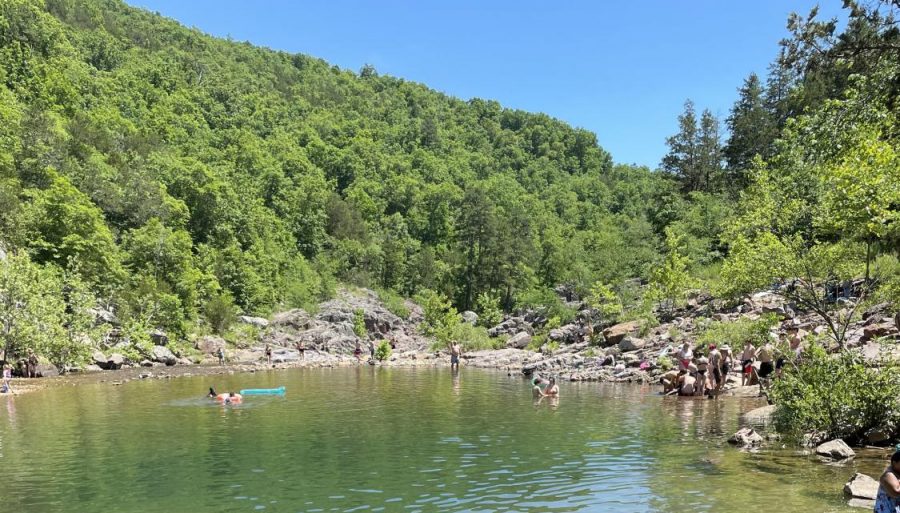 A photo of the rescue as it happened at Johnson’s Shut-Ins June 14.

A teenager who nearly drowned at Johnson’s Shut-Ins State Park last week was rescued by a group of quick-thinking teen lifeguards visiting from Oakville, with help from a fateful trip to Walgreens.

The Missouri State Highway Patrol identified the 19-year-old who nearly drowned around 2:30 p.m. June 14 as Tama Keawena of Jennings.

He was pulled from the water by Emma Sullivan, 19, a 2020 Oakville High graduate and current student at the University of Missouri-Columbia. She and a large group of friends, including several lifeguards certified in first aid, headed to the popular but dangerous swimming hole at the state park in Reynolds County to celebrate the start of summer after that trip to Walgreens, where Sullivan bought a pair of goggles.

After spending nearly the whole day at the park, a few of the lifeguards noticed that Keawena, part of a separate group whose friends called him “Teddy,” seemed to be struggling in the water. But his group of about six friends didn’t take him seriously.

“I had noticed before that someone was fake drowning which does happen a lot, and his friends were saying he was a real big jokester,” Sullivan said.

The former lifeguard bought the goggles on a whim because she knew the water at the Shut-Ins is so murky that it’s difficult to see. Donning her goggles, Sullivan dipped underwater to swim and saw that every time she’d return to the surface, Keawena wasn’t in his usual spot between his friends. At first she thought he might be surfacing as she dove under, but then she saw him lying facedown on the floor of the Black River, 8 feet below the surface.

Planting her feet on the river bottom, Sullivan picked Keawena up and pushed both of them above the water. Witnessing her friend take charge in the rescue, Martin said of Sullivan, “She went into full action.”

Although it went off without a hitch, this was Sullivan’s first major rescue as a lifeguard and first under the water.

“I’ve never had to deal with anything like that, especially just lifeguarding around Oakville,” she said. “Honestly, what was running through my mind was just making sure that we do everything that we could to bring him back.”

“It was a group effort from then on,” Sullivan said, and onlookers all moved swiftly since Keawena had no pulse.

A woman certified in first aid — the girls did not get her name — confidently carried out 10 rounds of CPR while Sullivan held her hand under Keawena’s head, turning it to the side when water or blood came up.

Ezell held his head up, making sure his airway wasn’t blocked and his lungs could expand and take in more air. After another bystander, a third-grade teacher named Louie, jumped in for more rounds of chest compressions, Keawena revived and even started talking, weakly.

“It was great to see him open his eyes,” Sullivan said. “I can’t imagine if I would have been there and we wouldn’t have been able to get him back.”

It took paramedics about 25 minutes to climb through the rocks and reach the rural area. By that time, Keawena was breathing on his own and starting to recover from the shock his body had just lived through.

Amazingly, this was not the first group of Oakville teenagers to save someone drowning in rural Missouri in recent years. In summer 2018, Josh Krueger and his friend Jacob Leath, both 14-year-old Bernard Middle Schoolers at the time, were floating on the river in Steelville when they saw a man drowning in the water, freed him from tree branches and got help for him nearby. The boys,  now incoming seniors at OHS, won awards for that rescue.

Sullivan credits her quick thinking to her training and her goggles, since no one else at Johnson’s Shut-Ins that day had a pair. She hadn’t brought them on past trips.

“I don’t know if anybody would have been able to see him unless they were scrolling all the way to the bottom, and they were wearing goggles,” she said. “I was just there at the right time. I think eventually they would have noticed (he was gone), but at that point since he had no oxygen, every second mattered.”

Witnessing the rescue, Martin said the moment Sullivan pulled Keawena up was even more intense because of the way his friends dismissed his drowning.

“It was actually really scary because when she pulled him out he was foaming, and the friends still thought he was joking,” Martin said. “The friends started freaking out after they realized it was all real — they said thank you to everyone who helped.”

Studying as a health-science major at Mizzou, Sullivan had already considered going into healthcare fields such as physical therapy, nursing or even medical school. She wasn’t planning to work as a lifeguard this summer, but she kicked it off with her biggest rescue ever.

“I’m just glad I brought my goggles, that’s for sure,” she said.