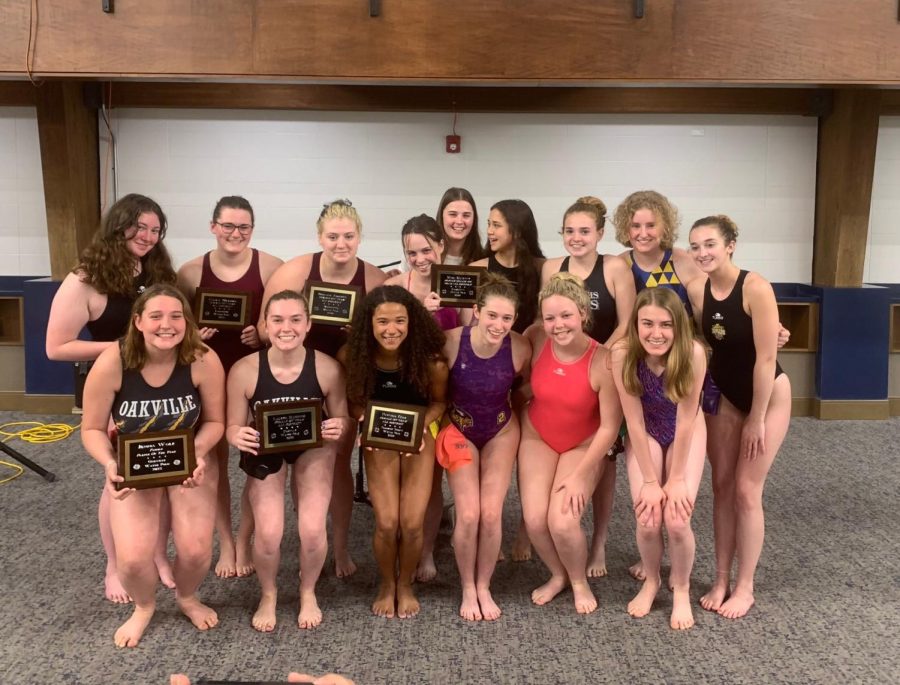 The Oakville High School girls water polo team finished its second season ever with a state championship win against Marquette High School May 14. Two Oakville players, Jenna Wolf and Lauren Manning (bottom left) were named to the all district team.

The Oakville girls water polo team closed out its second season in the best way possible May 14, winning a state championship.

The Tigers were able to exact revenge in the final game, defeating the Marquette Mustangs in a rematch of the 2021 championship. Graduated senior Jenna Wolf, the 2022 Female Player of the Year, said the chance to return to the finals had been on her mind all year.

“That’s pretty much all I thought about for a full year, this year’s state championship,” Wolf said. “(I was) both excited but also kind of terrified, because last year … really hurt.”

The girls water polo championship has only existed for the past two years, with mens and co-ed predating it. Coach Brett Walters said a lot of the success of the girls team at Oakville was due to the co-ed experience of the team.

Outside of the ball size changing from “five” to “four” for girls games, Walters said the physicality of playing against 18-year-old men probably made the game look easier for players like Wolf. Wolf led the state in assists and finished second in goals to earn herself player of the year.

The whole team experienced a learning opportunity mid-season when traveling to Chicago for a tournament. Walters said the level of competition in that tournament was way ahead of Missouri due to how new the all girls game is here.

“We didn’t win any games up there, but I felt like it was very beneficial because we got to see high-level girls water polo and we were able to bring a little bit of that style back,” Walters said.

The Tigers went undefeated in Missouri, and the closest they came to losing was the state final against Marquette. Walters said the Mustangs’ game plan featured a lot of double teams on Wolf, and Oakville did fall behind several times as a result. Once Walters recognized the strategy, the Tigers began moving the ball faster and finding the player not guarded due to the double team.

Four other Tigers — Lauren Manning, Abby Alton, Mallory Guentz and Taylor Luckritz — were named to all-conference teams and Walters was named the Yellow Pool Coach of the Year. Wolf is continuing her water polo career next year at McKendree University, where she will study computer science.