Oakville citizens upset over no reimbursement for recent flood damage 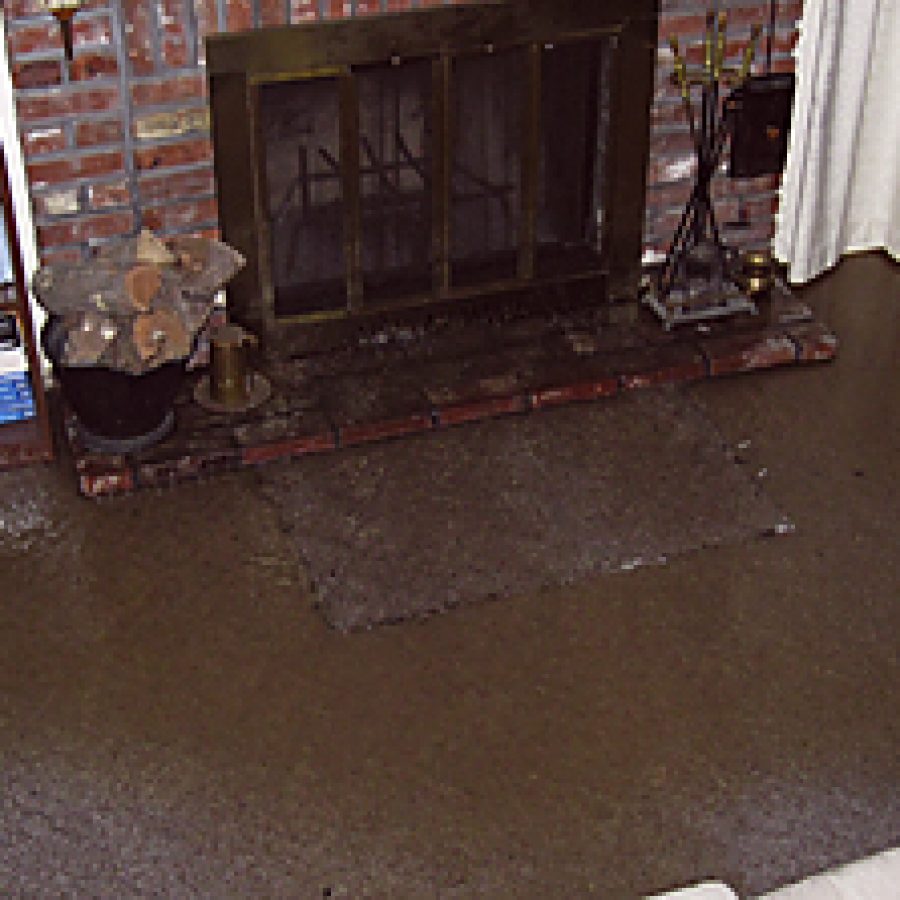 Torrential rain the evening of July 7 resulted in flooding that damaged the basement of Ginny Antonacci's Oakville residence as shown in this photo taken by her daughter Alyssa.

Some Oakville residents cleaning up after heavy rain caused flash flooding in their yards and basements are upset that the Metropolitan St. Louis Sewer District might not reimburse them for damages.

A handful of those residents voiced their concerns to MSD officials during the July 14 Board of Trustees meeting — a week after heavy rain doused the region and turned some areas of south county into small lakes.

MSD can provide up to $2,500 — with a $100 deductible — to customers who file claims for basement backups caused by an overcharged or blocked sewer.

However, the policy doesn’t extend to overland flooding — the pooling of water on land after a heavy rain that can enter homes through windows, doors and foundation cracks. MSD officials said while that appears to be the case in south county, they plan to double-check their assessment.

“If it’s overland flooding that caused the backup, we can’t cover it,” MSD Manager of Public Information Lance LeComb said after last week’s board meeting. “If it’s coming in through the windows and the back doors, as some referred to tonight, unfortunately we won’t be able to cover that. We are going to double-check; we’re going to look at the circumstances individually, one-on-one, and we’re going to make sure that it was overland flooding that caused what these folks had to deal with unfortunately.”

Residents who addressed officials last week contended that if overland flooding indeed occurred, it was worsened by a blocked or overwhelmed sewer system.

Frank Schmitt, who lives on Sugar Spring Court, said at the meeting that more than a foot of water had accumulated in his basement a mere 30 minutes after the rain began on July 7. More than 4 feet of water flooded his front yard, Schmitt said. His son’s car, a blue Ford Mustang, was a total loss because of the water damage it sustained, he said.

An MSD representative told Schmitt the district would cover damages caused by a sewer backup in his basement but “has nothing to do with” above-ground water damage, Schmitt said.

“My photographs and what I saw — I have a full-size storm sewer that goes in my backyard. It flows from the backyard to the front yard. In front of my house I have two storm sewers. The water was flowing from the back to the front, and there was obviously some type of backup in the sewer system which made the water rise up,” Schmitt said.

“It came up against my house and flooded my whole backyard … I have a picture of my basement window three-quarters of the way underwater. The water was running in from that. My air-conditioning system that sits on the same side was underwater.

“I don’t have a whole lot of damage, but I do have some damage,” Schmitt continued. “And when he said that any water that was on top, MSD would not do anything about — the water was on top because it couldn’t flow through the sewer system anymore. There was some type of blockage …”

Schmitt’s neighbor, Ginny Antonacci, who lives on Meramar Drive, affirmed his comments and said the flood caused “significant damage” to her own property. Her claim also was denied, she said.

“MSD, when I’ve talked to them, they’re like: ‘Well, you know, if you have 2 inches of rain this can happen again.’ Well, you need to fix the sewers, or you need to figure out how to control this water,” Antonacci said. “You need to be a little more accountable to the public that you serve … We need to find a way to make it better for the citizens and the consumers that you serve. Because these are our lives, these are our families.

“Luckily, nobody got hurt, but when there’s enough water to have children in canoes, it’s a problem. When cars are floating down the street, it’s a problem. I’m sorry, but a foot of rain should not cause 5 feet of rain in your subdivision.”

Antonacci said she has “always” supported MSD, including the agency’s requests at the ballot box for additional revenue.

Trustee John Goffstein said to MSD Executive Director Jeff Theerman, “Jeff, do we know what caused the problem out in south county?”

Theerman said, “All I can tell you is south county got a lot of rain, but what I’m concerned about is, was there a problem with the system and how it was functioning? And that’s what we need to go out and have a look at. As I told Mr. Schmitt, that’s our intention.”

Elizabeth Bridges, who lives on Storm Lake Drive, said her street was under two feet of water.

“There are four sewers that were underwater, and that shouldn’t happen,” Bridges said. “And it’s very scary, very distressing standing on my front porch, looking at this scene and I’m saying: ‘Please stop raining …'”

Holding up her flood photos to officials, Bridges said, “Can you see? The fire hydrant is nearly under. The neighbors were appalled, coming down the street with cameras and looking at what they just missed because they were lucky to be up a few more feet higher.”

Bridges said she has not filed a claim but contacted the district to request slotted covers be installed on the sewers. She said this is the fourth time she has seen flooding on her street, “but never this bad.”

“Ultimately, it is a municipal decision how stormwater systems are built in those areas prior to MSD’s authority on stormwater. It’s a municipal decision to go ahead with future development. And what we are doing as a community, we are paving over so many green spaces, doing so much development, that there is very little extra room for that water to go to, and there needs to be a holistic approach to this.

“Stormwater infrastructure, stormwater sewers, those are built by developers to standards and then they are turned over to MSD. If that isn’t adequate for the rain events that we’re having, then they need to be improved upon. They need to be expanded. We need to do more work. Without the funding, we can’t do these types of projects.”

In March 2008, MSD switched from charging a flat 24 cents per month for stormwater services to a rate based on a property’s impervious area — surfaces that cannot hold water. That charge was designed to “raise more money so we could address issues like this,” LeComb said.

Shortly afterward, Chesterfield resident William Zweig and others filed a class-action lawsuit against the district, contending the new stormwater charge was a tax that should’ve gone before voters as required by state law.

A Lincoln County judge last year sided with the plaintiffs and invalidated the impervious charge. The decision forced MSD to reinstate the flat fee, which officials estimate will cost the district $20 million in annual revenue for stormwater projects.

“Essentially, out in that area of the county, we don’t have money to perform stormwater services. We’re very stretched to even make visits because of the decision on that suit,” LeComb said, noting MSD has appealed the case. “… Regardless of if we win the appeal or not though, there has to be a solution to stormwater funding in our community. There absolutely has to be.”