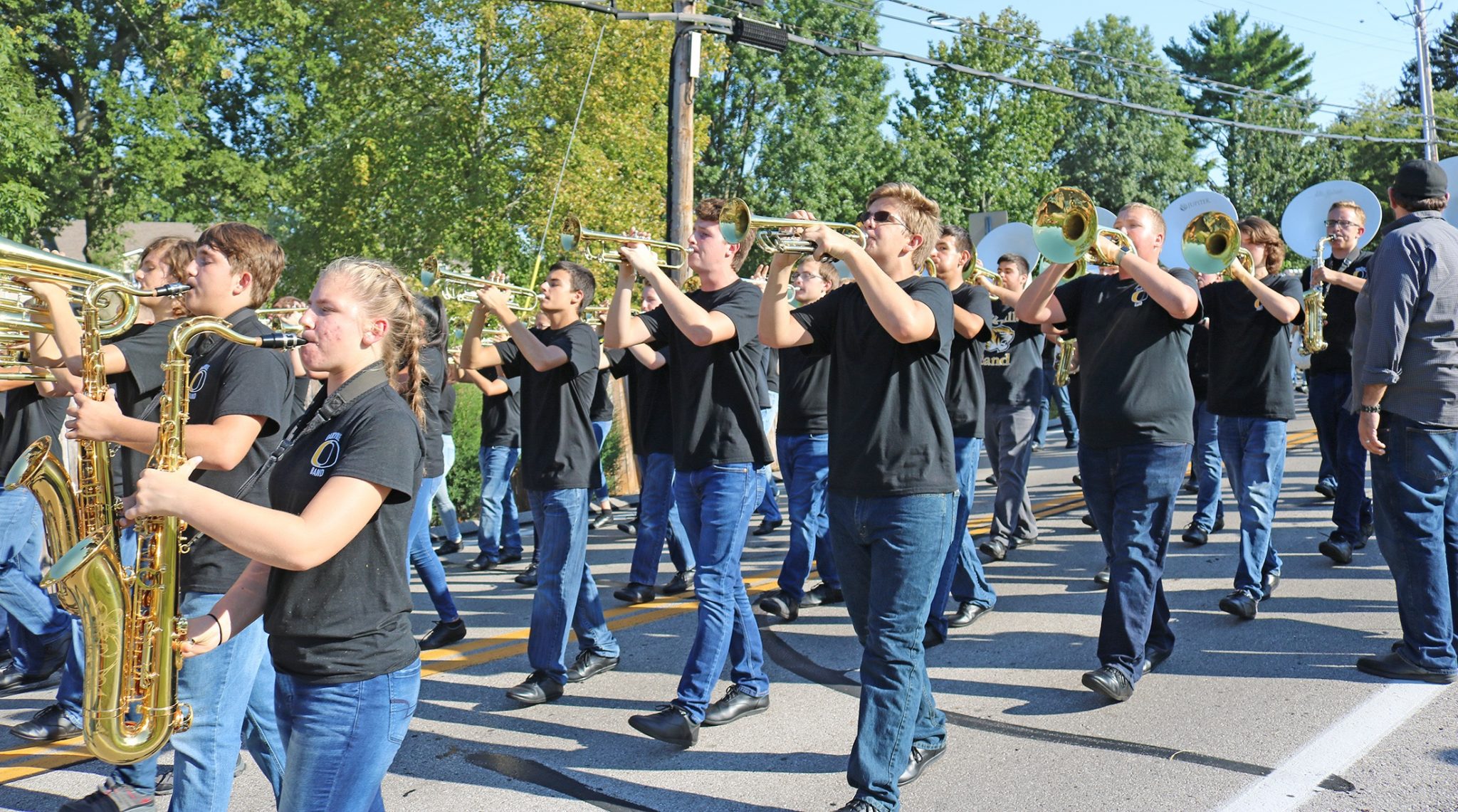 Pictured above: The Oakville High School Tiger Band performs in the school’s homecoming parade in September.

The Oakville High School Tiger Band will be front and center at the 75th anniversary of the D-Day landing in Normandy, France, in June 2019 — but they need to raise more than $500,000 to get there. 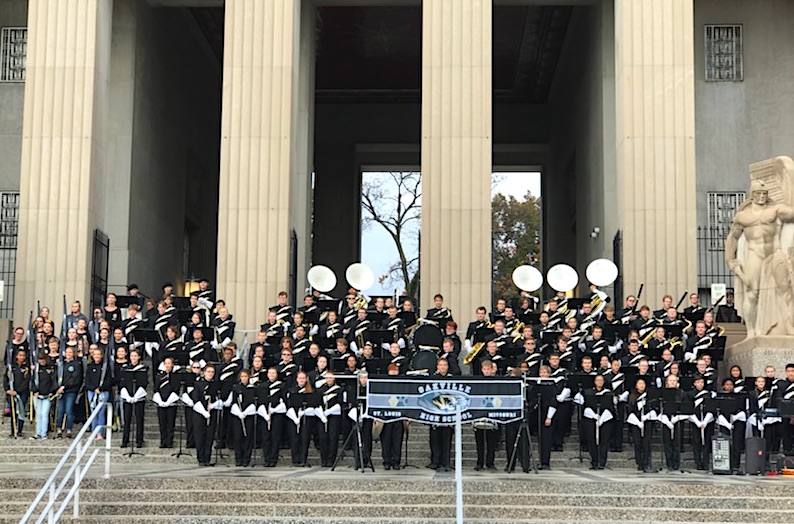 The Oakville band poses in front of Soldiers’ Memorial at the memorial’s re-opening weekend.

So far, the band has raised $30,000 toward its goal. The band has several fundraisers coming up this fall that will be featured in the Call’s calendar section.

The Oakville musicians will join a select group of America’s finest musicians to commemorate the milestone anniversary of when U.S. Armed Forces landed in Normandy, France, beginning Europe’s liberation from Nazi tyranny, and pay tribute to those who fought there.

The band, which is in the Mehlville School District and led by band director Vance Brakefield, is working hard in advance of the trip on both their performances and raising money to “march in the footsteps of valor.”

Band members performed Nov. 4 at the grand reopening of the Soldiers Memorial Military Museum at the Missouri History Museum in Forest Park. The band performed on the steps of the revitalized museum, which reopened just in time for Veterans Day after a two-year, $30 million renovation.

The Tiger Band also performed Oct. 26 at the Bands of America Super Regional Championship at The Dome at America’s Center, earning a 1 rating. That performance ended the band’s 2018 season, which saw first-place finishes at the Farmington Marching Invitational, Fort Zumwalt North River City Showcase and the Seckman Jaguar Pride Invitational.

He said he enjoyed their halftime show at football games, which had a “Genie in a Bottle” theme, with students dressed as genies popping up from oversize “bottles” on the field.

When the OHS students arrive in France, they will participate in the D-Day Memorial Parade and Musical Salute to the Veterans. Among an elite group of high-school bands from across the country, the band’s selection was based on its superior performance at the 2017 President’s Cup competition in Washington D.C., and its national reputation for excellence, according to information from the Oakville Band Parents Association.

Over 150 band members, along with the award-winning color guard, will participate in four official ceremonies to honor the American soldiers who fought in France. 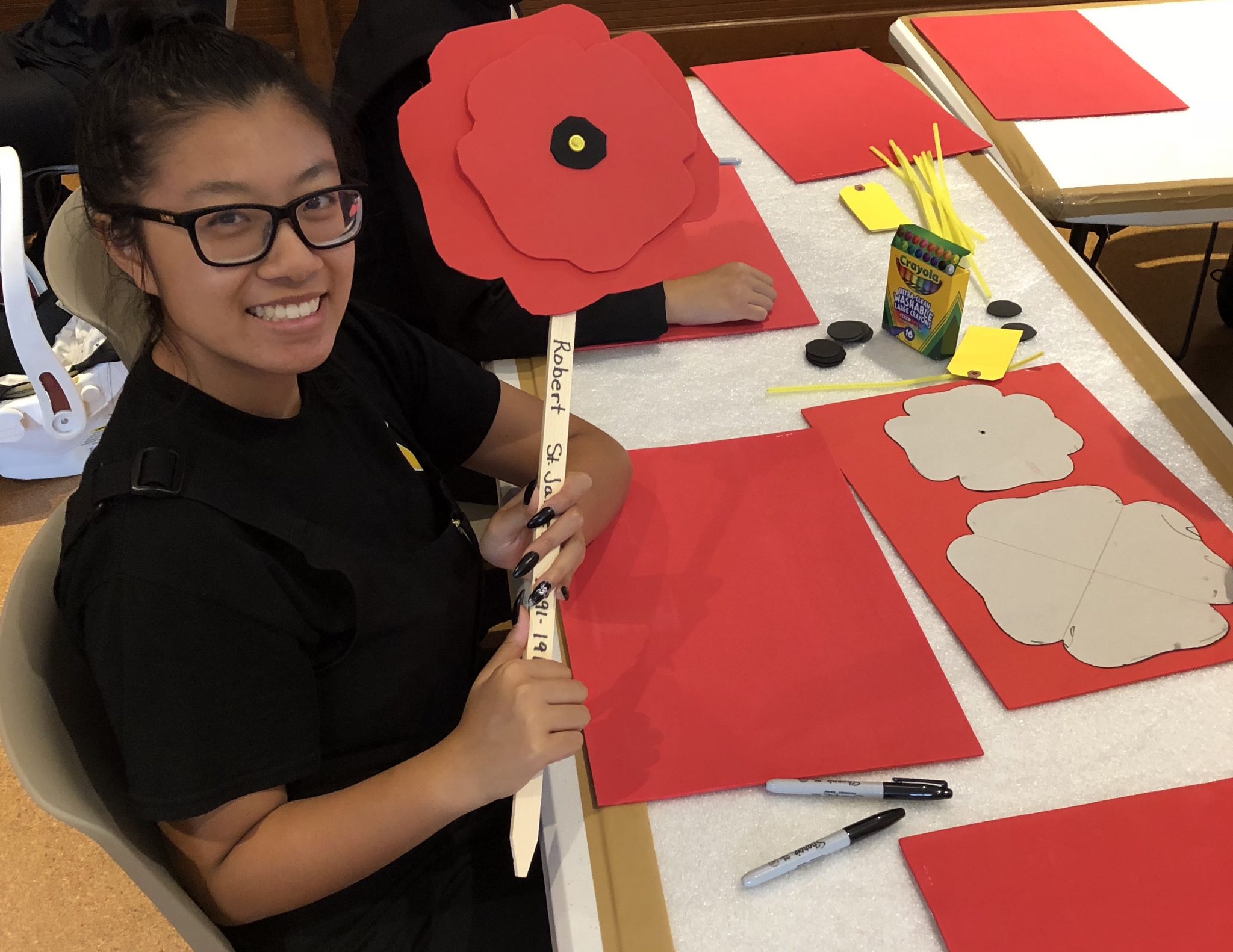 Oakville Band members make poppies to carry in the Veterans Day Parade in honor of World War I.

The Oakville Tiger Band is committed to excellence in each performance, and the students are already engaged in rigorous rehearsals, the Band Parents Association said. In addition, students will have a variety of learning opportunities to augment the experience including curriculum about D-Day and Normandy, France, as well as community service projects with veterans and veterans’ groups.

While students prepare for performances, their parents and the staff of Oakville High School are working to secure the necessary resources for the trip. Many fundraising activities are already underway. The estimated cost to send the band to the D-Day Memorial Parade and Musical Salute to the Veterans is over $500,000. OHS families say they are committed to doing their part, but that they cannot reach their goal without the support of the community.

Community members can donate at a GoFundMe page that parents set up at www.gofundme.com/ohsbandfrance2019.

For more information on the band, visit www.oakvilleband.com.

Prospective donors can find information about the trip under the “France” tab and the “France Donors” tab.

“Your contribution signifies your support of America’s veterans, past and present, but especially those who fought for freedom in Normandy, France,” the Band Parents Association said. “Your support will assist with shipping band instruments overseas, travel and accommodations for the students, and the educational programs associated with this experience. It is our privilege to represent our school as we pay tribute to our veterans. We hope you will stand with us as we do.”