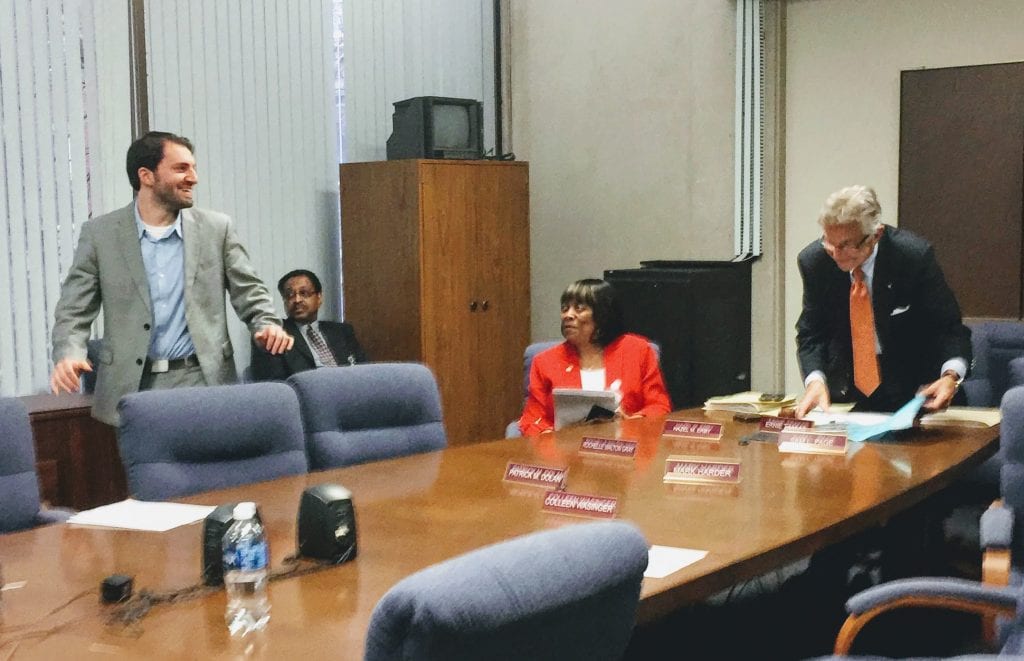 The county’s point man on a Northwest Plaza lease that is spurring a series of court-like County Council hearings testified last week that he landed a “great deal for the county.”

As part of a series of hearings called by 6th District County Councilman Ernie Trakas, R-Oakville, the council heard that and more from Anthony Badino, 31, formerly a top adviser to County Executive Steve Stenger who brokered a 20-year, $69 million lease for more than 100,000 square feet in the former Northwest Plaza mall in St. Ann.

From the time the council began considering the lease in the summer of 2016, the deal attracted attention because the former mall is owned by Robert and David Glarner, who are Stenger’s top campaign donors.

At the county executive’s urging, the county consolidated office space from throughout the county to a new, modern, more secure North County Government Center. Offices that shifted to the St. Ann mall include the Maplewood headquarters of the county Board of Election Commissioners, the north county satellite office of the county assessor and the mold-filled Workforce Development office at North Oaks Plaza in Northwoods.

The county executive has argued that the county’s pivotal role in the revitalization of the formerly distressed mall, now called The Crossings at Northwest, attracted anchor tenants to the mall like Charter along with a ring of new businesses in the area around the mall. St. Ann City Administrator Matt Conley, formerly the deputy city administrator in Crestwood, made the same argument at Trakas’ first hearing to look into the leases.

And last week Badino echoed that argument, saying he wouldn’t do anything differently even with everything he knows now.

“I still think to this day it was a great deal for the county, I’ll stand by that,” Badino said. “I think it was a great project. If any of you have been up there, you’ll see it’s a great project. I can’t speak to the current leases, but many of those (previous) sites were far more expensive, and the one that really wasn’t which was Workforce was the one place that was just an absolutely low rent. And truly if any of you guys had walked through that building, it wasn’t safe for county employees.”

But the county made double rent payments on some of those offices for months, and is still paying rent on some of the offices even as officials say the office space is uninhabitable, critics like 1st District Councilwoman Hazel Erby have pointed out during three hearings Trakas has called since February to look into the lease.

But Stenger feels the case is so strong for the economic rebirth of that corner of the county that he made it the keystone of his latest television commercial in his re-election campaign.

“It was empty, now Northwest Plaza supports over 20 employers with 2,500 employees and $280 million added to our economy,” Stenger said in the commercial. “It was the right thing to do.”

Badino declined comment to the media afterward, but for two hours during the hearing, he defended the deal he struck for Northwest Plaza and said that the outcome was not pre-determined, as some emails showcased in prior hearings appeared to portray.

The idea that Badino, Stenger’s onetime campaign manager, was hired from the beginning for the sole purpose of brokering a deal with the Glarners to rent Northwest Plaza is not accurate, Badino said.

To counter that idea, he said he had toured other potential sites and exchanged “countless” emails with county employees discussing the merits of other locations.

“This idea that it was always The Crossings and only The Crossings — that narrative is out there, but it’s just not true,” Badino said.

Although Trakas repeatedly thanked Badino for appearing at the hearing, at other times the council conference room more closely resembled a courtroom than a typical council hearing. Trakas, an attorney, peppered Badino with questions like he was a witness on the stand.

“You’ve been described as the ‘quarterback’ of this deal — is that fair?” Trakas asked.

Badino agreed it was a fair characterization. But when Trakas took the moniker and ran with it throughout the hearing, Badino added, “Those are your words, not mine.”

When Trakas asked Badino to list all the documents he had looked at with his attorney before testifying, Badino claimed attorney-client privilege.

“Yes,” said Badino, who also declined to name his attorney.

At one point as Trakas hammered away at Badino about an email written by Badino’s negotiating colleague in the county, now-retired Deputy County Counselor Robert Grant, Badino pushed back, “Respectfully, I’ve answered this three times.”

“No, you didn’t, and the record will show that,” Trakas said.

But at the end of two hours of back-and-forth between the two, Trakas and Badino smiled as they shook hands and Trakas thanked Badino for coming before the panel.

Trakas also asked about two post-election payments Stenger’s campaign made to Badino that were issued just as he was negotiating the Northwest Plaza lease in his new role as a non-merit county employee. The payments were bonus payments due to Badino after the election, and Badino had no idea they had not been reported on Stenger’s 2015 campaign-finance statements as outstanding debt until he read it in the newspaper, he said.

“This is money that I was owed,” Badino said, although he acknowledged that he had nothing in writing to confirm that.