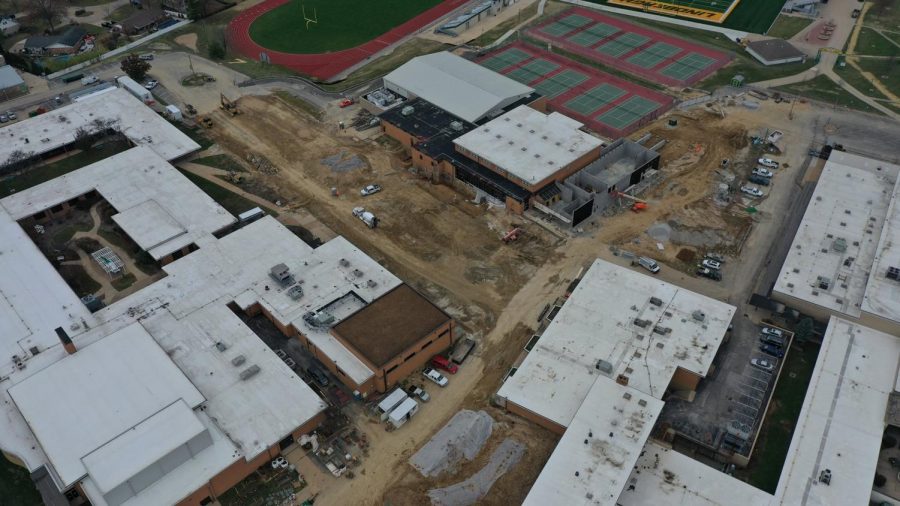 A drone photo of the Proposition R construction at Lindbergh High School.

Two and a half years after Proposition R’s initial passage, progress continues around Lindbergh Schools on Prop R projects, like the installation of secure entry vestibules at various buildings and continued construction on the new high school.

In April 2019, Lindbergh Schools received the $105 million no-tax-rate-increase bond issue after voter approval. Since then, about $92 million has been allocated to five different projects.

Superintendent Tony Lake told The Call the district was able to allocate funding and secure contracts before the pandemic, so it didn’t affect construction or pricing.

The Lindbergh High School Central Utilities Building cost $3.1 million and the lighting and turf at LHS cost $1.66 million. Both of those projects are completed.

Projects to be completed in the future include an LHS storm shelter/new gymnasium, secure entrances at Kennerly Elementary and Truman Middle schools and an $82 million renovation/upgrade to LHS. Lake said the Kennerly project will finish a week after Labor Day and despite an issue with pipes at Truman, it should still finish by the end of the year.

The largest project, at LHS, is expected to take most of 2022 to finish. Lake said it is always difficult to do such large construction projects on crowded school campuses, but the work will be worth it.

“We’ve really tried to schedule large equipment around non-school hours, but sometimes that’s unavoidable,” Lake said. “Everybody at the high school understands it may be a little inconvenient, but in the long term it is going to be worth it.”

Lake said the district still has one more bid package to assign — the demolition of the “300 and 400 Building” on the western side of campus. In its place will be parking for the newer buildings.

According to Lake, the new high school buildings will be more focused on the purpose of each space, versus the old way of thinking which focused on where things like desks and shelves would be placed.

“How can that space be flexible for all kinds of activities? Not just for the next five or 10 years, but the next 50 years,” Lake said.

The new spaces will be more easily transformable into traditional classrooms or bigger spaces based on the needs of the staff.

Lake said he has seen excitement for how the additions to the school will connect all of the campus buildings together.

“We didn’t want to build this new building and have it be separate from the old building,” Lake said. “I may be in a remodelled classroom but when I open my door, here I am in this amazing collaborative space and group area for my kids to work and be in.”

Lake said he likes to thank the community whenever he gets the chance for its support on this project.