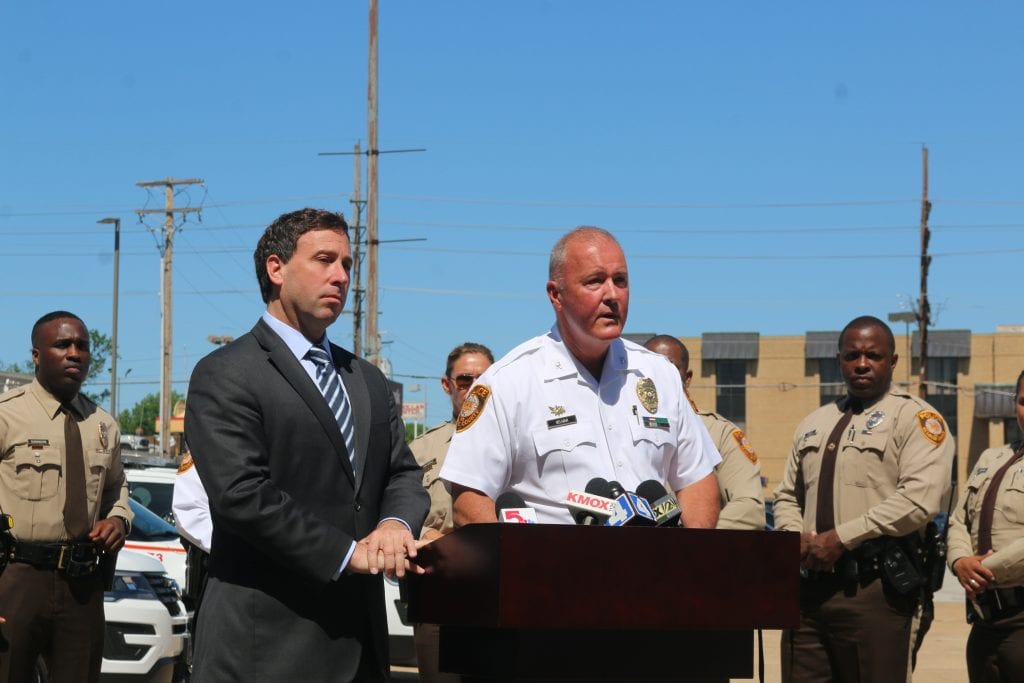 A new special unit of the St. Louis County Police Department funded by Proposition P could help fight crime, increase community engagement and back up beat officers throughout the county.

“It just would not have been possible without Proposition P,” County Executive Steve Stenger said at the June 5 event introducing the community-policing unit, which will cost at least $2 million a year to operate. The SRU will be an “intelligence-gathering unit that is essentially embedded in the community” and isn’t tied to a single geographic area like most county officers.

It’s the first new permanent police unit in decades — so long that police officials were not sure when the department last added a new permanent unit. The new unit’s 16 officers could expand to 24 by the end of the year plus five commanders. A Community Advisory Board for the unit will give feedback from the community on how it’s doing.

The funding comes directly from Prop P, a half-cent countywide sales tax that was overwhelmingly approved by voters last year and went into effect in October.  The department is still working on implementing some other aspects of Prop P, including body cameras and new police precincts in south county and north county. Officers have already received pay raises averaging 30 percent.

The officers were competitively selected from throughout the force and had to have at least three years of experience. They will work in two-officer teams, a key promise of Prop P. Other two-officer cars will be added to local precincts too.

The officers will be based out of the newly renovated North Oaks headquarters, but will respond to emergencies and other calls throughout the county for things like missing Alzheimer’s patients and lost children — calls that would otherwise stretch a local precinct to the max, as beat officers still try to respond to regular radio calls and exercise “neighborhood guardianship” while also responding to something extraordinary beyond typical radio calls.

“This is a longtime dream come true,” police Chief Jon Belmar said. “This really gives the county Police Department the ability to do some things that you may not expect to hear — problem solving, community engagement, these officers are trained in de-escalation. It is going to make the difference in maintaining St. Louis County as the safe place to live and work that we know it has been today, that it has been in the past and will be because of units like this in the future.”

“How many things can you do when you’re tied to the radio?” Belmar said. “… When you’re riding a beat and you may have 12, 15 calls that day and you’re going to be seven or eight reports down…. We have to demand officers exercise community engagement, but when they’re too busy because of call volume, these men and women are able to take care and fill that gap out there and solve those problems for the precincts.”

The officers will undergo special de-escalation training, which should help them respond to multiple types of incidents across the county, Belmar said.

The unit could also experiment with crime forecasting, prediction, prevention, tracking and other crime-fighting techniques that patrol officers might not have the time for on a day-to-day basis.

They could examine gun violence, the “root causes of crime” and addressing one of the Ferguson Commission’s recommendations of bringing leaders and residents of all ages together “as a means of heading off potential crisis,” Stenger said.

The unit will also target persistent offenders to get them off the streets.

Partnerships with community agencies should make it easier to stay on top of crime on a daily basis, the chief and county executive said.