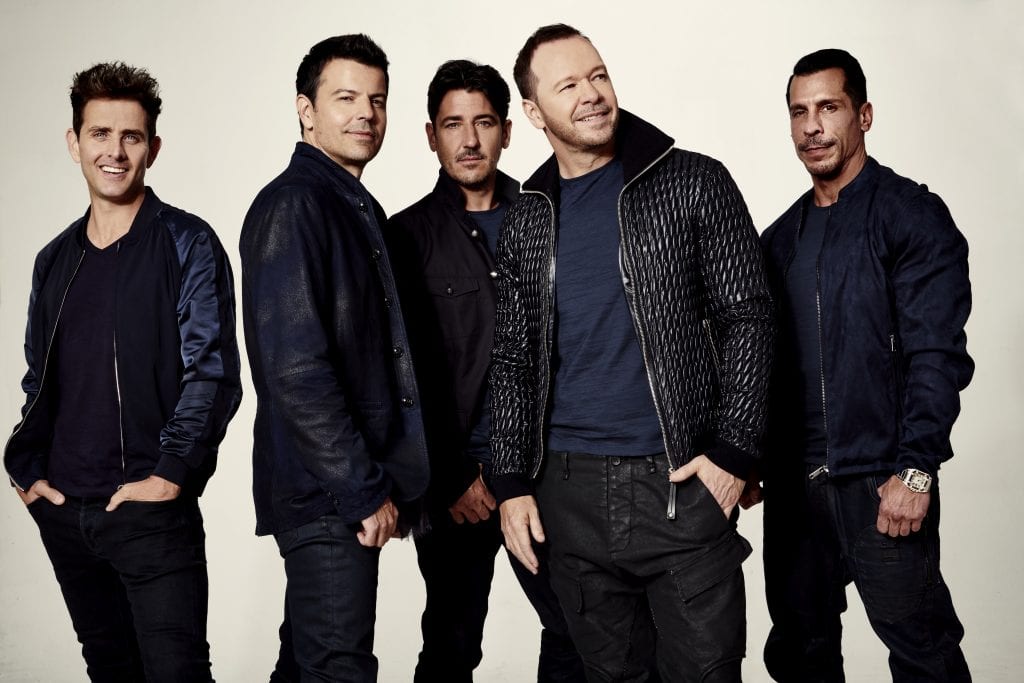 Pictured Above: New Kids on the Block

L. Kent Wolgamott
For the Call

New Kids on the Block will appear Wednesday, May 8 alongside Salt-N-Pepa, Tiffany, Debbie Gibson and Naughty by Nature at the Enterprise Center, 1401 Clark Ave. Tickets start at $28 and can be purchased at www.enterprisecenter.com/events.

Turn on Top 40 radio or MTV in the late ‘80s and the odds were 100 percent you’d hear songs and see videos from New Kids on the Block, Tiffany, Debbie Gibson, Naughty by Nature and Salt-N-Pepa.

Three decades later, you can hear those hits and see the performers again, this time on the stage of “The Mixtape Tour,” which comes to the Enterprise Center in St. Louis Wednesday, May 8.

That’s the name the New Kids gave to the tour that kicks off in early May and runs through mid-July, on which they’ve invited their late 1980s contemporaries — an outing NKOTB’s Danny Wood says is designed to capture that time in music and in the lives of the band’s still loyal legion of fans.

“We took care in putting this package together,” Wood said in a phone interview last week. “If you’re going to call something a ‘Mixtape,’ you better have it represent well. We weren’t exactly sure what the response would be when we announced it. It’s been astounding.”

In addition to being pop stars of that moment, the Mixtape tour mates have other connections, including one that helped catapult NKOTB – which includes Wahlberg, Wood, Jordan Knight, Joey McIntyre and Jonathan Knight – from a fledgling boy band with a failed album under their belt to the top of the pops.

In 1988, teenage Tiffany, then at the peak of her “I Think We’re Alone Now” popularity, brought New Kids on the Block along on her Nation Area tour, placing the boys on stage in front of tens of thousands just when they’d released “Hangin’ Tough,” their breakthrough album.

By the end of the year, “You Got It (The Right Stuff)” was an MTV smash. By mid-1989, “I’ll Be Loving You (Forever)” was a No. 1 hit and, when NKOTB and Tiffany went back out on tour together, they were “co-headliners” with the boys closing the show.

“It makes it special doing things with her,” Wood said of again teaming up with Tiffany. “She gave us a lucky break back then, having us open for her when we were nobodies. Now, we’re kind of returning the favor.”

There’s a contemporary connection between NKOTB and Naughty by Nature as well. It comes on “80s Baby” and “Boys In The Band (Boy Band Anthem),” the two songs the New Kids have released for the tour.

Those tracks are filled with shout-outs and cameos – including nods to Gibson and Salt-N-Pepa – as NKOTB embrace their era and their genre, saluting boy bands all the way back to Motown.

“I sing on them, so I love them,” Wood said of the new songs. “It’s a group decision what we’re going to do and how we’re going to do them. Donnie (Wahlberg) wrote songs with Kay Gee, who’s Naughty by Nature’s DJ. So it was really easy this time. Now we’re trying them live.”

That they’re making new songs and still out touring is something of a surprise for Wood, who thought NKOTB was over when the group disbanded after a decade together in 1994.

“We had a great first run, but after we broke up, I didn’t think we’d get back together,” he said. “The astounding thing to me is it’s now 11 years and we’re about to embark on our biggest tour ever.”

That tour, Wood said, will play to a lot of the same fans who saw NKOTB in their first run – along with a few generations of new fans.

“You look out at the crowd, and if a woman brought her daughter when she was 10 years old 11 years ago, she’s 21 and she’s there with her friends,” he said. “We see a lot of women in their 30s and 40s, they’re the hardcore fans. And they bring their daughters. When we toured with the Backstreet Boys that exposed us to their audience and them to ours, so we see some people of that age.”

Speaking of age, is it tough to sing and dance like you are 20 these days?

“It’s different for each guy,” said Wood, who turns 50 in May. “I work out a lot, over 30 years I’ve been working out. It really isn’t an issue for me. When a tour comes along, I step up my game and I’m ready to go.

“Especially for the guys singing lead, we have to reel in some of the choreography so they can get their breathing right, their singing right.

Wood was in Chicago for rehearsals when we talked. And he wasn’t going to give too much away about the show, although he acknowledged that after the first night that secret will be out on YouTube, Instagram, Twitter, Facebook and any other social media outlet you can find.

“Donnie does the creative side and puts the show together,” Wood said. “He knows us, the four of us so well. He puts it together, we get together and talk about it, rehearse and then, bang, it goes.

“There are songs we know we have to do. We’re going to do all the hits. It’s kind of deciding what other songs to throw in. That’s where the new songs come in. We always do new music to give something extra to the fans and we get to perform them, so they’re fresh for us.”

That said, Wood realizes that most of those who come to see NKOTB— and very likely all of their Mixtape tour mates — are there to hear the hits.

For that reason, he’s baffled and amused when he learns that some veteran artists refuse to play their old songs.

“You experience a lot of people in this business that have careers, it’s funny when they say they have songs that they don’t like to do or won’t do,” he said. “To me, I’m thankful to have them and that people still want to hear them. I love doing them.”

And so does the crowd, which goes wild just like back in the day.

“It’s very similar to the energy from our first run,” he said. “Obviously they’re older, but it’s a lot of the same.”